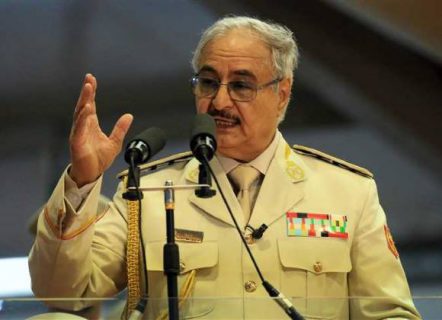 On Thursday, ‘Field Marshal’ Khalifa Haftar, commander of the so-called ‘Libyan National Army’, announced that his forces had begun a “decisive battle” to take Tripoli, declaring that “the hour has struck” to advance and capture the centre of the country’s capital.

This move is particularly alarming in light of rising tensions between Turkey, which backs the Government of National Accord (GNA) in Tripoli, and Egypt, following the signing of the maritime boundary agreement between Ankara and the GNA that shares out a large section of the gas-rich Eastern Mediterranean between the two countries.

The questions now being asked are whether GNA head Fayez Sarraj will take up Turkish President Recep Tayip Erdogan’s offer of military assistance to repulse the offensive, and what response can be expected from Egypt, which along with the UAE is Haftar’s chief sponsor. Could we end up seeing Egyptian and Emirati planes strafing Turkish ships carrying soldiers and supplies to Libyan ports?

Tensions rose between Egypt and Turkey after LNA forces made a further advance on Tripoli from the east and its warplanes bombed the port of Misrata, which is used to deliver military supplies from Turkey to the Islamist groups that form the mainstay of the GNA’s forces.

Erdogan upped the stakes when he announced he would send troops and military equipment to Libya if requested by Sarraj’s government, which draws its legitimacy from the UN-sponsored Skheirat Agreement. This enraged Haftar’s backers – not just Egypt and the UAE, but also Russia and France. The LNA responded by posting a video flaunting its Egyptian-made battle tanks.

The GNA does not have a powerful army. It relies on the forces of Islamist and other armed groups based mainly in Tripoli and Misrata. It enjoys international legitimacy, but this is being eroded as Haftar’s forces threaten and a regional anti-Turkish coalition takes shape comprising Greece, Cyprus, Egypt, Israel, Jordan and Italy. These countries came together under the umbrella of the Eastern Mediterranean Gas Forum – an outwardly energy-related but underlyingly military partnership from which Turkey was excluded, and which Syria and Lebanon refused to join.

Erdogan felt threatened by this alliance that seemed to be encircling his country, and reacted by inviting Sarraj to Istanbul on 27 November to sign the maritime border agreement. This only jacked up the tension and united Turkey’s adversaries against it, prompting Greece to expel the Libyan ambassador.

Libyans have been left waiting for the spark that could ignite yet another round of warfare in their country. If increased external backing enables Haftar’s forces to make serious advances, Erdogan is unlikely to simply concede defeat and abandon his allies. He could well send troops and armour to Tripoli and Misrata to mount a counter-attack, as he did in northern Syria.

Egypt could then send more armour, warplanes and naval vessels in support of Haftar against the GNA, who its state media demonise as a stooge of Islamist extremists and, especially, the reviled Muslim Brotherhood. (Although President Abdelfattah as-Sisi is unlikely to commit ground troops to Libya except as a last resort).

Erdogan has said he doesn’t want to see Libya turned into another Syria. Sisi has declared he is confident that a solution – by implication a military solution – will be found to the Libyan crisis within six months. But if the country becomes the arena of a full-fledged proxy war between Egypt and Turkey, the consequences could be even worse than in Syria.

The Libyan people paid the price for the 2011 NATO assault on their country, which reduced it to a failed state and drove millions of its inhabitants into exile. They will doubtless be made to pay for the next war too. Nato abandoned them after getting rid of Col. Muammar Qadhafi’s regime to their fate at the hands of the militias that ravaged their country. The regional powers are likely to do the same after they play out their rivalries on their soil under the pretext of protecting them and their interests.

One could ask: Can Egypt really afford to wage a war in Libya when it faces a much more serious challenge to its vital water supplies from Ethiopia’s Renaissance Dam? Can Turkey afford to get embroiled in a war hundred of kilometres away when it is already entangled in one in next-door Syria and is surrounded by hostile neighbours?

The reality is that this in not about Libya. It is about the Great Game that is unfolding over control of the Eastern Mediterranean’s gas resources. The first spark of the ‘Gas War’ may be lit in Tripoli, but it could end up destabilising the entire Maghreb and redrawing the maps of the Middle East. And Turkey may be its main target. A trap for it has been carefully set in Libya, just as it was in Kuwait for Saddam Hussein.

Haftar is unlikely to have fired the first shot in the battle for complete control of Tripoli without a green light from Egypt, the UAE, France and Russia, and a blind eye at least from the USA. The ball is now in Erdogan’s court.

0 thoughts on “Libya and the Great Gas Game”