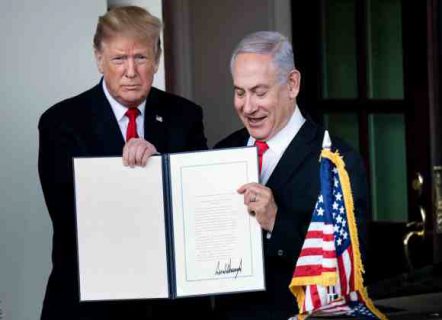 By recognising Israel’s annexation, the US is telling Syria it can only recover its occupied territory by force

US President Donald Trump’s decision to recognise Israeli sovereignty over the occupied Syrian Golan Heights did not come as a surprise. It was only to be expected given the shameful defeatism Arab regimes are displaying these days. Their failure to react forcefully or practically to Trump’s recognition of occupied Jerusalem as Israel’s eternal capital removed any obstacle to his latest move. In such circumstances, he could soon go on to recognise the annexation of the West Bank, which he no longer considers to be ‘occupied’, and to support Israeli designs on other territories.

A senior Hezbollah official who spoke to Raialyoum suggested that there are positive aspects to this decision: It has ruled out any prospect of any Syrian government seeking to recover its occupied lands through negotiations, and left it with no option other than armed resistance in all its variants – ensuring that the country remains within the ‘Resistance Axis’ for decades to come. Successive Israel prime ministers tried to lure Syria out of that axis by holding out the prospect of giving back the Golan Heights through negotiations. Successive US presidents colluded in that deception. But the Netanyahu/Trump duo has made things clearer. It has demonstrated that the negotiations were a lie, the promised peace was a mirage, and the prospective return of the Golan Heights was never more than a big ruse.

The same happened in the case of the 1993 Oslo Accords with the PLO and the 1994 Wadi Arba agreement with Jordan.

With his decision, Trump has unwittingly legitimised the launch of armed resistance to liberate the Golan Heights – as in the West Bank, Gaza, and South Lebanon. So does the near-unanimous international opposition that encountered his endorsement of Israel’s annexation of the Heights.

Israel is trying to use force to impose facts on the ground, while exerting pressure on its allies to accept them as new realities. It has been proven in practice – in South Lebanon, Gaza and during the early stages of the 1973 war – that this policy can only be countered by force.

It was painful to witness some of the reactions to this provocative and insulting American step. Worst of all was the failure of the Syrian opposition to come out clearly and frankly against this theft of a precious part of their country with no legal or moral justification. The Golan Heights do not belong to the current Syrian government or to President Bashar al-Asad, who these factions oppose, but to all Syrians since time immemorial.

The reaction of the Arab regimes was nearly as bad. Some of them dragged their feet before issuing statements opposing the move – for more than a day in the case of some Gulf governments. That was disgraceful in the full sense of the word.

The Israeli occupation state was thrown into a state of confusion by a single missile fired by besieged resistance fighters in Gaza that hit a building north of Tel Aviv. One can only imagine what would happen if many more missiles, much more capable, were to start hurtling down on Israeli targets from a reactivated Golan Front.

Some say this idea is far-fetched. They note that the Golan Front was kept quiet by the Syrian regime for over 40 years. That is true. But times and circumstances have changed. The US has now blessed Israel’s annexation of this part of Syria, after trying for eight years to fragment the entire country but failing due to the resilience of the Syrian army and state. Syrian air defence missiles ended Israel’s impunity in the skies, and now it faces the prospect of being confronting with thousands of ground-to-ground missiles.

The army that succeeded in recapturing most of Syria’s cities is certainly capable of recapturing the Golan Heights. It represents the entire country, and has acquired unprecedented combat expertise and skills. This is not only our judgement: Israeli military experts are saying the same thing.

A final point needs to be mentioned: Trump’s unlimited and naked support for Netanyahu, and his flagrant intervention in the Israeli elections in his favour, suggest that a plan is being prepared. Its features may not emerge until after Netanyahu is re-elected with the support of the president of the world’s strongest power in the world.

What could these be? Waging war on Iran and its allies, after the implementation of the second phase of sanctions that aim to stop all Iranian oil exports? A re-occupation of the Gaza Strip? An assault on Lebanon in a desperate attempt to destroy Hezbollah? Or possibly a military invasion of Syria?

These are hypothetical questions to which we have no answers. What we can say, in all confidence, is that any US plans – whether in Syria, Iran, Lebanon, and Palestine – are doomed to fail, and to backfire catastrophically on those who hatch them. Netanyahu has been bombing Gaza relentlessly, yet still seeks Egypt’s mediation for the third time in less than two months to halt missiles strikes from the Strip. He has ordered more than 200 airstrikes on Syria, but failed to achieve any of his aims, whether removing Iranian forces from the country or preventing missile deliveries to Hezbollah.

The writing, therefore, is on the wall.

Trump Is Netanyahu’s Man and the US Media Are Imbeciles

0 thoughts on “Trump and the Golan Heights”