HOME / WORLD / Human Rights as Seen by the White House: Concessions to Israel Are Notable 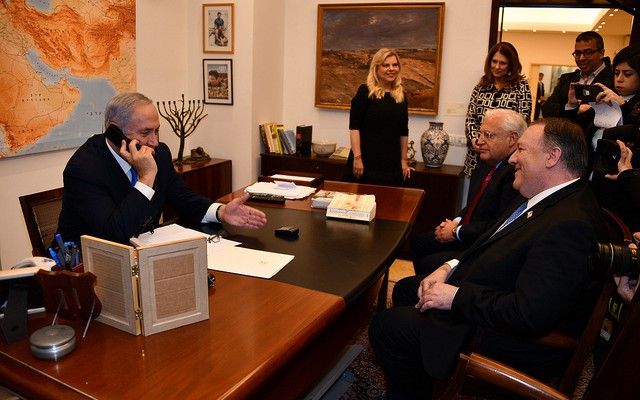 The State Department’s just issued annual Human Rights Report for 2018 is a disgrace, a document so heavily politicized by Secretary of State Mike Pompeo and his crew of hardliners that it might be regarded as a model in how to make something that is black appear to be white. Which is not to say that it is not cleverly composed, quite the contrary, but it uses its choice of words and expressions to mitigate or even dismiss some actual human rights abuses while regarding as more grave other lesser offenses to make political points. And then there is what it does not say, deliberate omissions intended to frame situations in terms favorable to America and its dwindling number of friends in the world.

Not surprisingly, the region that has received the most massaging by the authors of the report is the Middle East, where an effort has been made to depict Israel in a positive light while also denigrating the Palestinians and Iranians. The language used regarding Israel’s occupation of much of the West Bank and the Golan Heights has been particularly welcomed by the government of Prime Minister Benjamin Netanyahu and also by the Israeli media. The word “occupation” or “occupied” to describe the status quo of those areas administered by the Israeli military has been dropped in favor of “Israeli controlled.” The difference is important as occupation has specific legal implications defined by the Geneva Conventions in terms of what the occupying power can and cannot do. To starve and dispossess the Arab inhabitants of the occupied area, as the Israelis are doing to build their settlements, is a war crime. Also, an occupation must have a terminus ante quem date whereby the occupation itself must end. It cannot be permanent.

The new language is a gift to Israel on the eve of its April 9thelection and it allows incumbent Benjamin Netanyahu to claim that he is the candidate best able to obtain concessions from Washington. America’s so-called Ambassador to Israel is a former Trump bankruptcy lawyer named David Friedman who is more involved in serving up Israeli propaganda than in supporting the actual interests of the United States. He probably believes that what is good for Israelis is good for Americans.

Friedman personally supports the view that the illegal Jewish settlements are legitimately part of Israel, choosing to ignore their expansion even though it has long been U.S. policy to oppose them. He has also long sought to change the State Department’s language on the Israeli control of the West Bank and Golan Heights, being particularly concerned about the expression “occupied” which has previously appeared in U.S. government texts describing the situation in the Israel-Palestine region. Friedman now appears to have won the fight over language, to the delight of the Netanyahu government.

And the elimination of “occupied” will apparently be only the first of several gifts intended to bolster Netanyahu’s chances. Senator Lindsey Graham, who also boasts of his close ties to the Israeli Prime Minister, recently stated his intention to initiate legislative action to go one step further and compel the United States to actually recognize Israel’s sovereigntyover the Golan Heights, the Syrian territory that was annexed after fighting in 1967, but which has not been recognized as part of Israel by any other country or international body.

Last Thursday, President Donald Trump announcedthat the Senate vote promoted by Graham would not be necessary, that he would order the State Department to recognize Israeli sovereignty over the area.  This will hugely benefit Bibi and further damage America’s standing in the Middle East and beyond. Some sources are already predicting that recognition of the annexation of the Golan Heights will soon lead to U.S. government recognition of Israel’s sovereignty over much of the West Bank, both ending forever any prospect for a Palestinian state and making it clear that the United States is running a foreign policy to benefit Israel.

There is, of course, much more in the Human Rights Report. The executive summary and first section on Israel and Palestine include text that could easily have come from an Israeli government press release or been featured as an editorial in the New York Post, Washington Post or Wall Street Journal: “Human rights issues included reports of unlawful or arbitrary killings, including Palestinian killings of Israeli civilians and soldiers…From March 30 to December 5, Palestinian militant groups launched more than 1,150 rockets and mortars from the Gaza Strip toward arbitrary or civilian targets in Israel. Gaza-based militants shot and killed one Israeli soldier, and a rocket launched by Gaza-based militants killed one Palestinian laborer in Ashkelon. More than 200 Israelis required treatment from these attacks, mostly for shock. Beginning on March 30, Israeli forces engaged in conflict with Palestinians at the Gaza fence, including armed terrorists, militants who launched incendiary devices into Israel, and unarmed protesters. This occurred during mass protests co-opted by terrorist organization Hamas and dubbed a ‘March of Return.’ The government stated that since March 30 it had been ‘contending with violent attempts led by Hamas to sabotage and destroy Israel’s defensive security infrastructure separating Israel from the Gaza Strip, penetrate Israel’s territory, harm Israeli security forces, overrun Israeli civilian areas, and murder Israeli civilians.’”

A separate report section on Gaza adds “On March 30, Palestinians in Gaza launched the ‘March of Return,’ a series of weekly protests along the fence between Gaza and Israel. The protests, some of which drew tens of thousands of people, and included armed terrorists, militants who launched incendiary devices into Israel, and unarmed protesters, continued throughout the year. Hamas took control of the weekly protests, and many of the protests were violent as encouraged by Hamas.”

Interestingly, the Report does not even have a dedicated section on Iran, only providing a link to a separate document: “Read the State Department’s new report detailing the magnitude of the Iranian regime’s destructive behavior at home and abroad. The report covers Iran’s support for terrorism, its missile program, illicit financial activities, threats to maritime security and cybersecurity, human rights abuses, as well as environmental exploitation.” A second link is to a speech by Secretary of State Mike Pompeo given before the neocon group United Against Nuclear Iran: “The Iranian regime’s track record over the past 40 years has revealed it as among the worst violators of the UN Charter and UN Security Council resolutions – perhaps, indeed, the worst violator. It is truly an outlaw regime.”

Exonerating perpetual victim Israel of all its misdeeds and blaming the Israel-Palestine problem on the Palestinians while also labeling them as “terrorists” is both delusional and propaganda, not responsible analysis. Nor is damning Iran when speaking before a partisan group and falsely calling it a “worst violator of the U.N. Charter and U.N. Security Council resolutions” exactly informative. It is actually Israel that is the worst violator of U.N. Security Council resolutions, a fact that is not mentioned in the Human Rights Report.

One might well question why to write a Human Rights Report at all, but that is something that can be blamed on Congress, which ordered the State Department to prepare it. And one should note the key omission in the document: there is no admission of causality. The United States foreign and national security policies over the past twenty years have created a “human rights” disaster mostly in Asia but also elsewhere, a virtual tsunami rolling over ruined countries that has killed millions of people while also displacing millions more. In reckoning the terrible circumstances being endured by many in so many places there is no mention of the American role. And, unfortunately, there is no section in the Human Rights Report for “United States of America.”

0 thoughts on “Human Rights as Seen by the White House: Concessions to Israel Are Notable”