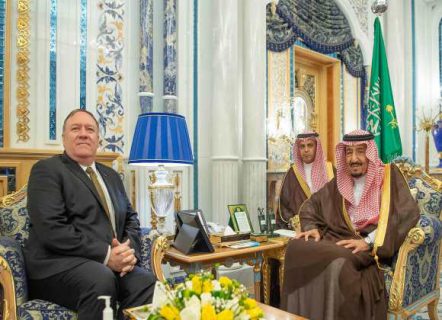 US Secretary of State Mike Pompeo revealed the declared purpose of his hastily- arranged trips to Saudi Arabia and the UAE on Monday just as he was leaving Washington. He told reporters he wanted to build a “global coalition, a coalition not only throughout the Gulf states but in Asia and in Europe, that…. is prepared to push back against the world’s largest state sponsor of terror,” i.e. Iran. What this means in practical terms is that he wants his Gulf hosts to foot the financial bill for this coalition, while being only token members of it as they lack the naval power, and for US naval protection of their oil tankers.

It is striking that Pompeo did not stop over in other Gulf states such as Kuwait, Oman and Qatar which have an equal stake in maritime security and are also reliant on the Strait of Hormuz for their oil exports. That suggests this ‘protection money’ is to be collected exclusively from Riyadh and Abu Dhabi for now.

President Donald Trump had earlier heralded the launch of this fresh campaign of extortion by hinting that the US navy might stop protecting shipping in and near the Strait, where six recent tanker attacks were blamed by US National Security Advisor John Bolton on Iran. Trump tweeted that China, Japan and other countries get most of their oil through that route, “so why are we protecting the shipping lanes for other countries (many years) for zero compensation. All of these countries should be protecting their own ships… We don’t even need to be there in that the U.S. has just become (by far) the largest producer of Energy anywhere in the world!”

The true meaning of these threats is that Trump wants hundreds of billions more dollars from Saudi Arabia and the UAE to pay for US military protection of their tankers, not just at present but also in the past, maybe going back four decades.

Some American military analysts have recently been arguing that the Gulf states need to invest heavily in building up their naval forces and acquiring submarines to protect their ports and shipping. They note that while spending lavishly on their air forces, these countries have tended to neglect this vital area, enabling Iran to gain an advantage in naval power.

Ironically, this supposed imbalance is largely a result of the policy of the US itself. Prevented by sanctions from maintaining much of an air force, Iran concentrated on bolstering its naval power and developed the capacity to build its own ships, submarines and fast patrol boats.

Now, Iran is being hit by yet another round of sanctions following its downing of a US spy drone, this time personally targeting supreme leader Ayatollah Ali Khamenei and eight Revolutionary Guard commanders. This is a deliberately provocative step that reflects the bankruptcy of US policy.

The sanctions are meaningless in themselves. What can they possibly achieve? Prevent Khamenei, who has not set foot outside Iran for decades, from visiting the US? Denying the commanders access to their non-existent American or European bank accounts? Even more tragicomic was the announcement that sanctions are also to be imposed on Foreign Minister Mohamed Javad Zarif. What will they do to him? Ban him from smiling?

The fact of the matter is that there are virtually no sanctions left that the US has not already imposed on Iran over the course of the past 40 years.

But the new sanctions do serve to raise tensions still further and bring the spectre of war closer, which facilitates the primary US purpose. It is no exaggeration to say that all this American war-drum beating and escalation has one overriding aim: to drain the Gulf states’ coffers to the very last drop.