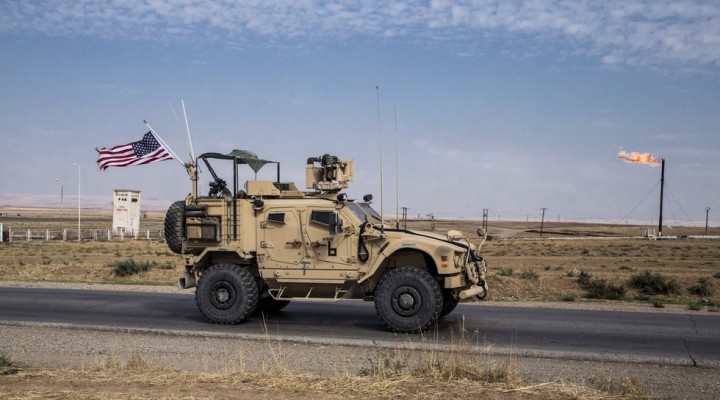 The attack was carried out by Israeli warplanes unlawfully hijacking Lebanese airspace to fire their missiles into Damascus suburbs. It is the fourth such attack in the past month, two having taken place in the same week. Israeli media used the typical “self-defence-mission” arguments to justify the aggression. The EU-funded, UK-based Syrian Observatory for Human Rights (SOHR) announced, in lock-step with Israeli media statements, that the missiles had hit positions “controlled by Iran and their proxies”, and that four “unknown-nationality” gunmen had been killed in the raid.

Israeli Defence Minister Naftali Bennett, bellicose as ever, warned that Israel would not “allow the establishment of an advanced Iranian base in Syria.” Images that were circulated immediately after the attack depicted scenes of civilians returning to inspect the damage, not of Iranian militia. These called into doubt the familiar Israeli claims of self-preservation while attacking a sovereign nation from airspace it does not control and where it is not welcome.

A recent article written for the Brookings Institution, funded by Qatar and Bill Gates, among other US corporate heavyweights, outlines “Israel’s changing regional landscape in light of Covid19.” Effectively, Israel will attempt to seize the opportunity to double down on an already expanding collaboration with the Gulf States to combat the perceived threat of Iran they both face. One interpretation of the article is that Covid-19 offers Israel the opportunity to capitalize on Hezbollah/Syrian/Iranian distraction and the reshuffling of resources towards Covid-19 to strike at the heart of its alliance in Syria. This is being borne out by the uptick in aggression.

These violations of international law committed by Israel are not the only ones being conducted by the US-led alliance, which has, for almost 10 years, maintained a military and economic campaign to topple the Syrian government.

The entire region is reeling from the Covid-19 pandemic that has swept the globe, fuelled by an unprecedented media fear campaign that has driven multiple states into lockdown and isolation, with borders closed and movement curtailed. Yet the US alliance has militarily ignored its own domestic-policy diktats, which have effectively put the majority of the American population under house arrest.

US troop deployment and increased military footprint in north-east Syria

Veteran journalist Abdel Bari Atwan has reported that US intelligence agencies and Washington’s regional allies are exploiting the Covid-19 diversion to consolidate control over Syrian oil resources east of the Euphrates, with the help of their Syrian Democratic Forces (SDF) proxies in the province.

According to locals in the area, the US is not only plundering Syrian oil wealth, but also profiting from the regional agricultural abundance – or rather it is relying on its mercenaries to self-sustain economically through the looting and resale of Syrian resources. In the long run, this saves it the trouble of paying the militia acting under its jurisdiction.

A steady stream of US military-vehicle convoys, loaded with military and logistical equipment have been reinforcing US military presence in the north-east, in particular Qamishli, converging on the illegal US base in Qassrak Tel Baidar.

According to SOHR, a Turkish military convoy of an estimated 20 military vehicles has entered Idlib province, in north-west Syria, in the past two days. This brings the number of vehicles that have entered Syria since the new Russia/Damascus/Turkey-brokered ceasefire in March to 2,830. All these convoys also generate an increase in troop presence – despite the restrictions on movement imposed by Covid-19 health recommendations, which appear not to apply to military personnel.

Such disrespect to Syria’s borders is effectively increasing the risks of spreading Covid-19 in a country that has endured almost 10 years of an externally sponsored war and decades of punishing economic sanctions. These conditions put Syria at high risk, if the virus is irresponsibly introduced into already war-debilitated and displaced communities.

Raqqa is also apparently on the US road map for re-occupation. Syrian war analyst Ibrahim Mohammad has informed me that terrorist media outlets sympathetic to the SDF have reported the arrival of an international team of military experts in a base west of Raqqa. The aim of this team is to assess the possibility of a redeployment of US troops to the area they militarily pulverised, allegedly to “liberate” it from ISIS, in 2018.

Simultaneously, a team of US coalition military personnel has been dispatched to the Khrab A’shq base in the countryside of Ain-Al-Arab, north-east of Aleppo. Observers report the arrival of trucks carrying concrete blocks to fortify the former US base in preparation for the return of US troops.

It is worth noting that Syria is not the destabilized nation it was when the US initiated its base-building campaign on Syrian sovereign territory – an act of banditry that went largely unremarked on by Western media. The local Syrian pushback against Washington’s re-occupation policy has been given impetus by the Syrian Arab Army’s allied victories against the extremist armed groups in the past five years.

The looting of Syrian resources is not confined to US-backed militant structures. Turkish proxies are also exploiting the Covid-19 lull to strip the Al-Ghab area in north-west Hama, bordering Idlib, of its water and irrigation pipes for resale in Turkey. The Al-Nusra Front is accused of dismantling the remains of Zayzoun power plant and Idlib textile factories for sale to Turkish scrap-metal dealers – presumably, to fund Al-Qaeda’s military occupation of Idlib.

Even ISIS has been emboldened by the Covid-19 shutdown. ISIS terrorists, afforded protection from government pursuit by the proximity of the US military base at Al-Tanf, on the border with Jordan, swarmed to attack the eastern countryside of Homs during April 2020. Although the attack was repelled by the Syrian Arab Army, it is indicative of the spoiler role the US will now play to maintain pressure on the Syrian government and military, unaffected by the expectation that a more “humanitarian” response would be appropriate while the world is battling Covid-19.

Sanctions: Ramped-up hybrid war to bring Syria to her knees

The Syrian government has been effective in its handling of the Covid-19 situation. Pragmatic precautions have been taken, and medical institutions, ministries, hospitals and industrial sectors have combined forces and resources to protect the Syrian population with excellent results. Syria has 43 official cases of coronavirus, 19 recoveries and three deaths – a remarkably low number for a country that the West expected (or hoped) would buckle under the strain.

Rather than respond positively to the “humanitarian” crisis generated by Covid-19 – a crisis that impacts most severely upon the Syrian people – the US has effectively maintained its “maximum pressure” campaign, tightening the sanction screws, rather than releasing them.

According to local reports, the Syrian economy is losing 1 trillion Syrian pounds (SYP) per month – that’s around 33.3 billion SYP per day – after the suspension of activity in most economic sectors as part of the measures adopted to fight Covid-19. According to Syrian economist, Ali Kan’an, losses amounted to 2 trillion SYP in March and April, and will rise to an estimated 4 trillion SYP if the lockdown extends until June 2020.

The Syrian government is responding proactively to the dramatic economic downturn, allocating, for example, 1.5 billion SYP to the agricultural sector, in an attempt to support and protect the Syrian economy during these extraordinary times. However, the timing of the Covid-19 media and UN agency hype is turning out to be very convenient for the US coalition, which was about to have to concede the humiliating defeat of its regime-change campaign, as a final military victory was in sight for the Syrian state and its allies.

The former French ambassador to Damascus, Professor Michel Raimbaud, argues, rightly, that sanctions are “more barbaric than military confrontation, which is nearing an end […] it is illegal and immoral. It is a stain on humanity.” For Washington and its allies in the UK and EU to maintain sanctions during the Covid-19 crisis is nothing more than deliberate economic savagery. The situation is apparently being intentionally exploited to push Syria over the edge and into an economic abyss, which serves only the far-from-humanitarian agenda of the US-dominated globalist nations that are jockeying for hegemony in the region.

Covid-19 has brought into sharp relief the US-alliance “humanitarian” fig leaf that is enabling perpetual war across the world. It is nothing more than barbaric that its sadistic economic policies remain firmly in place during an unprecedented global crisis. Whether this crisis is real, exaggerated or orchestrated, it is the people who are suffering, and the US coalition is exploiting their suffering for its own ends.