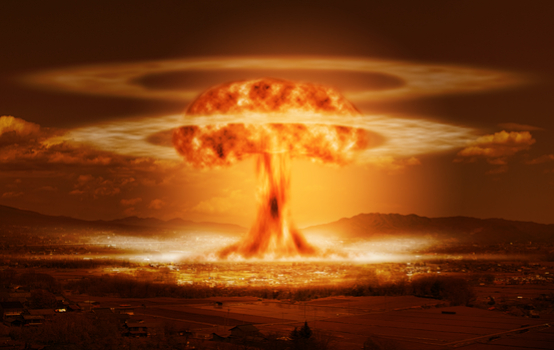 There’s plenty of ammunition against the administration on the weapons front, but this rumor-based story hardly explodes.

The Washington Post recently published an article which quotes an unnamed “senior administration official” and two unnamed “former officials familiar with the deliberations” as saying that during the course of a “meeting of senior officials representing the top national security agencies” on May 15, a discussion was had about the possibility of the United States conducting a “rapid test” of a nuclear weapon.

Furthermore, this testing was proposed as a means of compelling Russia and China to enter into trilateral arms reductions talks designed to find a replacement for the bilateral U.S.-Russian New START Treaty, which expires in February 2021.

The Post report set off an explosion of condemnation across the width and breadth of the nuclear nonproliferation world, with experts universally condemning any resumption of nuclear explosive testing.

“It would be an invitation for other nuclear-armed countries to follow suit,” Daryl Kimball, the Director of the Arms Control Association, tweeted, “the starting gun to an unprecedented arms race.” Kimball argues that the Trump administration is incorrect in believing nuclear threats, including demonstration nuclear tests, can be successful in coercing adversaries. “History shows they are wrong,” Kimball noted.

The Trump administration has accused both Russia and China of violating the Comprehensive Test Ban Treaty by conducting low-yield nuclear explosive tests, allegations both nations deny, and for which the United States has failed to provide any evidence in support. “Sadly (but not surprisingly),” Kimball observes, “Trump’s gaggle of advisors only seem to be interested in making allegations rather than pursuing effective solutions to ensure compliance with the global taboo against nuclear testing established by the [Comprehensive Test Ban Treaty], a treaty they neglect to support.”

The United States has not conducted a nuclear explosive test since 1992, when the administration of President Bill Clinton initiated a voluntary moratorium on nuclear tests in an effort to help pave the way toward the passage of a comprehensive nuclear test ban treaty that would ban all such tests. The Comprehensive Test Ban Treaty grew out of the ever-present dangers posed by the existence of nuclear weapons during the Cold War—their testing poisoned the earth and its atmosphere, while abetting the proliferation of nuclear weapons.

Efforts to prevent the former, in the form of the Limited Test Ban Treaty, banning atmospheric testing, and the Threshold Test Ban Treaty, limiting the size of nuclear tests to 150 kilotons (approximately ten times the size of the explosions that destroyed Hiroshima and Nagasaki at the end of World War 2), were both signed by presidents and ratified by the U.S. Senate. A treaty intended to end all nuclear testing—the Comprehensive Test Ban Treaty—was signed by President Clinton but failed to receive Senate ratification.

The policies of successive administrations since then have sought to keep open the possibility of resumed nuclear testing while continuing to abide by a moratorium on nuclear testing which has been in place since 1992. The dual nature of this policy is perhaps best captured in a letter to Senator Pete Dominici, dated June 25, 2007, from Secretary of State Condoleezza Rice, noting that the policies being pursued by the administration of President George W. Bush made it “more likely that the United States would be able to continue its voluntary nuclear testing moratorium. We cannot, however, provide guarantees regarding the voluntary moratorium. We may find at some future time that we cannot diagnose or remedy a problem in a warhead critical to the U.S. nuclear deterrent without conducting a nuclear test.”

This policy was furthered by President Barack Obama. While failing to advance the issue of Senate ratification of the Comprehensive Test Ban Treaty, the Obama administration supported policies that modernized the U.S. nuclear arsenal and “develop a responsive nuclear infrastructure to support further reductions in the number of deployed and non-deployed weapons.” This was done “without introducing new nuclear weapons for new missions into the U.S. arsenal” and “without relying on nuclear explosive testing for stockpile maintenance.”

The Obama administration’s position was born out of a general agreement within the National Nuclear Security Administration (NNSA), that the national weapons laboratories responsible for nuclear weapons design, manufacture and maintenance have more knowledge about U.S. nuclear weapons and how they operate today than they did during the era of active nuclear testing, and that there was no need to resume explosive testing to maintain the U.S. stockpile.

This does not mean that there is universal acceptance of a policy of no testing, or that such a policy is good for the security of the United States. One of the most vociferous proponents of a return to nuclear testing is retired Navy Vice Admiral Robert M. Monroe. Trained as a surface warfare officer, Admiral Monroe went on to serve as the Director of the Defense Nuclear Agency. In this role he led the charge against President Jimmy Carter’s efforts to move forward with the Comprehensive Test Ban Treaty during his administration. After retiring, Admiral Moore joined Bechtel, where he worked issues pertaining to “Cooperative Threat Reduction” in the former Soviet Union, as well as Department of Energy nonproliferation programs, including those relating to nuclear explosive testing.

From Admiral Moore’s perspective, “[t]he nuclear weapons business is based upon the world of science, which depends upon on the scientific method, which centers on testing. As a substitute for testing, we’ve attempted to create computer codes which simulate a nuclear detonation. It is highly unwise to stake America’s continued existence on this.”

As Moore points out, “[a] nuclear weapon is made up of about 6,000 parts, and most of them change with age.  Nuclear weapons design is both an art and a science, and the intuition of experienced designers plays a big role. Computers don’t understand this…the slightest change—in any direction—may cause total failure to detonate”, something nuclear weapons designers call “falling off the cliff.” Moreover, according to Moore, “during the testing era, key design changes made at the last minute were often not recorded, nor were the drawings updated, because of the Cold War’s pressure of time. Thus, today’s computer codes, built on old test data, may be fatally incorrect.” Moore, and other experts like him, advocate for the resumption of underground nuclear testing “without question.”

What Admiral Moore’s comments illustrate is that the issue of securing America’s nuclear stockpile without resorting to nuclear explosive testing is not, as many assume, a closed issue. John C. Hopkins, the former head of the Los Alamos Nuclear Test division, has publicly expressed his own concerns “at the steady degradation of U.S. nuclear test readiness—that is, the capability of the United States to test its nuclear weapons should the need to do so arise,” noting that a review “of assessments made by the Department of Energy (DOE) of U.S. nuclear test readiness leads me to question whether the DOE has, after almost 25 years of being out of the testing business, any realistic appreciation for what nuclear testing involves or how to stay prepared to do it again within 24–36 months, as legally required by Presidential Decision Directive 15 (1993).”

It is in this last context that The Washington Post story must be fully assessed. Even if one accepts at face value the article’s contention that the idea of a “rapid test” was proposed in the context of exerting pressure on both the Russians and Chinese to enter into strategic arms reduction negotiations, one must also embrace the result—the proposal was rejected in favor of other, unspecified policy options. That the topic of a “rapid test” was raised in a national security meeting designed to elicit policy options is not, in and of itself, unusual. Every administration since Bill Clinton has had to wrestle with the question of how to secure an aging nuclear stockpile without the benefit of testing. The fact that every administration has, to date, decided that the best course of action was to adhere to a ban on nuclear explosive testing and to instead rely upon advanced computer simulations to produce the necessary calculations does not mean that expert opinion does not exist to the contrary.

Moreover, The Post fails to dig deeper into what exactly a “rapid test” would constitute. Since the time of the Clinton administration, the United States has spent millions of dollars every year maintaining nuclear testing capability so that testing could resume within 24-36 months after a decision had been made to do so. This timeframe, which is a limiting feature that cannot be altered by any policy decision, does not lend itself to pressuring Russia and China to negotiate, even if they were prone to such pressure; it is nonsensical to believe that a nuclear explosive test carried out in 2022 or 2023 could somehow convince either Russia or China to enter negotiations on a treaty which expires in February 2021.

This fact seems to have escaped the paper’s reporters and their editors, who seem more inclined to publish unsustainable rumor as fact, and breathe relevance into words which, simply put, could not exist. If the Trump administration had, in fact, decided to resume nuclear explosive testing, then there would be cause for concern and debate where viewpoints such as those expressed by Moore and Hopkins could—and would—be challenged publicly. I personally am vehemently opposed to any resumption of nuclear weapons testing, and would be among those leading the charge against any such policy. But this isn’t what happened, and for the Washington Post to trigger a politicized debate over a non-existent policy problem is the ultimate definition of irresponsible journalism.