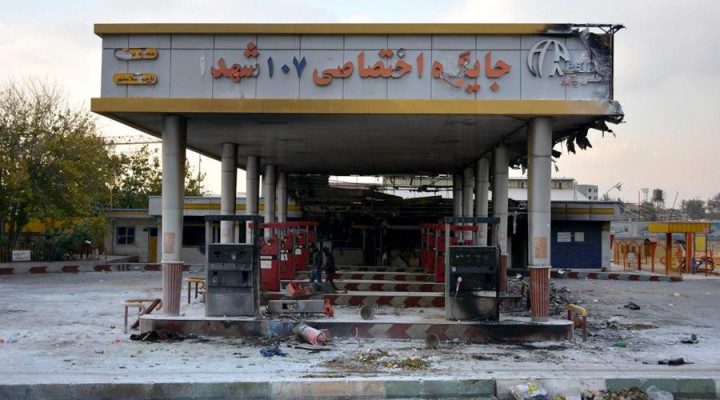 On November 15, a wave of protests engulfed over 100 Iranian cities as the government resorted to an extremely unpopular measure: a fuel tax hike of as much as 300%, without a semblance of a PR campaign to explain the reasons.

Iranians, after all, have reflexively condemned subsidy removals for years now – especially related to cheap gasoline. If you are unemployed or underemployed in Iran, especially in big cities and towns, Plan A is always to pursue a second career as a taxi driver.

Protests started as overwhelmingly peaceful. But in some cases, especially in Tehran, Shiraz, Sirjan and Shahriar, a suburb of Tehran, they quickly degenerated into weaponized riots – complete with vandalizing public property, attacks on the police and torching of at least 700 bank outlets. Much like the confrontations in Hong Kong since June.

President Rouhani, aware of the social backlash, tactfully insisted that unarmed and innocent civilians arrested during the protests should be released. There are no conclusive figures, but Iranian diplomats admit, off the record, that as many as 7,000 people may have been arrested. Tehran’s judiciary system denies it.

According to Iran’s Interior Minister Abdolreza Rahmani Fazli, as many as 200,000 people took part in the protests nationwide. According to the Intelligence Ministry, 79 people were arrested in connection with the riots only in Khuzestan province – including three teams, supported by “a Persian Gulf state,” which supposedly coordinated attacks on government centers and security/police forces.

The Intelligence Ministry said it had arrested eight “CIA operatives,” accused of being instrumental in inciting the riots.

Now compare it with the official position by the IRGC. The chief commander of the IRGC, Major General Hossein Salami, stressed riots were conducted by “thugs” linked to the US-supported Mujahedin-e Khalq (MKO), which has less than zero support inside Iran, and with added interference by the US, Israel and Saudi Arabia.

Salami also framed the riots as directly linked to “psychological pressure” from the Trump administration’s relentless “maximum pressure” campaign against Tehran. He directly connected the protests degenerating into riots in Iran with foreign interference in protests in Lebanon and Iraq.

Elijah Magnier has shown how Moqtada al-Sadr denied responsibility for the burning down of the Iranian consulate in Najaf – which was set on fire three times in November during protests in southern Iraq.

Tehran, via government spokesman Ali Rabiei, is adamant: “According to our information, the attack on the consulate was not perpetrated by the Iraqi people, it was an organized attack.”

Predictably, the American narrative framed Lebanon and Iraq – where protests were overwhelmingly against local government corruption and incompetence, high unemployment, and abysmal living standards – as a region-wide insurgency against Iranian power.

Analyst Sharmine Narwani, based on the latest serious polls in Iran, completely debunked the American narrative.

It’s a complex picture. Fifty-five percent of Iranians do blame government corruption and mismanagement for the dire state of the economy, while 38% blame the illegal US sanctions. At the same time, 70% of Iranians favor national self-sufficiency – which is what Supreme Leader Ayatollah Khamenei has been emphasizing – instead of more foreign trade.

On sanctions, no less than 83% agree they exerted a serious impact on their lives. Mostly because of sanctions, according to World Bank figures, Iranian GDP per capita has shrunk to roughly $6,000.

The bad news for the Rouhani administration is that 58% of Iranians blame his team for corruption and mismanagement – and they are essentially correct. Team Rouhani’s promises of a better life after the JCPOA obviously did not materialize. In the short term, the political winners are bound to be the principlists – which insist there’s no possible entente cordiale with Washington at any level.

The polls also reveal, significantly, massive popular support for Tehran’s foreign and military policy – especially on Syria and Iraq. The most popular leaders in Iran are legendary Quds Force commander Gen. Soleimani (a whopping 82%), followed by Foreign Minister Mohammad Javad Zarif (67%) and the head of the Judiciary Ebrahim Raisi (64%).

The key takeaway is that at least half and on some issues two-thirds of Iran’s popular opinion essentially support the government in Tehran – not as much economically but certainly in political terms. As Narwani summarizes it, “so far Iranians have chosen security and stability over upheaval every time.”

What’s certain is that Tehran won’t deviate from a strategy that may be defined as  “maximum counter-pressure” – on multiple fronts. Iranian banks have been cut off from SWIFT by the US since 2018. So efforts are intensifying to link Iran’s SEPAM system with the Russian SPFS and the Chinese CIPS – alternative interbank paying systems.

Tehran continues to sell oil – as Persian Gulf traders have repeatedly confirmed to me since last summer. Digital tracking agency Tankertrackers.com concurs. The top two destinations are China and Syria. Volumes hover around 700,000 barrels a day. Beijing has solemnly ignored every sanction threat from Washington regarding oil trading with Iran.

Khamenei, earlier this month, was adamant: “The US policy of maximum pressure has failed. The Americans presumed that they can force Iran to make concessions and bring it to its knees by focusing on maximum pressure, especially in the area of economy, but they have troubled themselves.”

In fact “maximum counter-pressure” is reaching a whole new level.

That came out of quite a significant meeting in Tehran, between Khanzadi and the deputy chief of the Chinese Joint Staff Department, Major General Shao Yuanming.

So welcome to Maritime Security Belt. In effect from December 27th. Smack on the Indian Ocean – the alleged privileged territory of Washington’s Indo-Pacific policy. And uniting the three key nodes of Eurasia integration: Russia, China and Iran.

But geopolitically, this packs a way more significant game-changing punch. Russia may have conducted naval joint drills with Iran on the Caspian Sea. But a complex drill, including China, in the Indian Ocean, is a whole new ball game.

Yuanming put it in a way that every student of Mahan, Spykman and Brzezinski easily understands: “Seas, which are used as a platform for conducting global commerce, cannot be exclusively beneficial to certain powers.”  So start paying attention to Russia, China and Iran being quite active not only across the Heartland but also across the Rimland.

0 thoughts on “What really happened in Iran?”