HOME / Economy / As One of the Largest Bailouts in History Looms, “Crisis-Ridden” Corporations Reap Record Profits 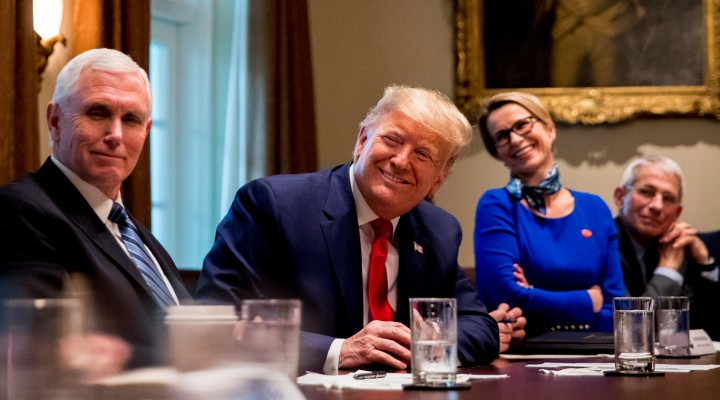 Once again it appears that big business will get bailed out while the American people get sold out.

MPN– Hospitals overflowing with sick and dying patients. Overworked staff risking their lives wearing garbage bags as makeshift protective equipment against an invisible but deadly virus. Refrigerated containers left outside medical facilities, filling with the dead. Mass graves being dug in the city. It is like something out of a horror movie. But it is very real and is happening right now in America. “We are doing the best we can,” Derrick Smith, a certified registered nurse anesthetist in New York City told MintPress last week, “but people are dying left and right, no exaggeration.” “I’ve never imagined or seen our healthcare system take such a beating before,” he said. “This is something that none of us have ever really seen.”

Despite leaving nearly every other sector of the economy in ruins, the COVID-19 pandemic has been a windfall for the for-profit healthcare industry, which is expecting to make dazzling profits off of the crisis. For example, UnitedHealthcare – the country’s largest insurer, controlling over 50,000 doctors – is predicted to announce yearly profits of over $21 billion later today. That is according to former healthcare industry director turned industry whistleblower and reform advocate Wendell Potter, who yesterday accused the conglomerate of some highly unethical practices in order to cut corners.

Just as the pandemic was first hitting America, Potter says, UnitedHealthcare began strongarming its doctors into accepting pay cuts of up to 60 percent in an effort to nickel and dime employees and ensure they were operating with the minimum number of staff possible. As a result, even patients at in-network hospitals risk receiving surprise bills after being treated by out-of-house medical professionals, seeing as UnitedHealthcare does not directly employ enough staff.

“Patients are getting crushed financially because of UnitedHealth’s actions. And, believe it or not, some doctors may as well,” Potter says, concluding that, “As ER docs & other physicians risk their lives treating COVID-19 patients, UnitedHealth is playing games to rake in profits.”

Other big corporations winning big from coronavirus are Amazon and videoconferencing software Zoom. Amazon CEO Jeff Bezos has seen his fortune swell by over $24 billion, while Zoom founder Eric Yuan’s fortune has more than doubled of late, up to $7.4 billion.

At least the healthcare industry is doing something productive as it rakes in huge profits. Other corporations stand to make billions even as their businesses are completely idle.

Free rent and welfare… for corporations

Filming has been suspended, movie theaters closed, Disney’s stores and hotels are shuttered. Disneyland is gathering dust, the once teeming theme parks now eerily silent. The company has furloughed 43,000 staff. And yet Disney’s stock price is rallying; from $85.76 per share in March to over $106 today, shareholders have seen the value of their holdings increase by 20 percent. The reason? Because of a quarter-trillion dollar bailout of the hotel and entertainment industry that will see the largest corporations like Disney plied with cash, even as ordinary Americans will have to wait up to five months for a meager $1,200 government check. People without a bank account – i.e. the poorest in society – will be the last to receive aid.

Along with the hotel industry, USA Today suggests that large airlines are the “big winners” from Trump’s bailout package. This, despite the fact that industry is hemorrhaging money. Virtually nobody is flying, and airlines have had to refund huge numbers of travelers. Yet stockholders in big airline corporations are smiling, thanks to news of a similar bailout. Since April 3, American Airlines shares have rallied from $9.39 to $11.94 today, a 27 percent surge. The government also rushed through laws ensuring that airlines will not have to pay rent for the next six months. Needless to say, there has not been similar legislation for American citizens laid off or self-isolating due to COVID-19.

While the government insists there will be some strings attached to one of the greatest corporate bailouts in history, it is clear that, just like in 2008, they will not insist on transformative changes within the industry.

Indeed big questions are not even being asked. How many hotels are offering their empty rooms to the homeless or to people needing to self-isolate away from family members or housemates? How many have offered to be turned into makeshift hospitals? In France, the nationalized high-speed rail service is ferrying the sick around the country from coronavirus hotspots to hospitals with free beds. Couldn’t unused planes be doing the same thing in the United States? And if the government is essentially going to buy out every hotel or airline in the country, why not nationalize them outright and use the future dividends from a profitable industry to pay for better schools, roads and fund social programs? Why not at least stipulate that all corporations taking money accept workers on their boards or pay all employees at least $15 per hour? Does it not make sense that a public health emergency requires a public healthcare system?

Unfortunately, it is abundantly clear for whom the government works in the U.S., and this is underlined by the lack of questioning or conditions on the bailout. Once again, it appears that big business will get bailed out and the people are getting sold out.

A New World Is Being Born: What Will It Be?

0 thoughts on “As One of the Largest Bailouts in History Looms, “Crisis-Ridden” Corporations Reap Record Profits”