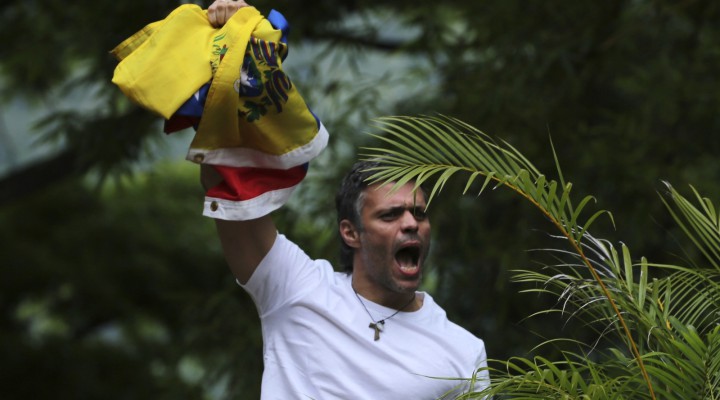 MPN- As his statement yesterday and his past have revealed, Leopoldo López’s machinations will be in service to the U.S. government, his greatest political patron, as opposed to the people of his country.

Amid the early morning chaos of yesterday’s failed US backed coup attempt in Venezuela, Leopoldo López — the political mentor and top adviser to self-declared “Interim President” Juan Guaidó — made a startling claim to a group of international journalists gathered outside the La Carlota airbase in the Venezuelan capital of Caracas.

According to Bloomberg reporter Andrew Rosati, who was present for López’s and Guaidó’s announcement of the now-failed “military uprising,” López told him and other foreign reporters that he and Guaidó — after speaking to high-ranking government officials throughout the Americas and their political allies within Venezuela — wanted the United States government to be a part of the government they hope to install if they succeed in ousting Venezuela’s current president, Nicolás Maduro.

The claim received very little media attention, given the day’s events, despite the fact that López, long believed to be the power behind Guaidó and the architect of his rise to power, stated that Guaidó’s parallel government would aim to essentially turn the country into a colony of the United States. López did not elaborate as to the extent of the role he and Guaidó hoped to see the U.S. play in a future Venezuelan government. Yet, any planned role for the U.S. government in Venezuela’s government would gravely undermine Venezuela’s national sovereignty and any semblance of independence of a future Guaidó-led administration.

84 people are talking about this

López’s statement stands in stark contrast to Guaidó’s public claims that he seeks to return political power to the Venezuelan people from the “dictator” and “usurper,” Guaidó’s words of choice to describe the recently re-elected Maduro. Indeed, it seems to have been a surprisingly honest admission from López that reveals that Guaidó’s parallel government — the existence of which was prompted by a phone call from U.S. Vice President Mike Pence to Guaidó — is actively seeking to install foreign-directed rule in Venezuela.

Past statements made by National Security Adviser John Bolton have made it clear that the Trump administration’s key interest in Venezuela is its massive oil reserves, which are the largest proven oil reserves in the world. If López’s statement is to be believed, the role the U.S. would play in a Guaidó-led government would likely involve the U.S. directing the exploitation and development of Venezuela’s oil sector, where U.S. companies like Chevron have long been involved. While Chevron and Halliburtoncontinue to maintain a presence in Venezuela’s oil sector, U.S. oil companies ExxonMobil and ConocoPhillips were ousted from the country by former President Hugo Chávez in 2007, who nationalized their Venezuelan assets.

López a finger of the U.S.’ now-visible hand

López’s appearance at the coup announcement early Tuesday morning initially made the claims of an uprising seem more legitimate than they were later proven to be, as López has long been under house arrest in his eastern Caracas mansion. López was first placed under house arrest in 2014 for his alleged role in planning violent demonstrations, often referred to as guarimbas, in an effort to oust the Maduro-led government. It is currently unknown how López escaped house arrest, though the prevailing assumption has been that his escape was aided by some of the military defectors who partook in the failed coup attempt.

Under house arrest and unable to continue his prior role as the “poster boy” for the U.S.-backed Venezuelan opposition, López maneuvered the political party he founded, Popular Will (Voluntad Popular), to prominence in the opposition-controlled National Assembly and tapped Guaidó — then serving his first term as an assembly member — to serve as the party’s public face. According to Bloomberg, López chose Guaidó only after several other prominent Popular Will members had been forced into exile.

López and his political activities in Venezuela have long been funded by the United States. As MintPress reported in 2017, López’s first political party, Justice First (Primero Justicia), as well as his current Popular Will Party have been bankrolled by the U.S. government’s National Endowment for Democracy (NED) and its offshoots, including the International Republican Institute (IRI) and the National Democratic Institute (NDI). Prior to the failed 2002 coup attempt against then-President Hugo Chávez, in which López played an active role, López made frequent visits to IRI headquarters in Washington and held meetings with members of the George W. Bush administration.

While López is no longer the public face of the current U.S.-backed efforts to oust Venezuela’s current government, he is still very much involved, as yesterday’s events show. Having sought refuge first in the Chilean diplomatic mission and now in the Spanish Embassy in Caracas, López is likely to continue to orchestrate and direct events as Guaidó’s top adviser from the safety of foreign embassies of Guaidó-supporting countries, much as he did while under house arrest. As his statement yesterday and his past have revealed, López’s machinations will be in service to the U.S. government, his greatest political patron, as opposed to the people of his country.