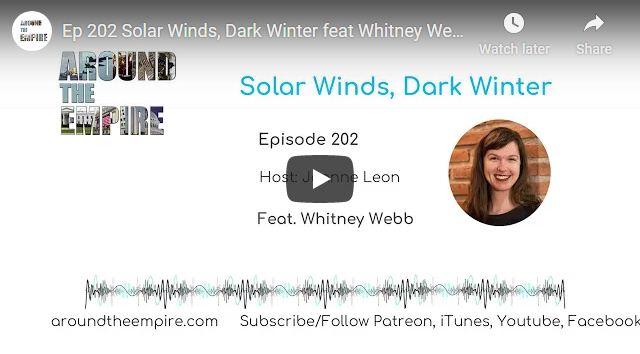 Guest: Whitney Webb. We talk about the Solar Winds hack that has been reported by the media since December, including an important update on January 6 which was largely drowned out by the January 6 incidents at the Capitol and the 24/7 media blast that followed.

Guest: Whitney Webb. We talk about the Solar Winds hack that has been reported by the media since December, including an important update on January 6 which was largely drowned out by the January 6 incidents at the Capitol and the 24/7 media blast that followed.

News articles about the Solar Winds hack with warnings about impending disaster continue to be published frequently. An article in Lawfare today titled “The SolarWinds Hack Can Directly Affect Control Systems” said: “As Microsoft’s CEO pointed out, what’s been seen so far is only the ‘first phase’ of the attack that targeted IT systems in the government and companies large and small. While disconnecting the SolarWinds Orion system from one’s IT system may mitigate some of the damage, it neglects the possibility that potentially destructive malware could easily have been planted on OT systems as well. And the impact of OT breaches can be more significant than mere IT penetration; OT consists of systems that affect the physical world.”… “By attacking the SolarWinds platform, the Russians were able to get a “two-fer,” that is, persistent access and data exfiltration from the IT networks and access to control system devices and control system OT networks.”  Lawfare directly attributes all of this to the Russian government and it should be noted that Lawfare is very well connected to the national security establishment and has been one of the most extreme promoters of the Russiagate narrative for the past four years.

In the story about the Solar Winds hack, some key cybersecurity entities familiar to us from Russiagate reappear, like CrowdStrike and FireEye as do some familiar figures like Ghilaine Maxwell’s sister, Isabel. Reports of a massive and ongoing compromise to a broad range of government and private networks with a weak attribution claim about Russian state-sponsored hackers began to spread like a 2016 DNC “hack” narrative deja vu. Dire warnings about dark winters and ruinous cybersecurity attacks have been put on a loop setting, predicting unprecedented economic and institutional impact. Some new entities have emerged and some old figures have reappeared in the latest impending crisis. At the same time there have been rigorous efforts to shift the threat target toward domestic terrorism and dissent.

One of the disturbing aspects of the whole thing is that long before the reports about the Solar Winds hack, similar but more vague warnings along these lines have been put out into the public by entities whose exercises and simulations have tended to actually occur in real life.