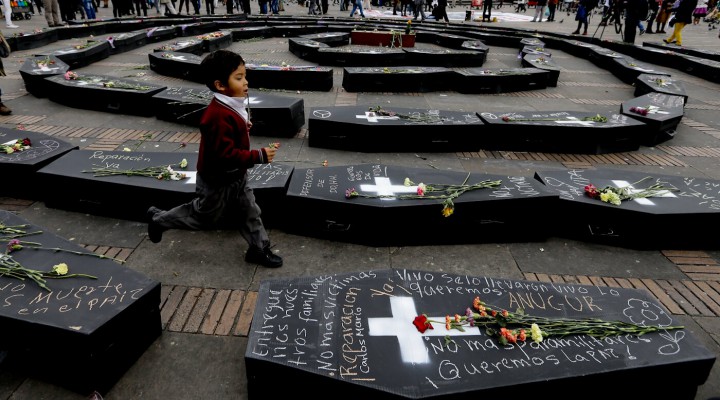 The dichotomy between Washington’s relationship with Venezuela and Colombia is yet another clear example that the public justifications for the U.S.’s Latin America policy are little more than window dressing for the U.S.-backed expansion of neo-fascist governments throughout Latin America.

Several troubling situations are currently playing out across Colombia, yet the country’s continuing downward spiral into drug-fueled and politically-motivated violence has caused little concern in Washington, offering yet another clear indication that the U.S.’ current posturing on Venezuela is hardly motivated by concerns about “democracy,” “human rights,” or the welfare of the Venezuelan people.

This, of course, can hardly be considered surprising, given that Colombia is a top U.S. ally whose government has long been closely aligned with Washington’s interests. However, although the lack of U.S. government or media attention to Colombia may effectively hide it from the American public, the country is becoming increasingly lawless, with cocaine production reaching new record levels and the government sanctioning the mass murder of the country’s largest indigenous group. Not only that but since Colombia’s new president, Iván Duque, came to power late last year, the number of indigenous social leaders who have been murdered has spiked to the highest levels in over a decade.

Ultimately, the lack of media coverage of Colombia’s humanitarian crises, which have large implications for the Americas as a whole, is a telling example of how such crises are regularly weaponized by governments and media to exclusively target governments it wishes to pressure or overthrow, while turning a blind eye to those same or worse acts when committed by an allied nation.

Though it was Barack Obama who first deemed Venezuela a “national security threat” and reinitiated draconian sanctions against the oil-rich nation, the Trump administration has greatly increased the sanctions targeting Venezuela, often citing its government’s alleged participation in illegal drug trafficking as justification for doing so. However, the U.S. has offered little in the way of concrete evidence to back up those allegations.

According to UN figures released last September, Colombia’s cocaine production has again broken records, with the country producing an estimated 1,379 tons of cocaine in 2017, the latest year for which such statistics exist. That figure is a 31 percent increase in cocaine production from 2016. 2016 itself was a record-breaking year with cocaine production gaining by 50 percent over 2015 levels.

Though Trump had threatened to decertify former Colombian President Juan Manuel Santos’ government over the rapid growth of cocaine production, he ultimately gave Colombia a pass in the U.S.’ annual determination of countries considered to be “major drug transit or major drug producing” areas “because the Colombian National Police and Armed Forces are close law enforcement and security partners of the United States in the Western Hemisphere.”

The document also described Venezuela, along with its regional ally Bolivia, as “countries that have failed demonstrably during the previous 12 months to adhere to their obligations under international counternarcotics agreements” despite the fact that Bolivia had the fewest illegal coca crops of any South American country that year. Since getting a free pass from the Trump administration, Colombia’s current president, Iván Duque, has signaled his hopes to revive a failed, U.S.-backed program to indiscriminately spray suspected coca fields with the infamous Monsanto product glyphosate to reduce cocaine production.

Though the U.S. government and Western media have traditionally placed the blame on leftist guerillas in Colombia, like the FARC, the 2016 peace deal that saw the FARC abandon the drug trade has removed this convenient scapegoat and highlighted the long-standing role of the Colombian military and prominent right-wing politicians in cocaine production.

In fact, the United Nations Drug Control Program (UNDCP) has described the Colombian military — which has been armed and trained for decades by the U.S. under the Clinton era policy known as “Plan Colombia” — as being among “the biggest heroin and cocaine trading institutions.”

The Colombian government has also been intimately involved, particularly during the presidency of Álvaro Uribe, who allegedly served as the “head of Colombia’s paramilitary groups” both before and while in office. Uribe was once ranked by the U.S. Defense Intelligence Agency “on a list of 104 important narco-traffickers contracted by the Colombian narcotics cartels.”

There are also indications of the U.S. government’s own involvement in the Colombian cocaine trade. For example, Colombia’s most notorious drug trafficker, Pablo Escobar, at one pointworked for the U.S. Central Intelligence Agency, according to Escobar’s own children. Escobar allegedly sold cocaine for the CIA to help the U.S. government finance its fight against communism and left-wing governments in Latin America.

As pointed out in the book Cocaine, Death Squads and the War on Terror: U.S. Imperialism and Class Struggle in Colombia, the U.S.’ anti-drug efforts in Colombia were never intended to eradicate cocaine, but instead alter the market share by ensuring that allies of the U.S. in Colombia – the Colombian government, paramilitaries and the wealthy elite who are favorable to U.S. business interests – could monopolize the drug trade with no competition from outsiders. Thus, it should hardly shock anyone that the U.S. continues to turn a blind eye to the country’s booming illegal drug trade and its associated violence, even as it continues to break records year after year.

Erasing the erasure of the Wayuú

As the long-standing, U.S.-backed plan to oust the Chavista regime in Venezuela has unfolded, Maduro’s government has been called out in Western media for “starving his own people,” despite the fact that U.S. sanctions imposed on Venezuela are a driving factor behind the country’s economic crisis. However, since 2011, Colombia has been the site of ongoing genocide against the country’s largest indigenous group – the Wayuú – in the country’s Guajira region, after the Colombian government diverted their only source of water to support the operations of the country’s – and continent’s – largest coal mine.

The suffering of the Wayuú, who have reported the deaths of at least 14,000 children due to the lack of clean water, has gone unreported by the same outlets that routinely raise concern about lack of essential goods in Venezuela. The Wayuú, who comprise around 20 percent of Colombia’s entire indigenous population and 48 percent of the Guajira region’s total inhabitants, are now on the brink of dying out completely seven years after the Ranchería river – their community’s only freshwater source – was diverted by the government-constructed Cercado dam in order to service the water needs of the Cerrejón coal mine.

An estimated 37,000 Wayuú now suffer from severe malnutrition, as they can no longer grow crops or raise livestock without a freshwater source. Each person in the community now lives off of less than 0.7 liters (24 oz.) of water a day while the Cerrejón mine guzzles more than 2.7 million liters of water in a 24-hour period – most of which is used to improve mine “visibility” by minimizing dust pollution. Despite the clear impact of the dam and mine on the humanitarian crisis facing the Wayuú, the Colombian government and supportive Western media have blamed “climate change” and weather patterns like El Niño for the situation.

The most likely reason for the erasure of the slow genocide of the Wayuú from Western media is the fact that the Cerrejón mine is largely a U.S.-backed operation, as the mine was originally founded by ExxonMobil and is now owned by a consortium of largely Western mining companies such as Anglo American and BHP Billiton. These same mining companies often work with right-wing paramilitary groups — who are also closely connected to the Colombian government — and who repeatedly threaten the lives of Wayuú who speak up about their people’s suffering, including their chief legal advocate, Javier Rojas Uriana.

Notably, the Colombian Wayuú have been immigrating to the Wayuú community in Venezuela in order to avoid the slow death caused by malnutrition, lack of water, and waterborne illnesses from the polluted water from the community’s remaining wells. The Venezuelan Wayuú have been largely supportive of Chavismo and have backed the Maduro-led government, referring to U.S.-backed opposition protests as violent riots “intended to create chaos.” The Huffington Post noted in 2017 that the Wayuú’s support for Maduro had largely been erased by the Western media because it “does not match up with the media’s anti-Venezuelan government narrative.”

While the fate of the Wayuú (and thus 20 percent of the country’s entire indigenous population) continues to hang in the balance, the plight of Colombia’s indigenous peoples has grown even worse since the recent inauguration of Colombian President Iván Duque.

Despite Duque’s having come to power just last August, El Tiempo recently reported that the murders of indigenous leaders in the country have spiked to levels unseen in over a decade since Duque became Colombia’s president. According to data cited by El Tiempo, 120 indigenous social leaders – as well as human-rights defenders — have been murdered in cold blood during Duque’s first 100 days in office.

Though the murder of social leaders by right-wing paramilitary groups has been a long standing problem in Colombia’s recent history, this level of targeted murder represents a spikeover recent years — in which 226, 159, and 97 such murders occurred over the course of the entire years of 2018, 2017 and 2016, respectively. Notably, the Venezuelan government of Nicolás Maduro has been routinely accused by Western media of murdering opposition activists; yet, those same outlets have been silent on Colombia’s recent spike in activist murders. Protesters attend a candlelight vigil for activists killed since the signing of the peace accords in Bogota, Colombia, July 6, 2018. Fernando Vergara | AP

Despite the jump, Duque’s government has expressed little concern. This is hardly surprising when one considers that Duque is the hand-picked successor and protégé of Álvaro Uribe, the former Colombian president who was once “the head of Colombia’s paramilitary groups,” according to former paramilitary group commanders of the right-wing death squad AUC, which has been funded by several prominent U.S. corporations.

Uribe, who was Colombia’s president from 2002 to 2010, and was a close ally of George W. Bush, was also personally implicated in organizing a massacre conducted by a right-wing paramilitary group; and his cousin, Colombian politician Mario Uribe, was charged with mobilizing right-wing death squads in the country to help secure Uribe’s presidential victory in 2002. Uribe’s brother was also arrested for founding a right-wing paramilitary group in 2016.

Under Uribe’s presidency, the Colombian military massacred thousands of civilians — such as in the “false positives” scandal, where the Colombian military dressed up an estimated 5,000 civilians in guerilla clothing and killed them in cold blood, subsequently gaining a bonus from Uribe’s government for the sinister act. It should be no surprise then that, under Uribe, the murder rate of indigenous leaders and human-rights activists reached its all-time high at 1,912 murders in 2003.

What to expect if US gets its way in Venezuela

If Washington’s publicly stated concerns about “human rights” and the welfare of a country’s people in Venezuela were genuine, it would be equally critical of Colombia’s government, given the numerous troubling situations currently unfolding in that country. Instead, the dichotomy between Washington’s relationship with Venezuela and Colombia is yet another clear example that the public justifications for the U.S.’s Latin America policy are little more than window dressing for the U.S.-backed expansion of neo-fascist governments throughout Latin America.

Indeed, if Juan Guaidó – the self-declared, U.S.-backed “president” of Venezuela – manages to seize power in the country, the current state of affairs in Colombia is a telling harbinger of what would likely manifest should Nicolás Maduro be overthrown and replaced with the same type of government that the U.S. has either backed or installed in several Latin American countries over the last few decades, and particularly in recent years.

0 thoughts on “As US Laments Human Rights in Venezuela, US-Allied Colombia Descends into Drug-fueled Humanitarian Crisis”