HOME / WORLD / The terrible forthcoming destruction of the «Caribbean Basin» 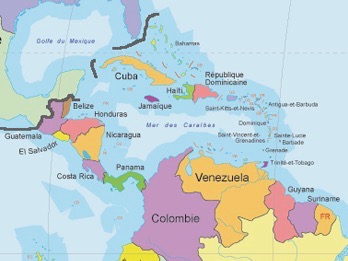 President Trump has announced the withdrawal of US combat troops from the « Greater Middle East », but the Pentagon is still pursuing the implementation of the Rumsfeld-Cebrowski plan. This time the aim is to destroy the States of the « Caribbean Basin ». This is nothing like the overthrow of pro-Soviet regimes, as in the 1970’s, but the destruction of all regional State structures, without consideration for friends or political enemies. Thierry Meyssan observes the preparations for this new series of wars.

In a series of previous articles, we presented the SouthCom plan to provoke wars between the Latin-American nations in order to destroy the structures of all the States in the « Caribbean Basin » [1].

Preparations for wars of this magnitude, intended to follow on from the conflicts in the « Greater Middle East » according to the Rumsfeld-Cebrowski strategy, requires a decade [2].

After the period of economic destabilisation [3] and that of military preparation, the actual operation should begin in the years to come by an attack on Venezuela by Brazil (supported by Israël), Colombia (an ally of the United States) and Guyana (in other words, the United Kingdom). It will be followed by others, beginning with Cuba and Nicaragua (the « troïka of tyranny » according to John Bolton).

However, the original plan may be modified, particularly because of the return of the imperial ambitions of the United Kingdom [4] which may influence the Pentagon.

This is where we are now :

The evolution of Venezuela

Venezuelan President Hugo Chávez had developed relations with the « Greater Middle East » on an ideological basis. He had in particular grown closer to Iranian President Mahmoud Ahmadinejad and Syrian President Bachar el-Assad. Together, they had imagined the possibility of founding an intergovernmental organisation, the « Free Allies Movement », on the model of the « Non-Aligned Movement », which was paralysed by the alignment with the United States, over time, of certain of its members [5].

Although Nicolas Maduro adopted the same language as Hugo Chávez, he chose a very different foreign policy. It is true that he continued the rapprochement with Russia and, in his turn welcomed Russian bombers to Venezuela. He signed a contract to import 600,000 tonnes of wheat in order to deal with starvation in his country. Above all, he prepared to receive six billion dollars of investments, including five in the oil sector. Russian engineers took over the posts which were intended for Venezuelan workers but which they had abandoned.

Nicolas Maduro reorganised the alliances of his country on new foundations. He wove close links with Turkey, which is a member of NATO and whose army presently occupies Northern Syria. Maduro went to Istanbul on four occasions and Erdoğan went once to Caracas.

Switzerland was an ally of Hugo Chávez, and had advised him for the composition of his Constitution. Fearing that he would be unable to refine his country’s gold in Switzerland, Nicolas Maduro looked to Turkey, which transformed the raw material into bullion. In the past, this gold had remained in Swiss banks as a guarantee for oil contracts. From now on, the liquid assets were transferred to Turkey, while the newly treated gold returned to Venezuela. This orientation may be interpreted as being no longer founded on ideology, but on interest. Everything depends on who benefits.

Simultaneously, Venezuela became the target of a destabilisation campaign which began with the guarimbasdemonstrations, continued with the attempted coup d’etat on 12 February 2015 (« Operation Jericho »), then by a series of attacks on the national currency, and organised emigration. In this context, Turkey offered Venezuela the possibility of avoiding US sanctions. The exchanges between the two countries multiplied fifteen-fold in 2018.

Whatever the evolution of the Venezuelan régime, nothing can justify what is being prepared against its population.

From 31 July to 12 August 2017, SouthCom organise a vast exercise with more than 3,000 men from 25 allied states, including France and the United Kingdom. The goal was to prepare a swift landing for troops in Venezuela [6].

Colombia is a state, but not a nation. Its population lives geographically separate according to social class, with enormous differences in the quality of life. Almost no Colombian has ever spent time in a neighbourhood attributed to another social class than their own. This strict separation has made possible the multiplication of paramilitary forces and consequently armed interior conflicts which have caused more than 220,000 victims in thirty years.

In power since August 2018, President Iván Duque has challenged the fragile peace concluded with the FARC by his predecessor, Juan Manuel Santos – but not with the ELN. He has not dismissed the option of a military intervention against Venezuela. According to Nicolas Maduro, the United States are currently training 734 mercenaries in a training camp situated in Tona with a view to carrying out a false flag operation intended to spark a war with Venezuela. Taking into account the sociological particularity of Colombia, it is impossible to determine with certainty whether or not the training camp is controlled by Bogota. 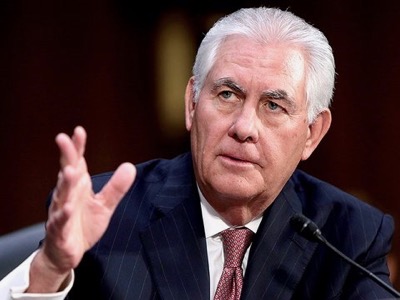 Rex Tillerson was the director of ExxonMobil at the moment of the discovery of oil deposits in Guyana. Shortly afterwards, he became the US Secretary of State.

In the 19th century, the colonial powers agreed to a frontier between British Guyana (presently Guyana) and Dutch Guyana (presently Surinam). but no text has ever defined the frontier between the British zone and the Spanish zone (presently Venezuela). Consequently, Guyana administrates 160,000 km2 of forest which is still a source of dispute with its larger neighbour. By virtue of the Geneva agreement of 17 February 1966, the two states deferred to the Secretary General of the UNO (at that time the Burmese U Thant). Nothing has changed since then – Guyana has proposed to bring the case before the UNO Permanent Court of Arbitration, while Venezuela prefers direct negotiations.

This territorial dispute does not seem particularly urgent, because the contested area is an uninhabited forest which was believed to be without value – however, it is a huge area which represents two thirds of Guyana. The Geneva agreement has been violated 15 times by Guyana, which specifically authorised the exploitation of a gold mine. Above all, the stakes were raised in 2015 with the discovery by ExxonMobil of oil deposits in the Atlantic Ocean, particularly in the territorial waters of the contested zone.

The population of Guyana is composed of 40 % Indians, 30 % Africans, 20 % mixed race and 10 % American Indians. The Indians are a strong presence in the civil services and the Africans in the army.

On 21 December, a vote of no confidence was lodged against the government of President David Granger, a pro-British, anti-Venezuelan General, in power since 2015. To everyone’s surprise, a deputy, Charrandas Persaud, voted against his own party, and in an atmosphere of indescribable chaos, provoked the fall of the government which had only a one-vote majority. Since then, the country is in a state of great instability – we do not know whether President Granger, who is presently undergoing chemotherapy, will be able to handle current affairs, while Charrandas Persaud left Parliament with an escort, via a back door, and has fled to Canada.

On 22 December 2018, in the absence of a government, the Ramform Tethys (under the flag of the Bahamas) and the Delta Monarch (Trinidad and Tobago) undertook submarine explorations in the contested zone on behalf of Exxon-Mobil. Considering that this intrusion violated the Geneva agreement, the Venezuelan army chased the two ships away. The Guyanese Minister for Foreign Affairs, working with current affairs, declared it a hostile act.

The United Kingdom Minister for Defense, Gavin Williamson, declared to the Sunday Telegraph on 30 December 2018 that the Crown was putting an end to decolonisation, which had been Whitehall’s doctrine since the Suez affair in 1956. London is preparing to open a new military base in the Caribbean (for the moment the UK has bases only in Gibraltar, Cyprus, Diego Garcia and on the Falkland islands). The new base could be situated on Montserrat (West Indies), or more probably in Guyana, and should be operational in 2022 [7].

Guyana is a neighbour of Surinam (Dutch Guyana). Its President, Desi Bouterse, is wanted in Europe for drug trafficking – an affair which pre-dated his election. But his son, Dino, was arrested in Panama in 2013, despite the fact that he entered that country under a diplomatic passport. He was extradited to the United States where he was sentenced to 16 years of prison for drug trafficking – in reality because he was setting up the Lebanese Hezbollah in Surinam. 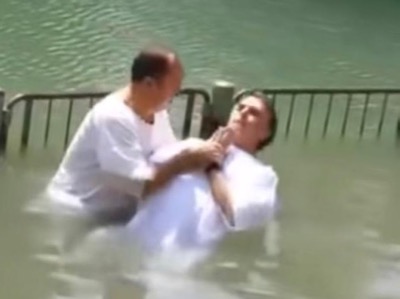 In May 2016, Henrique Meirelles, the Minister of Finance for the transitional government of Libano-Brazilian Michel Temer, nominated Israelo-Brazilian Ilan Goldfajn as director of the Central Bank. Mereilles had also presided the Committee for the preparation of the Olympic Games, calling on Tsahal to coordinate the Brazilian army and police, thus guaranteeing the security of the Games. Simultaneously controlling the Central Bank, the army and the police of Brazil, Israël had no difficulty in supporting the popular movement of dissatisfaction in the face of the incompetence of the Workers’ Party.

Believing – without any solid proof – that Presidente Dilma Rousseff had fudged the public accounts in the context of the Petrobras scandal, the parliamentarians impeached her in August 2016. 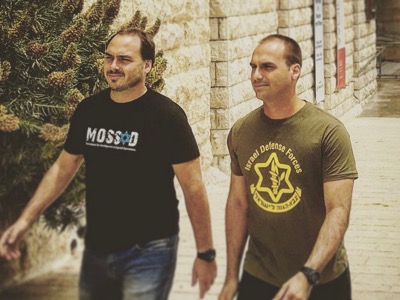 Eduardo and Carlos, the sons of President Jair Bolsonaro.

During the Presidential election of 2018, candidate Jair Bolsonaro went to Israël to be baptised in the waters of the Jordan, and consequently obtained a massive percentage of the evangelical vote. He was elected with General Hamilton Mourão as his Vice-President. During the period of transition, Mourão declared that Brazil should prepare to send men to Venezuela as a « peace force » once President Maduro had been overthrown – comments which constitute a barely-disguised threat which President Bolsonaro attempted to downplay.

In an interview on 3 January 2019, on the TV channel SBT, President Bolsonaro spoke of negotiations with the Pentagon concerning the possibility of creating a US military base in Brazil. This declaration raised powerful opposition within the armed forces, for whom their country is capable of defending itself without assistance. 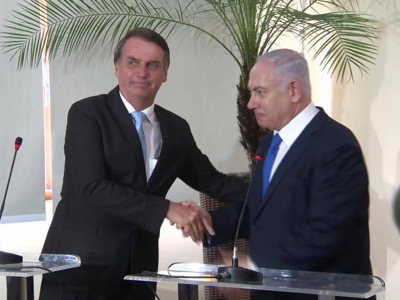 Benjamin Netanyahu during the investiture of President Bolsonaro. Israël has taken position in Brazil.

During his investiture on 2 January 2019, the new President welcomed Israëli Prime Minister Benjamin Netanyahu. This was the first time that an Israëli personality of this importance had been to Brazil. On this occasion, President Bolsonaro announced the coming transfer of the Brazilian embassy from Tel-Aviv to Jerusalem.

US Secretary of State Mike Pompeo, who also went to the investiture, where he met Peruvian Minister for Foreign Affairs Néstor Popolizio, announced with President Bolsonaro his intention to fight with him against the « authoritarian régimes » of Venezuela and Cuba. Returning to the United States, he stopped over in Bogota to meet with Colombian President Iván Duque. The two men agreed to work for the diplomatic isolation of Venezuela. On 4 January 2019, the 14 States of the Lima Group (including Brazil, Colombia and Guyana) met to agree that Nicolas Maduro’s new mandate, which begins on 10 January, is « illegitimate » [8]. This communiqué has not been signed by Mexico. Apart from this, six of the member-States lodged a complaint with the International Criminal Tribunal against President Nicolas Maduro for crimes against humanity.

It is perfectly clear today that the process towards war is under way. Enormous forces are in play, and there is little that can be done to stop them now. It is in this context that Russia is studying the possibility of setting up a permanent aero-naval base in Venezuela. The island of La Orchila – where President Hugo Chávez was held prisoner during the coup d’etat of April 2002 – would enable the storing of strategic bombers. This would constitute a much greater threat to the United States than the Soviet missiles stationed in Cuba in 1962.

0 thoughts on “The terrible forthcoming destruction of the «Caribbean Basin»”