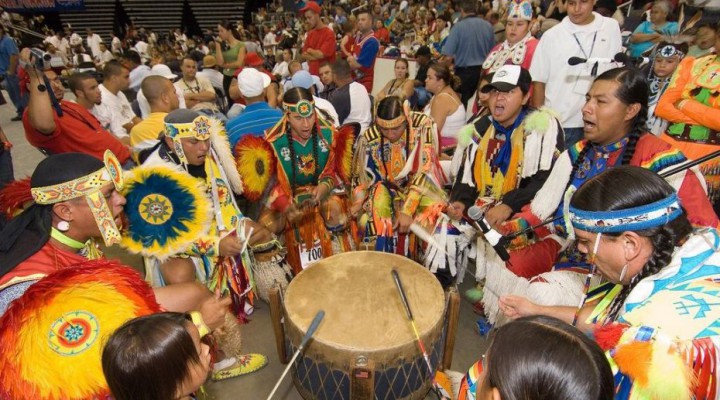 Never in recent times have the 370 million indigenous peoples who have no states of their own – been under assault, as it is now, Wayne Madsen writes.

Never in recent times has the Fourth World – the 370 million indigenous peoples who have no states of their own – been under assault, as it is now, from a combination of proto-fascist governments and resource-grabbing corporations. The basic tenets of the 2007 United Nations Declaration on the Rights of Indigenous Peoples (UNDRIP) are being undermined by governments that are serving the interests of mining and drilling companies eager to displace indigenous peoples from their natural resources, much of which are found on sacred ancestral lands.

In 2016, Bears Ears National Monument in Utah and Grand Staircase-Escalante National Monument were designated protected areas under the Antiquities Act. On December 4, 2017, Donald Trump ordered a large portion of the monuments seized and turned over to uranium and other mining companies in violation of the US Constitution and international treaties signed between the US government and the five native tribes – Hopi Nation, Navajo Nation, Ute Indian Tribe, Ute Mountain Ute Tribe, and Zuni Pueblo Nation – that consider the monument areas as sacred and inviolable by miners, drillers, and other despoilers of the land.

Mr. Trump has opposed the sovereign immunity of the Native American tribes ever since the advent of casino gambling on tribal reservations. Trump, fearful of competition for his three Mafia-infused casinos in Atlantic City, New Jersey, did what he always does – project his worst traits on to others. In the late 1990s, using a fake “pro-family” front group, the “New York Institute for Law and Society,” Trump accused the St. Regis Mohawk tribe, which planned to open a casino in the New York Catskills, of being violent criminals and drug dealers. Running the dirty tricks campaign against the Mohawk tribe was Trump’s longtime dark propagandist, Roger Stone. Stone commissioned media advertisements that falsely accused the Mohawk Nation, which sits astride the US-Canadian border, of smuggling liquor and cigarettes and dealing with mobsters. Stone is currently and unsurprisingly under investigation by the Department of Justice’s special counsel, Robert Mueller, for 2016 political campaign and criminal conspiracy violations.

Trump’s demonization of Native Americans does not stop with ancestral lands and “Indian gaming.” Trump – who racially slurs US Senator Elizabeth Warren of Massachusetts by calling her “Pocahontas” – and his supporters’ constant criticism of political refugees seeking asylum from violence in their native Guatemala omits any knowledge of who they are and why they want to live in safety in the United States. The US Department of Homeland Security (DHS) and its Immigration and Customs Enforcement (ICE) agents are so ignorant about the human rights situation in Central America, they employ Spanish-speakers to deal with the asylum seekers. Yet, these unfortunate souls speak neither Spanish nor English. Many of them only speak Ixil, a Mayan language. Others speak different Mayan languages – K’iche’, Q’eqchi, Achi, Xinca, Mam, Kaqchekel, Yucatec Maya, Awakatek, Akateko, Jakaltek, and Q’anjob’al, among others – for which there are few interpreters in government or even academia.

Without adequate language skills, US immigration agents and judges are unable to communicate with the asylum seekers.

Homeland Security Secretary Kirstjen Nielsen showed her total ignorance about the refugee situation at the border by stating at a White House briefing, “All US Border Patrol personnel in the Southwest border are bilingual — every last one of them.” What Nielsen failed to mention, either by design or because she is inept at her job, is that personnel bilingual in English and Spanish are not what is required at the border to deal with asylum seekers.

Why the Mayan people risk such a long journey to the US southern border requires a quick course in US policy in Central America over several decades. For years, US military and intelligence instructors, including those at the infamous “School of the Americas,” where America trains future Latin American dictators, have commanded national military and local paramilitary forces intent on committing genocide against the Mayans and other Native American peoples. And, as a willing accomplice to the slaughter of the descendants of the original peoples of Central America, the Israeli state and its military-intelligence contractors have provided the governments of Guatemala, Honduras, and El Salvador with the technical ability to track and hunt down, like prey, indigenous peoples to carry out a genocide that would have been the envy of Heinrich Himmler and Arthur Seyss-Inquart.

Trump’s policy of separating Mayan and other families at the border is a direct violation of UNDRIP, which guarantees that Indigenous people, whether or not they are refugees, have an inherent right to remain in their family unit. Native American tribes, which have already endured the racist policies of the Trump administration, stood with their brethren from south of the US border. Leaders of the Cherokee Nation, Cheyenne River Sioux Tribe, the Kiowa Tribe, the Blackfeet Nation, the Chickasaw Nation, and Lakota Sioux Nation condemned the policy of separating children from their parents. For many Native Americans, the scene of families being ripped apart was reminiscent of the one-time US government policy of seizing Native American children from their parents and shipping them off to Indian boarding schools and foster care by white European households.

Guatemala’s treatment of its Mayan population is linked to the Christian “evangelism” of its comedian-turned-politician president, Jimmy Morales, a Baptist seminary graduate who once amused his audiences by appearing in “black face.” Not only was this an affront to Afro-Central Americans of the region, but also to Guatemala’s darker-skinned Mayans. In return for Morales recognizing Jerusalem as Israel’s capital and moving Guatemala’s embassy from Tel Aviv to Jerusalem, Israel has bestowed weapons, ammunition, population tracking software, drones, and other surveillance technology to the Morales government in order to keep the Mayan minority in check.

In 2013, former Guatemalan president, retired General Efraín Ríos Montt, was found guilty by a Guatemalan court of genocide and crimes against humanity. For two years, from 1982 to 1983, Ríos Montt’s army killed entire families and wiped out their villages. Some 5.5 percent of the Ixil Mayans were killed, alone. This genocide was carried out with the assistance of the US Central Intelligence Agency, US Special Forces, and Israel’s Mossad.

Ironically, while fleeing the evangelical “piety” of thugs like Morales and Guatemala’s US-trained military officers, many of the country’s refugee indigenous children – separated at the US border by the Trump administration – have ended up in the care of dubious evangelical Christian organizations, some with sordid histories of child sex and physical abuse.

Christian piety was not on the mind of another American evangelical interloper, missionary John Chau, who attempted to land on the protected North Sentinel Island in the Indian-controlled Andaman and Nicobar Islands to “convert” virtual stone age tribal people to Christianity. The North Sentinelese are known to be hostile toward outsiders and often throw spears and fire arrows at interlopers and trespassers. Rather than welcome Chau, who was representing an evangelical outfit in Kansas City called “All Nations,” the North Sentinelese made an example out the unwanted stranger by, reportedly, killing him. Little did the island tribe know, but Chau may have been carrying germs for which the isolated islanders have no bio-immunity defenses.

There is a belief that the North Sentinelese have another reason to drive off strangers. During World War II, the imperial and very racist Japanese armed forces occupied the Andamans and Nicobars for use as naval bases. The Japanese may have landed on North Sentinel and killed off many tribespeople before the survivors escaped into more remote parts of the island.

If this is true, the North Sentinelese, if they were able to comprehend the recent action of Indian Prime Minister Narendra Modi, would be extremely upset. Modi recently demonstrated his fealty to Indian nationalist leader Netaji Subhash Chandra Bose, who was allied with Imperial Japan and Nazi Germany during World War II. Modi’s renamed three of the islands in the Andaman Islands – Ross Island, Neil Island and Havelock Island – as Netaji Subhash Chandra Bose Island, Shahid Dweep, and Swaraj Dweep, respectively, in honor of Bose. Ruling over the Japanese puppet state, the “Provisional Government of Free India,” based in the Japanese-occupied Andamans and Nicobars, Bose would also lead, under the command of the Nazi Waffen SS, the Indian Legion – later the “Azad Hind Legion” – which saw action against the Soviet Union.

The North Sentinelese, without even knowing it, have as much to fear from Modi’s proto-fascist Hindu nationalists as they do from interloping evangelical missionaries from the US Midwest. With people like Trump and his evangelical allies – some of whom called for US military action against the spear-throwing and arrow-shooting North Sentinelese to recover Chau or his body – Modi, and the anti-indigenous new president of Brazil, Jair Bolsonaro, the Fourth World is under an existential siege unseen in recent times.