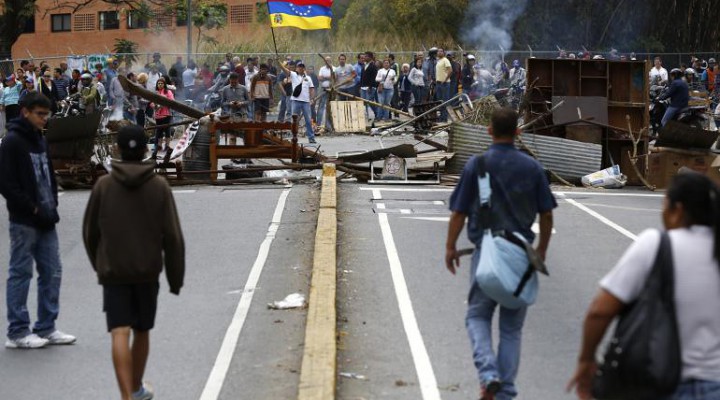 There is a familiar smell about what is taking place vis-à-vis Venezuela. The official US government line is that the sanctions against the country and the decision to recognize the head of its national assembly Jose Guaido as interim president is based on a flawed election won by populist Nicholas Maduro last May. Guaido was reportedly promised US support for his soft coup by no less than Vice President Mike Pence in a phone call the night before he declared himself acting president while the American State Department is oddly proclaiming that it is intervening to support the Venezuelan constitution. Unfortunately for that argument, a quick perusal of the document itself does not seem to reveal an article empowering the United States to appoint the Venezuelan president.

Indeed, politics in Venezuela have long been particularly incendiary. There may or may not have been electoral fraud, regarding which little in the way of actual evidence has been presented, but the entire affair smacks of a pretext to initiate regime change in Caracas, an objective of the United States government ever since Maduro’s predecessor Hugo Chavez was elected president in 1998.

The thuggish Chavez, a populist who set out with an agenda to dismantle the oligarchy that had been running Venezuela for decades, certainly wound up doing extreme damage to the country’s economy while also further polarizing the existing class and political divisions. Corrupt and venal, he was emphatically not a modern Simon Bolivar, the “Libertador” that he sought to model himself on, but his views might conceivably have moderated if he had not been subjected to relentless US pressure from the git-go, to include a successful coup that ousted him briefly in 2002. Chavez’s successor Maduro has been embroiled in a worsening crisis that his policies have exacerbated, with food shortages, massive unemployment, hyperinflation, political rioting and a regional refugee problem caused by the departure of possibly as many as three million Venezuelans.

One might observe that if supporting foreign constitutions against electoral fraud were actually a vital interest for the US Washington would be intervening in more than 100 countries. In this case, the Trump Administration is also declaring that it is intervening to restore democracy and liberate the Venezuelan people, but the reality on the ground is quite different. As the sanctions do not hurt the rulers of the country, nor the military which benefits greatly financially from the status quo and supports the leadership, all that occurs is the infliction of more pain on the ordinary people, who have no say in what occurs. It is similar to what is taking place vis-à-vis Iran. The expectation of ideologues like John Bolton and Mike Pompeo is that the people in both Iran and Venezuela will eventually rise up in revolt and depose their governments, replacing them with something more acceptable to the United States.

Ron Paul has observed that there is a certain irony that a White House which has for two years been “fighting charges that a foreign country meddled in the US elections would turn around and not only meddle in foreign elections but actually demand the right to name a foreign country’s president!” Dr. Paul also notes Trump’s appointment of “a convicted criminal Elliot Abrams as his point person to ‘restore democracy’ in Venezuela,” observing that “Abrams played a key role in the Iran-Contra affair and went on to be one of the chief architects of the disastrous US invasion of Iraq in 2003. His role in helping promote the horrible violence in Latin America in the 1980s should disqualify him from ever holding public office again.”

The argument that Washington is responding appropriately to the current developments in Venezuela is deeply flawed, in part because President Donald Trump has several times raised the issue of possible military intervention even before last May’s national election. Another more recent report linked to John Bolton suggests that there is a plan for dealing with Venezuela that appears to include the insertion of 5,000 US troops.

Attacks on Venezuela’s government and leader were common both under George W. Bush and Barack Obama and it is plausible to suggest that the CIA has been active engaged in subverting the country’s government for the past twenty years. Mike Pompeo, when still head of the Agency, spoke at an Aspen Institute security conference in July 2017, saying that he was “hopeful that there can be a transition in Venezuela and we the CIA is [sic] doing its best to understand the dynamic there.” Pompeo also said that Mexico and Colombia were also discussing with him options for “change” for Venezuela.

Pompeo’s comment was particularly interesting as CIA is not exactly an organization that seeks to “understand…dynamics.” One should assume that the CIA Station in Caracas is possibly half of the remaining forty or so diplomats and other officers assigned to the post. They would have been spending their time funding the opposition to Chavez and then Maduro, recruiting officers in the army and other security forces to make them coup-able, and paying journalists and other opinion makers both in Venezuela and in neighboring countries to write articles attacking the country’s regime. If Venezuela is experiencing a crisis, it is at least in part attributable to American covert action.

If the United States persists in a new dose of “regime change” in Latin America and gets away with it, advisers like Bolton and Pompeo will be empowered and will demand more of the same. In his UN speech earlier this week Pompeo warned that “…now it’s time for every other nation to pick a side. No more delays, no more games. Either you stand with the forces of freedom or you’re in league with Maduro and his mayhem.” It all sounds a bit like George W. Bush in 2001, and “success” as seen from the White House perspective could mean a reversal of the withdrawal from Syria and even more pressure on Iran, to name only two “hot spots.” That an American administration will once again see itself on steroids, as a global arbiter, the “leader of the free world,” is the real danger that comes with what is going on in Venezuela.

0 thoughts on “Venezuela in Flames. Washington Is Working Hard for Regime Change”