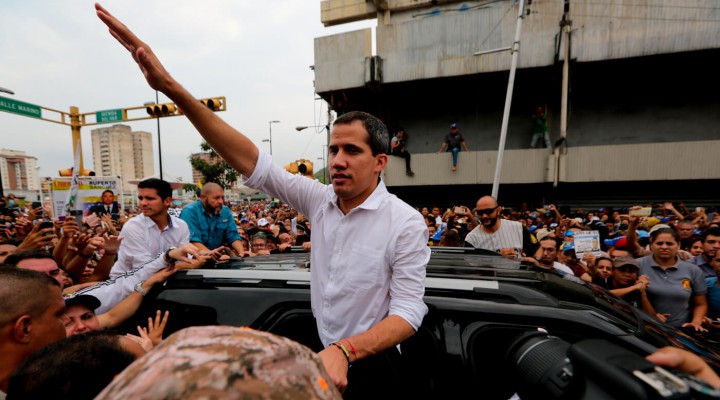 MPN- With Guaidó rapidly losing momentum and credibility after Tuesday’s failed coup, López and his U.S. backers may turn on their own if they think it will benefit or energize their cause or if it could be used to set the stage for foreign military intervention.

Prominent American anti-war figures from across the ideological spectrum are warning that the Trump administration may soon turn on Juan Guaidó — the man they recognize as Venezuela’s interim president — in order to justify military intervention in Venezuela.

These warnings followed Guaidó’s failed attempt to lead a military uprising on Tuesday, which analysts characterized as a desperate move, with Guaidó’s parallel government having failed to gain any significant traction in Venezuela since late January. With Guaidó now quickly losing legitimacy and momentum since Tuesday’s failed coup, it has become increasingly probable that his political patrons — the United States — may soon turn on him, as any harm done to him could be blamed on Venezuelan president Nicolás Maduro, which would allow the U.S. government to justify aggressive action against the Maduro-led government.

One of the first prominent anti-war voices to raise concern that the U.S. government, particularly the CIA, may now see Guaidó as more valuable dead than alive was Daniel McAdams, executive director of the Ron Paul Institute for Peace and Prosperity and co-host of the Ron Paul Liberty Report, with the former congressman, presidential candidate and well-known libertarian. During Tuesday’s edition of the Liberty Report, Paul raised concern that a provocation could be used to push for foreign (i.e., U.S.) military intervention in Venezuela:

The big danger is a hard war breaking out. I’d still bet it won’t be too bad, with thousands of troops moving. But it could be a guerrilla war or something like that. If there is a false flag or some important official on either side gets killed, you can’t tell what might happen.”

McAdams responded, pointing out that Guaidó himself could soon become such a target for a provocation:

He [Guaidó] has been a kind of a hapless figure so far. He calls for mass protests and no one shows up. I don’t think he realizes right now that he is actually now worth more dead than alive not only to the CIA, but also to his own opposition people. A shot in the crowd or something like that to takeGuaidó out. It might shock you, Dr. Paul, but the CIA is pretty good at this kind of things.”

Concerns about Guaidó being targeted by the U.S. in order to blame it on the Venezuelan government and justify intervention were also raised on Wednesday by Ajamu Baraka, former vice presidential candidate for the Green Party and national organizer for Black Alliance for Peace. Baraka took to Twitter, stating:

Watch out for a false-flag operation in Venezuela with a hit on Guaidó, whose value to CIA & U.S. state is fading by the minute now. With the release of Leopoldo Lopez (by unknown forces) the U.S. now has access to someone who is even more vicious and opportunist than Guaidó.”

As MintPress has previously reported, Leopoldo López was lauded in a leaked U.S. government cable citing “his enduring popularity, charisma and talent as an organizer” within the U.S.-backed Venezuelan opposition. These characteristics are something that Guaidó is increasingly losing as his parallel government continues to fail to gain traction within Venezuela.

Watch out for a false-flag operation in Venezuela with a hit on Guaido who’s value to CIA & U.S. state is fading by the minute now. With the release of Leopoldo Lopez ( by unknown forces) the U.S. now has access to someone who is even more vicious and opportunist than Guaido.

938 people are talking about this

However, with López now hiding out in Spain’s Caracas embassy and a new warrant recently issued for his arrest by Venezuelan authorities, López’s ability to organize is limited, just as it was while he was under house arrest. López was originally placed under arrest in 2014 for his role in inciting violent protests that resulted in over 40 deaths and was moved from prison to house arrest in 2017. However, from the Spanish Embassy, López is better equipped to coordinate with the U.S. government —his greatest political patron — and to direct Guaidó, his political protege whose recent rise to power he directly oversaw.

With López still unable to directly maneuver in the streets, Guaidó’s continued freedom of movement may continue to make him a valuable asset to the current efforts to overthrow Venezuela’s Chavista-led government. However, with Guaidó rapidly losing momentum and credibility after Tuesday’s failed coup, López and his U.S. backers may turn on their own if they think it will benefit or energize their cause or if it could be used to set the stage for foreign military intervention.

Though it may seem extreme, the U.S. — and the CIA in particular — have turned on their assets in Latin America before, with former Panamanian dictator and long-time CIA asset Manuel Noriega being as good an example as any. Furthermore, the U.S. has often been led into wars by “false flag” provocations, such as the now infamous Gulf of Tonkin incident, which led to increased U.S. intervention in Vietnam. The CIA, together with the Pentagon, even made plans in the 1960s to conduct terror attacks on U.S. soil in order to justify military action against Cuba, showing that U.S. intelligence has even been willing to kill American citizens to justify military intervention abroad. There are numerous precedents from the CIA’s past that show that a plan that would see Guaidó become some sort of “false flag” martyr is hardly a far-fetched scenario.

In Guaidó’s case, National Security Adviser John Bolton — known for his marked tendency to favor military action over diplomacy — previously stated that Guaidó’s “safety must be guaranteed” and that “any threats or acts against his safe return will be met with a strong and significant response from the United States and the international community.”

Venezuelan Interim President Juan Guaido has announced his planned return to Venezuela. Any threats or acts against his safe return will be met with a strong and significant response from the United States and the international community.

18.7K people are talking about this

President Guaido safely returned to Venezuela today to continue his strong push for a democratic future for the people of his country. The United States fully supports Guaido and the National Assembly. His safety must be guaranteed. The world is watching. 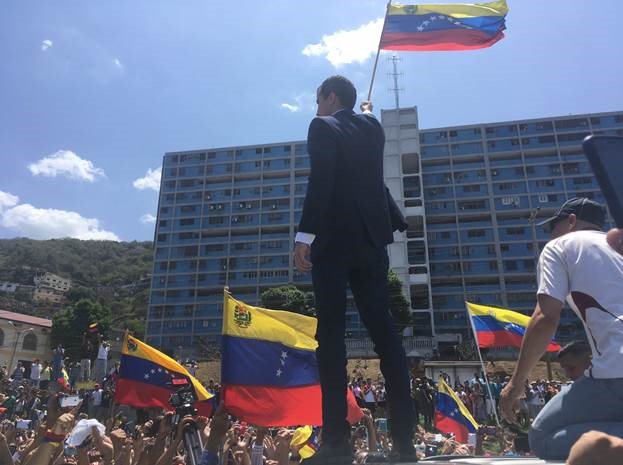 8,642 people are talking about this

Though reports have characterized President Trump as uninterested in a long-term military conflict (likely owing to concern it could harm his re-election prospects), Trump has also “given Bolton wide purview over Venezuela.” In recent months, Bolton has been pushing a reluctant Pentagon to draft war plans for Venezuela.

According to a recent report in the Washington Post:

As he has pushed for a more aggressive policy, Bolton has angered some within and outside the White House. Even before Tuesday’s events, his staff clashed with Gen. Paul Selva, [Pentagon Chief of Staff Gen. Joseph] Dunford’s vice chairman, during a meeting to address the ongoing Venezuelan crisis, according to several officials with knowledge of the exchange.

The soft-spoken Air Force general was giving an update last week on the Pentagon’s view and making the case against a risky escalation by the United States when Bolton aides, including Mauricio Claver-Carone, Western Hemisphere director at the National Security Council, repeatedly interrupted and asked for military options, according to the officials.”

The report then added:

A senior administration official said Bolton’s staff was dissatisfied with Selva, who they felt had not presented sufficient military options for Venezuela as expected. Selva, according to people familiar with the interaction, believed the confrontational style of Bolton’s staff was out of line.”

A separate report in the New Yorker also noted that Bolton would have “extraordinary latitude” in the event of a crisis or conflict, given that Trump’s national security team currently lacks a permanent secretary of defense, a secretary of homeland security, and an ambassador to the United Nations.

The president has been crystal clear and incredibly consistent – military action is possible. If that’s what’s required, that’s what the United States will do.”

Bolton, for his part, characterized Tuesday’s failed coup as the “last chance” for top Venezuelan military officials to support the U.S.-backed parallel government led by Guaidó. Acting Secretary of Defense Patrick Shanahan also stated on Wednesday that “all options,” including military options, were being considered for Venezuela.

If a point arises in the not-so-distant future where Guaidó’s lack of popularity and legitimacy conflict with U.S. plans for Venezuela, it seems increasingly likely that those in the U.S. pushing for war may see Guaidó as more useful to their intervention plans dead than alive.