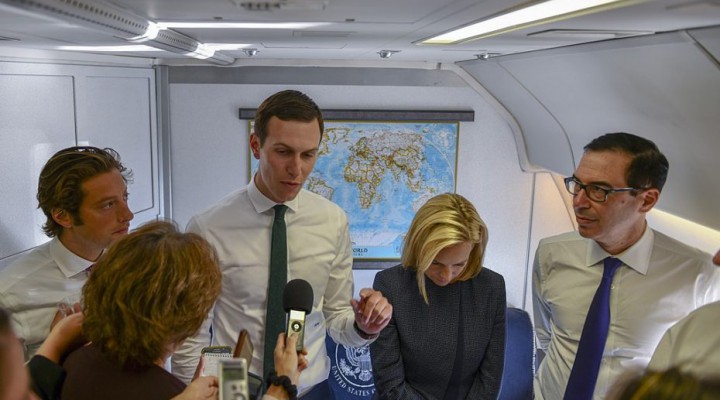 Kushner never invited the people most impacted by his “dead-on-arrival” plan – the Palestinian people – to the negotiating table, Wayne Madsen writes.

There was never much doubt that Donald Trump’s son-in-law, Jared Kushner, was going to roll out as his much-ballyhooed “Middle East Peace Plan” an 80-page contrivance that would hand large portions of the West Bank to the Israelis and relegate the Palestinians to a powerless “state” composed of enclaves totally surrounded by heavily-militarized Israeli territory. Kushner, who claimed he became a Middle East expert after reading twenty-five books since his pro-Israel father-in-law named him America’s Middle East peace agreement special “envoy” three years ago, never invited the people most impacted by his “dead-on-arrival” plan – the Palestinian people – to the negotiating table.

Neither Kushner nor Trump felt it was necessary to have invited Palestinians to the January 28, 2020 White House ceremony unveiling the “peace plan.” Only Israeli Prime Minister Binyamin Netanyahu, who has been criminally charged in Israel for bribery, fraud, and breach of trust, was invited to the White House ceremony. Netanyahu is so close to the Kushner family that he once slept in Jared Kushner’s bed when visiting the Kushner family in New Jersey.

Also present at the White House ceremony was major Trump campaign donor and casino magnate Sheldon Adelson, an individual whose hatred for the Palestinians knows no bounds. Another key player in Trump’s lavish giveaway of the West Bank to the Israelis is David Friedman, Trump’s one-time bankruptcy lawyer and his ambassador to Israel. Friedman is on record advocating Israel’s annexation of the West Bank, which he and other expansionists call “Judea and Samaria,” place names drawn from a set of Biblical books of Hebrew mythology and folklore. Yet Kushner referred to previous serious Middle East peace plans, including the 1991 Madrid Conference and 1993 Oslo Accords as “fairy tales” and “tired old ideas.” In fact, ancient texts justifying slavery, misogyny, and fratricide – otherwise known as the Old Testament – represents true fairy tales and tired old ideas having no place in the 21st century.

Jared Kushner’s ex-federal convict father, Charles Kushner, has been a lifelong friend of Netanyahu and a key officer in Israel’s political influence machine in the United States. It was therefore not surprising that Jared Kushner’s plan advocates a Palestinian non-contiguous entity on the West Bank subservient to Israel and connected to the open-air ghetto of Gaza by an underground tunnel. It was Adolf Hitler’s National Socialist dogma to equate Jews to rats and mice. Apparently, some of those, like Kushner and Netanyahu, who bemoan the loss of members of their families during the Holocaust, would relegate the Palestinians to human rodents scurrying underground beneath the ground between Gaza and the West Bank “reservations” allotted to the Palestinians.

Israel would annex a third of Palestinian territory, including the entire Jordan River valley, cutting Palestinian enclaves off from a common border with Jordan. The Kushner plan also deprived the Palestinians of a capital city in East Jerusalem. Kushner proposes the Palestinian capital be located in some slums in an eastern suburb of Jerusalem.

The only Arab ambassadors to Washington who were present at Kushner’s West Bank annexation plan for Israel were those from Bahrain – a virtual Saudi Arabian puppet state, Oman – which is still trying to get its diplomatic footing after the death of its leader, Sultan Qabus bin Said, and the United Arab Emirates, which an increasingly doddering Trump referred to in his remarks as the “United Arab Air Mattress.”

The Egyptian Secretary General of the Arab League, Ahmed Aboul Gheit, in condemning Kushner’s contrivance, said it would establish an “apartheid” system and relegate Palestinians to the status of second-class citizens. The Kushner plan came as yet another slap in the face of the Palestinians and Arab countries. Trump recognized Israeli sovereignty over Jerusalem and moved the US embassy there from Tel Aviv. Trump then formally recognized Israel’s illegal annexation of Syria’s Golan Heights. Trump further poisoned the water by closing down and expelling the Palestinian diplomatic mission in Washington and halting all US assistance to the United Nations relief agency for Palestine, UNRWA.

Kushner’s hatred for the Palestinian people was on full display in an interview with CNN. He claimed that the Palestinians were “going to screw up another opportunity like they’ve screwed up every opportunity that they’ve ever had in their existence.” Borrowing a page from his father-in-law’s insult manual, Kushner said of Palestinian chief negotiator Saeb Erekat: “In my business, when someone tries to do business for 20 years [a reference to Erekat] and fails, he is replaced by someone else.” Kushner’s main “business” has been as an apartment slum lord, relegating his renters in Maryland, New Jersey, and New York to lives of malfunctioning heating and air conditioning systems, rodents and insects, usurious rent hikes, and broken appliances. Kushner, an Orthodox Jew and supporter of the Zionist Chabad Lubavitch movement, apparently has the same slumlord vision in store for the 4.68 million people of the West Bank and Gaza.

Kushner appended his sales pitch to the Palestinians by further insulting them. He said “his vision was 100 percent workable if only the Palestinian leadership would stop being so “hysterical and stupid.” Kushner also said that “Palestinians have never done anything right in their sad, pathetic lives.” Kushner’s statements are those of a Zionist Jewish racist, pure and simple. Unfortunately, few Jewish organizations have been willing to condemn such blatantly racist and xenophobic statements from Mr. Trump’s son-in-law. Kushner is an important cog in a neo-fascist political machine that relegates those of African, Arab, or other nonwhite European heritage to second-class “untermensch” – a favorite term of the Nazis – status.

In a response to Kushner’s “deal of the century” and insulting comments, Erekat tweeted: “If Mr. Kushner says PM Netanyahu is allowed to annex Jerusalem, settlements, Jordan Valley, Dead Sea, have security control west of the Jordan river, control Palestinian airspace, territorial waters, no [harbors], refugees off the table. What is [there] to negotiate?” Indeed, why even invite the Palestinians to the negotiating table. Hitler never invited the Czechoslovakians to the Munich peace conference eve though he and Benito Mussolini, with the acquiescence of the British and French were carving up Czechoslovakia for Hitler’s annexation. Kushner and the Israelis have learned well from the architects of the Holocaust.

‘Hysterical and Stupid’: Kushner Reveals His Attitude Towards the Palestinians