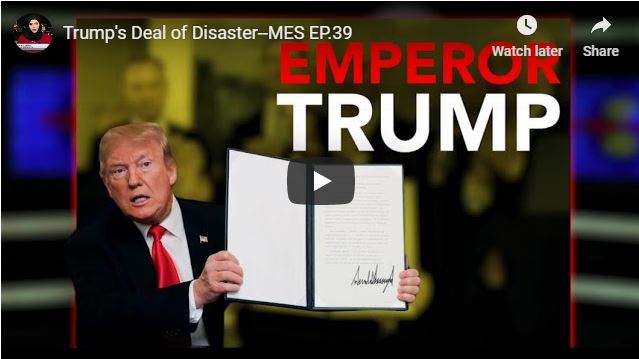 The so-called “Vision for Peace” unveiled last week in Washington simply confirmed that the US government has publicly adopted the long-running consensus in Israel; that it is entitled to keep permanently the swaths of territory it seized illegally over the past half-century that deny the Palestinians any hope of a state. We discuss this segment with Shabbir Hasan Ali, political commentator.

Trump’s so-called “Peace” plan is labeled ‘The Deal of the Century’ because according to Trump’s logic it is supposed to offer an even-handed and just solution to one of the world’s most intractable conflicts. Instead, it does something very different. The ‘Deal of the Century’ resurrects and restores grand apartheid, a racist political system that should have been left in the dustbins of history. We discuss this segment with Abbas Hamideh, founder and executive director of AlWadah, Palestinian Right of Return movement.

Trump’s ‘Deal of the Century’ is an ‘offer they can’t refuse’, and that’s why it will likely work