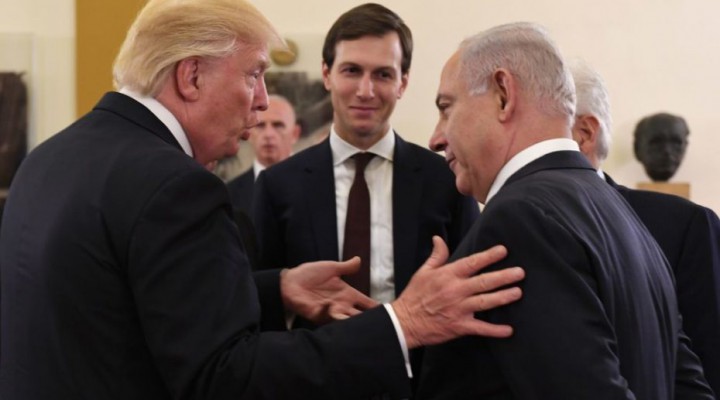 The Kushner – Trump ‘Deal’, in respect to the integration of Israel into the regional energy economy seems destined to draw the same skepticism and distrust, as does the ‘Deal’s’ other parts.

It is nothing new to say that the ‘Deal of the Century’ is – and always was – in essence an economic project. Indeed, it seems that its political ramifications are viewed by the White House as little more than the ineluctable consequences to an a priori economic architecture, already in the process of being unfolded.

In other words, it is the economic facts on the ground that are intended shape the political outcome — an attenuated political landscape that anyway has been minimised by Trump’s pre-emptive removal of key pieces of any Palestinian negotiating leverage.

The financial squeeze on the Palestinians is well attested. On the one hand, the Palestinian Authority (historically dependent on Saudi subvention) is gently slipping into bankruptcy; whilst Gaza is held in virtual abject dependency through the drip-feed of subventions channelled into Gaza by Qatar, with Israeli permission — the size of this latter monthly ‘lifeline’ subvention being carefully adjusted by Israel according to what it judges to be the norms of (generally Hamas) ‘good conduct’.

So, on the one hand there is the financial siege that is intended to make the Palestinians pliant to the ‘quality of life package’ which the ‘deal’ is supposed to bring — the Bahrain summit later this month being its shopfront. But there is another less well recognised side to the Deal which is summarised in the title to a McClatchy article entitled, White House sees Egyptian energy forum as a ‘roadmap to Middle East peace’.

In a later piece, McClatchy publishes the newly declassified map of the US East Mediterranean energy ‘roadmap’. And here the fuller picture becomes clear: the US sponsored ‘gas forum’, “according to three senior administration officials, that map [the] declassified one, obtained by McClatchy – has motivated members of the [US] National Security Council to prioritize the formation of a gas forum in the Eastern Mediterranean that would simultaneously boost and entangle the economies of several countries that have been at odds for decades”.

Well, let’s translate that little euphemism: ‘boost and entangle’. What that formula translates into is — the means to integrate Israel into the economic regional sphere is firstly, through energy. Yet, it is not intended to integrate Israel alone into this Egyptian economic sphere, but also to make Jordan, the PA (and maybe even Lebanon), too, partially dependent on Israeli energy – alongside putative partners, Italy, Greece, and (the Greek-linked part) of Cyprus — with the US offering to help flesh out the structure of the ‘gas forum’ with U.S. expertise.

This is the heart of ‘the deal’. Not just political normalisation for Israel into the region, but the making of economic dependency of the Egyptians, Palestinians, Jordanians (and possibly – but not so likely – Lebanon) on the US East-Med gas ‘hub’. And, inevitably there is a sub-plot to all this, (as McClatchy notes):

“On this front, the administration enjoys support from unlikely allies. Eliot Engel, the Democratic chairman of the House Foreign Affairs Committee … said the Mediterranean gas forum project was a strategic opportunity for the U.S. to stymie Russian influence efforts over local energy resources. “I think that [Russian President Vladimir] Putin and Russia can’t and should not be able to control the situation,” Engel stated”.

So, the US Administration is pursuing two bipartisan congressional efforts to ‘stymie’ Russia in the region: One is a bill promoting energy partnerships in the Eastern Mediterranean; and a parallel bill which threatens to sanction European firms supporting the construction of the Nord Stream 2 pipeline taking Russian gas into Germany.

There are however, two obvious big ‘catches’ to this notion of both ‘stymying’ Russia, whilst simultaneously normalising Israel economically into the region. The first, as Simon Henderson of the Washington Institute notes, [is the notion that] the area’s underlying geology could help Europe offset, or even replace, its dependence on Russian gas “seems farfetched at the present level of discoveries. Several more giant fields like Leviathan or Egypt’s Zohr would have to be found before this reality changes”:

“The idea that East Mediterranean energy could impact on the European energy balance in such a way as to dent Russian market share is a fantasy – Europe’s thirst for gas is so huge, and Russia’s ability to provide that gas is so great, that it’s a wild dream to even hope we can achieve it given the limited reserves discovered thus far,” Henderson said. “Hoping you can find gas is not the same as finding gas”.

In short, an Egyptian ‘hub’ serving exports, might only ‘work’, as matters stand, through patching some of the smaller East-Med discoveries – together with a large Israeli contribution – through pipelines into the two Egyptian gas liquefying plants near Port Said and Alexandria. But LNG availability globally is high, prices are hugely competitive, and it is by no means certain that ‘the hub’ can be commercially viable.

And here is the main catch: Geo-politics. Anything aimed at integrating Israel into the region is bound to be sensitive. So, whilst US officials are optimistic about Egypt’s leadership of their ‘gas forum’ in the wake of President Sisi’s April meeting with Trump – Egypt – a mainstay to the separate US Iran confrontation plan – shortly afterward the visit, rather notably withdrew from the strategic military alliance the Trump administration was trying to build to confront Iran: The Middle East Strategic Alliance (MESA), to the consternation of US officials.

When it comes to energy deals, however, even having a treaty with Israel does not put an end to public sensitivities about rapprochement with Israel, Henderson notes. Notwithstanding any ‘peace treaty’, many Jordanians still oppose the prospect of using (Israeli) Leviathan gas to provide for large-scale electricity generation, beginning early next year. Amman has tried to deflect such anger by calling the supplies “northern gas” or “American gas”, emphasizing Noble’s role in producing it.

But here is the other side to the issue: Clearly, Egypt does not want to be a part of any anti-Iranian US-led alliance (MESA). But equally, why should Egypt – or Jordan, or for that matter, or any other member of the ‘gas forum’ – wish to be tightly aligned with an US anti-Russian strategy for the region? Egypt may have signed up to the US ‘gas hub’ project. But at the very same time, Egypt also was signing a $2 billion contract to buy more than twenty Russian Sukhoi SU-35 fighter aircraft. Do ‘hub’ members really judge an Egyptian ‘hub’ to be a rival to Russian gas in Europe?

Probably not: For ultimately, the idea that a putative energy hub can ‘stymie Russia’ indeed is fantasy. Europe’s thirst for gas indeed is so huge, and Russia’s ability to provide that gas so great, that it is a wild dream to even think it. The EU shows, for example, no particular interest in the US supported $7 billion mooted pipeline linking the eastern Mediterranean through Cyprus, to Greece. The undersea terrain is too problematic, and the cost too high.

Israel too, hopes to find more gas (of course). But the deadline for bids on nineteen of its offshore blocks has been pushed back to mid-August – seemingly reflecting a lack of investor interest. For now, the oil majors seem more tempted by the Cypriot blocks – up for bid.

But politics again: being a part of America’s ‘gas forum’ in which the Nicosia (i.e. the Greek-linked) government is a key member, explicitly places the forum and its members on a potential collision course with Turkey, who will not readily yield on its ambitious claims on the East Med basin (it has just announced that it will establish naval and air bases in Northern Cyprus). Nor will Lebanon, either. Sisi and Erdogan share a mutual, personal dislike, but will the others wish to be drawn into that quarrel?

Russia anyway, seems not greatly interested in the production possibilities of the Mediterranean Middle East. Rather it is focused on a pipeline corridor stretching from Iran and Iraq to Europe via Turkey or (eventually) Syria.

In sum then, the Kushner – Trump ‘Deal’, in respect to the integration of Israel into the regional energy economy seems destined to draw the same skepticism and distrust, as does the ‘Deal’s’ other parts.