HOME / WORLD / No Weapon Left Behind: The American Hybrid War on China 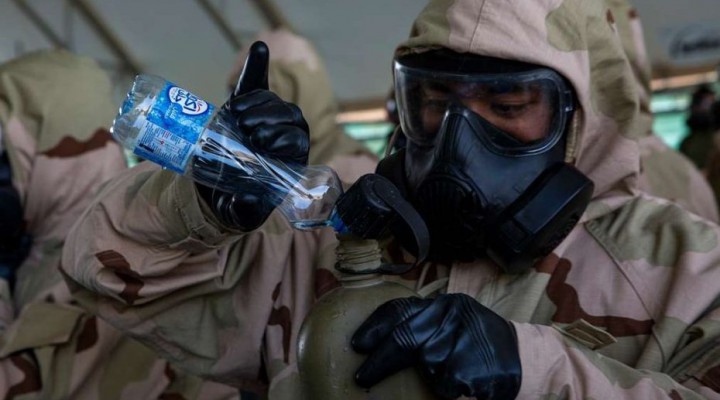 On the surface, coronavirus is a dream bio-weapon for those fixated on wreaking havoc across China and praying for regime change.

The New Silk Roads – or Belt and Road Initiative (BRI) – were launched by President Xi Jinping in 2013, first in Central Asia (Nur-Sultan) and then Southeast Asia (Jakarta).

One year later, the Chinese economy overtook the U.S. on a PPP basis. Inexorably, year after year since the start of the millennium, the U.S. share of the global economy shrinks while China’s increases.

China is already the key hub of the global economy and the leading trade partner of nearly 130 nations.

While the U.S. economy is hollowed out, and the casino financing of the U.S. government – repo markets and all – reads as a dystopian nightmare, the civilization-state steps ahead in myriad areas of technological research, not least because of Made in China 2025.

China largely beats the U.S. on patent filings and produces at least 8 times as many STEM graduates a year than the U.S., earning the status of top contributor to global science.

A vast array of nations across the Global South signed on to be part of BRI, which is planned for completion in 2049. Last year alone, Chinese companies signed contracts worth up to $128 billion in large-scale infrastructure projects in dozen of nations.

The only economic competitor to the U.S. is busy reconnecting most of the world to a 21st century, fully networked version of a trade system that was at its peak for over a millennia: the Eurasian Silk Roads.

Inevitably this state of things is something interlocking sectors of the U.S. ruling class simply would not accept.

Branding BRI as a “pandemic”

As the usual suspects fret over the “stability” of the Chinese Communist Party (CCP) and the Xi Jinping administration, the fact is the Beijing leadership has had to deal with an accumulation of extremely severe issues: a swine-flu epidemic killing half the stock; the Trump-concocted trade war; Huawei accused of racketeering and about to be prevented from buying U.S. made chips; bird flu; coronavirus virtually shutting down half of China.

Add to it the incessant United States government Hybrid War propaganda barrage, trespassed by acute Sinophobia; everyone from sociopathic “officials” to self-titled councilors are either advising corporate businesses to divert global supply chains out of China or concocting outright calls for regime change – with every possible demonization in between.

There are no holds barred in the all-out offensive to kick the Chinese government while it’s down.

A Pentagon cipher at the Munich Security Conference once again declares China as the greatest threat, economically and militarily, to the U.S. – and by extension the West, forcing a wobbly EU already subordinated to NATO to be subservient to Washington on this remixed Cold War 2.0.

The whole U.S. corporate media complex repeats to exhaustion that Beijing is “lying” and losing control. Descending to sub-gutter, racist levels, hacks even accuse BRI itself of being a pandemic, with China “impossible to quarantine”.

All that is quite rich, to say the least, oozing from lavishly rewarded slaves of an unscrupulous, monopolistic, extractive, destructive, depraved, lawless oligarchy which uses debt offensively to boost their unlimited wealth and power while the lowly U.S. and global masses use debt defensively to barely survive. As Thomas Piketty has conclusively shown, inequality always relies on ideology.

We’re deep into a vicious intel war. From the point of view of Chinese intelligence, the current toxic cocktail simply cannot be attributed to just a random series of coincidences. Beijing has serial motives to piece this extraordinary chain of events as part of a coordinated Hybrid War, Full Spectrum Dominance attack on China.

Enter the Dragon Killer working hypothesis: a bio-weapon attack capable of causing immense economic damage but protected by plausible deniability. The only possible move by the “indispensable nation” on the New Great Game chessboard, considering that the U.S. cannot win a conventional war on China, and cannot win a nuclear war on China.

On the surface, coronavirus is a dream bio-weapon for those fixated on wreaking havoc across China and praying for regime change.

Yet it’s complicated. This report is a decent effort trying to track the origins of coronavirus. Now compare it with the insights by Dr. Francis Boyle, international law professor at the University of Illinois and author, among others, of Biowarfare and Terrorism. He’s the man who drafted the U.S. Biological Weapons Anti-Terrorism Act of 1989 signed into law by George H. W. Bush.

Dr. Boyle is convinced coronavirus is an

“offensive biological warfare weapon” that leaped out of the Wuhan BSL-4 laboratory, although he’s “not saying it was done deliberately.”

Dr. Boyle adds, “all these BSL-4 labs by United States, Europe, Russia, China, Israel are all there to research, develop, test biological warfare agents. There’s really no legitimate scientific reason to have BSL-4 labs.” His own research led to a whopping $100 billion, by 2015, spent by the United States government on bio-warfare research: “We have well over 13,000 alleged life science scientists… testing biological weapons here in the United States. Actually this goes back and it even precedes 9/11.”

Dr. Boyle directly accuses “the Chinese government under Xi and his comrades” of a cover up “from the get-go. The first reported case was December 1, so they’d been sitting on this until they couldn’t anymore. And everything they’re telling you is a lie. It’s propaganda.”

The World Health Organization (WHO), for Dr. Boyle, is also on it: “They’ve approved many of these BSL-4 labs (…) Can’t trust anything the WHO says because they’re all bought and paid for by Big Pharma and they work in cahoots with the CDC, which is the United States government, they work in cahoots with Fort Detrick.” Fort Detrick, now a cutting-edge bio-warfare lab, previously was a notorious CIA den of mind control “experiments”.

Relying on decades of research in bio-warfare, the U.S. Deep State is totally familiar with all bio-weapon overtones. From Dresden, Hiroshima and Nagasaki to Korea, Vietnam and Fallujah, the historical record shows the United States government does not blink when it comes to unleashing weapons of mass destruction on innocent civilians.

For its part, the Pentagon’s Defense Advanced Research Project Agency (DARPA) has spent a fortune researching bats, coronaviruses and gene-editing bio-weapons. Now, conveniently – as if this was a form of divine intervention – DARPA’s “strategic allies” have been chosen to develop a genetic vaccine.

The 1996 neocon Bible, the Project for a New American Century (PNAC), unambiguously stated, “advanced forms of biological warfare that can “target” specific genotypes may transform biological warfare from the realm of terror to a politically useful tool.”

There’s no question coronavirus, so far, has been a Heaven-sent politically useful tool, reaching, with minimum investment, the desired targets of maximized U.S. global power – even if fleetingly, enhanced by a non-stop propaganda offensive – and China relatively isolated with its economy semi paralyzed.

This report details the Chinese “people’s war” against coronavirus.

It’s up to Chinese virologists to decode its arguably synthetic origin. How China reacts, depending on the findings, will have earth-shattering consequences – literally.

Setting the stage for the Raging Twenties

After managing to reroute trade supply chains across Eurasia to its own advantage and hollow out the Heartland, American – and subordinated Western – elites are now staring into a void. And the void is staring back. A “West” ruled by the U.S. is now faced with irrelevance. BRI is in the process of reversing at least two centuries of Western dominance.

There’s no way the West and especially the “system leader” U.S. will allow it. It all started with dirty ops stirring trouble across the periphery of Eurasia – from Ukraine to Syria to Myanmar.

Now it’s when the going really gets tough. The targeted assassination of Maj. Gen. Soleimani plus coronavirus – the Wuhan flu – have really set up the stage for the Raging Twenties. The designation of choice should actually be WARS – Wuhan Acute Respiratory Syndrome. That would instantly give the game away as a War against Humanity – irrespective of where it came from.

0 thoughts on “No Weapon Left Behind: The American Hybrid War on China”