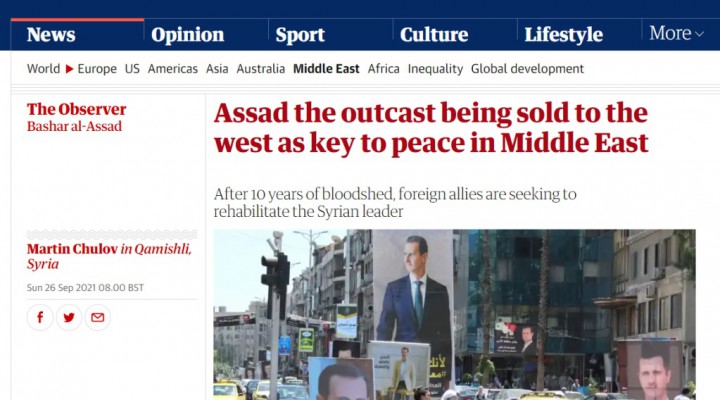 The recent article in The Guardian written by suspected MI6-linked Martin Chulov is a sign of the collapsing regime change project driven by the UK and US intelligence agencies since well before 2011. A war in a series of wars and coups that have plagued the region for decades. I recently wrote about the West being forced to partially normalise relations with President Assad after demonising him relentlessly since 2011. This is only the first in what will be a long line of climb-downs by the US/UK Coalition of intervention.

Jordan continues to break sanctions on #Syria. This would not happen without US UK permission. The US Coalition is being forced to climb down from regime change. Normalising relations with Assad are a thing since reclamation of #Daraa https://t.co/YQ5dAHMfcv

I asked Peter Ford, former UK Ambassador to Syria, to comment on the latest climb down by the UK deep state. This was his concise and scathing response:

How callously typical of it to voice pique at outcomes such as the gas deal which would bring relief to the sorely pressed people not only of Syria, but also Lebanon. Far better, in the Guardian world view, for ordinary Syrians and Lebanese to go on suffering indefintely until their countries become new Afghanistans, as long as the totem of resistance to the West, Assad, is removed.

How tiresome (so the Guardian seems to think) of Syria’s regional neighbours to accept that Syrian regime change has failed and look to their own self interest rather than plough on with a policy of ostracising and destabilising Syria which could only embolden the Syrian Taliban in Turkish-occupied northern Syria!