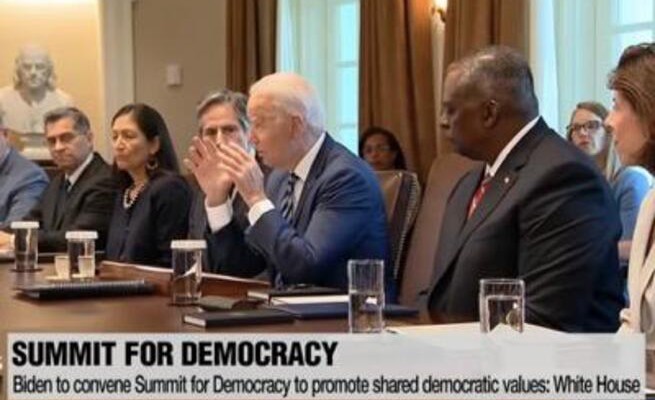 President Biden has announced the forthcoming creation of an international organisation of democracies in the face of the rise of authoritarian Russian and Chinese regimes. Contrary to the official rhetoric, this is not about defending democracies, but about promoting US imperialism. This fight is futile because it has chosen the wrong opponent.

The President of the United States, Joe Biden, has announced that he is convening a virtual summit on December 9 and 10, 2021 to defend “Democracy”. Three main themes will be discussed: “defending against authoritarianism, fighting corruption and promoting respect for human rights”. During the meeting, the leaders present will commit themselves “to improving the lives of their own people and to addressing the greatest challenges facing the world”. This will be followed by a second summit in 2022, at which leaders will report on progress made relative to their commitments.

These meetings were announced by Joe Biden during his election campaign. At the time, he said that the aim was to defeat Russia and China. The real objective is therefore to define a criterion that distinguishes the two blocks in formation, as in the past a capitalist world was distinguished from a communist world.

DEMOCRACY AS A POLITICAL REGIME

If in the 19th century, the United States was perceived as a new democratic model – see in particular Alexis de Tocqueville’s work, De la démocratie en Amérique -, today it is nothing more than an oligarchy: effective power is held by a tiny group of hyper-billionnaires outside public institutions, while the political personnel is reduced to the role of extra.

In practice, the United States has never recognised popular sovereignty, and therefore democracy. Instead, its constitution is based on the sovereignty of governors, although an electoral system has gradually been put in place. In the 2000 presidential election, there was a dispute between two candidates, George W. Bush and Albert Gore, over the recount in Florida. The Federal Supreme Court concluded that constitutionally it did not need to know the election results in Florida, but only the opinion of the local governor, Jeb Bush (the candidate’s brother). As a result, George W. Bush was declared the winner, while the Florida recount gave Al Gore as President.

Today, democracy as a political system is challenged by the Woke ideology that President Biden claims. Equity between ethnic groups, which he has made his pet subject, is opposed to equality between all [1]. The democratic institutions of the United States are being challenged in practice by the secret counting of ballots, which has given rise to the legitimate assumption of massive electoral fraud. Finally, the mob assault on the Capitol attests to the fact that democratic institutions have lost their sanctity.

ALL POLITICAL REGIMES COME AND GO

In the eighteenth century, Western monarchies had run out of steam. They no longer had any recognised legitimacy. They still claimed to be of “divine right”, but their subjects no longer believed in them. Regimes based on “popular sovereignty”, democracies, emerged. The remaining monarchies adapted, not by renouncing their ’divine right’, but by combining it with ’popular sovereignty’.

In the 20th century, when the economic crisis of 1929 hit, the Western press claimed that capitalism was dead and that a new political system had to be invented. First it was communism, then fascism. It should be remembered that Benito Mussolini had been Lenin’s representative in Italy before he came up with fascism. Capitalism was thoroughly reformed by Franklin Roosevelt, fascism was militarily defeated, communism collapsed with the USSR, and democracy survived.

In the 21st century, and more particularly since the Covid epidemic, we have witnessed the sudden emergence of some fifteen very large IT groups, around the GAFAMs (Google, Apple, Facebook, Amazon and Microsoft). Their power is now greater than that of most states. They do not hesitate to censor the ideas they want and the people they want. This includes information from states about Covid’s medical treatments, and even messages from heads of state and government themselves, right up to the sitting US president. No political leader keeps Bill Gates (Microsoft) or Jeff Bezos (Amazon) waiting if one of them phones him, but he can delay or even refuse a communication from the US President. They are imposing their agenda, transhumanism, which should turn us into computerised animals and their leaders into superior beings who go out to conquer space.

Under these conditions, all democracy has become impossible. Western voters are going to the polls less and less because they have understood this. Only a third of those registered to vote in the last French elections did so. The institutions are still democratic, but democracy is a practice and the French have become detached from it.

This situation is absolutely new. It is true that the disappearance of the Western middle classes began with the dissolution of the Soviet Union, and the transformation of the European Common Market into a supra-national structure dates from the same period. But nothing, absolutely nothing, foretold what is happening to us.

Democracy is, in the words of Abraham Lincoln, “Government of the People, by the People and for the People”. Today, nowhere does the People govern themselves. Even if some states are resisting, such as Iceland or Switzerland, the fact is that the democratic ideal has become impossible to implement in the face of GAFAM. In the absence of democracy, i.e. the participation of the People in political life, the most important thing is to ensure that the decisions taken are in the general interest, which is what we call the Republic.

This situation is changing month by month. We have to fear terrible developments for our freedoms and for our means of living. In any case, the current facts are already unacceptable.

We cling to our formerly democratic regimes because we do not know what to replace them with. But we increase our problem by denying the obvious. So, just as we have kept monarchies alive beyond the end of “divine right”, we keep our democracies alive beyond the failure of “popular sovereignty”. However, the situations are not identical: no one believes in divine right power any more, but we have all experienced the validity of the principle of popular sovereignty. It is not a question of making a revolution against the GAFAMs, but of waging a war to make them give back the Power they have stolen from us. It is not a question of imagining a new type of political regime, but of defining rules that make democracy possible again.

DEMOCRACY AS A POLITICAL WEAPON

Just after the dissolution of the USSR, US President Bill Clinton asked himself the same question as his successor Joe Biden: how to distinguish the Western bloc from the others? He devised a ’Global Democracy Strategy’ and set up a secret group in the White House to implement it.

We do not know who constituted this group, but we have identified its evolution during George W. Bush’s term. It was led by Liz Cheney (daughter of Vice President Dick Cheney) and Elliott Abrams (who organised the parliamentary overthrow of Hugo Chavez at the end of Bush Jr’s term [2] ). This group oversaw several overthrows at the National Security Council, such as that of the constitutional president of Honduras, Manuel Zelaya. It did not practice the military methods of the CIA, nor the pseudo-revolutionary methods of the NED, but invented a model for parliamentary coups. What followed was an epidemic of parliamentary overthrow of governments in Latin America.

Experience shows that democracy is now only a form, not a reality. One can trample on the Constitution and overthrow a government ’democratically’ as long as one puts a parliamentarian in charge.

We have no doubt that this office in charge of the Global Democracy Strategy still exists and will soon be in the news.

Already, this Strategy again rekindles the project of an “Alliance of Democracies” promoted by the essayist Francis Fukuyama, which the Bush Administration had imagined replacing the United Nations. The former Secretary General of NATO, Anders Fogh Rasmussen, created in 2017 a Foundation for the Alliance of Democracies.

We need to admit that Russia and China are not worse than us, but rather face the same problem with a different culture. We need their help just as they need ours.

Together or separately, we will not find the solution immediately. We have to start fighting without knowing what form our victory will take, but we already know the basis. We must therefore specify the principle on which we want to build new democracies for ourselves or our children: the Republic.

Summary
States are being overtaken by new giant corporations, the GAFAMs. As a result, governments, whoever they may be, can no longer meet our expectations. It is wrong to speak of a “crisis of democracy” when it is a crisis of all political systems.
President Biden’s efforts to defend democracy are doomed to failure because they no longer correspond to the problems of the contemporary world. At most he can continue under this false banner to promote his country’s imperialism.
We can refuse the illegitimate power of GAFAM and defend ourselves by promoting not a political regime, but a decision-making criterion: the Republic.

How Rights And Liberties Ratings Are Fabricated