HOME / WORLD / Tearing Down the Edifice of American Democracy 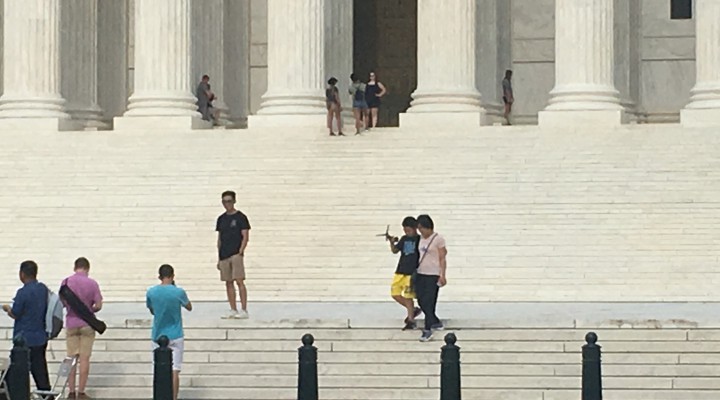 The joists & beams that hold U.S. democracy are not as flexible as they appear. They are the byproduct of societal passion of two political parties and are on the brink of failure.

The fact of the matter is that politics—at least how it is practiced in the United States—is more about perception than reality. The nuance associated with lawmaking, the arcane art of manufacturing the rules and regulations that hold society together, are hidden and therefore unknown to the vast majority of those who participate in the electoral processes that are the hallmark of American democracy.

Most Americans have not taken the time to follow a bill as it makes it way through the legislative process. Instead, they may hear about it at its inception, and then, if the bill is adopted, watch as the Executive signs it into law. They get the headline version—what the brokers of “truth” in the media opt to say about the legislation, and not what it really represents:  an amalgam of special interest money sprinkled with a modicum of societal need, want or desire.

Americans get their news like a baby bird gets its meal—waiting for a “mother” figure to digest it and then regurgitate it down their collective throats. They are not informed so much as shaped, the byproduct of a system that is built on manufactured consent derived from half-truths, myths and outright lies.

For politics to work in a nation as large and complex as the United States, there must be a rock-solid foundation upon which everyone operates. This role is served by the Constitution, the document which provides foundational principles that guide everything that follows. Adherence to the Constitution is mandatory if everything else that follows is to have a chance at success.

But even here, the perception of law-and-order masks a grim reality that the rules collectively embraced as “constitutional” are every bit as partisan as the politics Americans pretend are removed from their system of “blind” justice. For a rule to have meaning, it must be widely embraced as viable and fair.

In a system where the final arbiter of the rules is a panel of nine justices whose selection is predicated on the whims of a partisan political elite, the result of many of the most controversial decisions about the very rules that govern society come down to a narrow 5-4 vote, which means that while five justices believe that something is “constitutional”, there are four who do not. If that which divides the two sides is merely an interpretation of legal nuance, then this disparity is irrelevant—the underlying legal principle holds.

But when the deviation is significant, to the point that the difference represents a fundamental disagreement, then the law it portends to uphold itself becomes divisive. When something as supposedly as black and white as constitutional law comes down to a single vote by a highly politicized body, the reality is that the foundation it underpins is far more fragile than anyone realizes.

On top of this shaky foundation of politicized principle Americans have constructed an edifice of governance which is not nearly as solid as they would like to believe. The joists and beams that hold American democracy together are not as flexible as they appear. Like the Supreme Court, they are the byproduct of a bi-polar reality of societal passion contained in the vehicle of two political parties—Republican and Democrat—which must work in harmony if the building is to withstand the storms that periodically sweep across the landscape.

America was born from a revolution which manifested itself from the failure of the British system of colonialism, and further shaped by a Civil War where a divided nation had to be reformed into a union not through an expression of democratic will, but rather prodded along by the tip of a bayonet. In both Revolution and Civil War, it was the perception that the system of governance had failed the people, rather than the reality, that inflamed the masses.

The Pennsylvania farmer who marched to Boston in 1775, like the Pennsylvania farmer who marched on Richmond in 1865, was not versed in the political complexities that defined the side he was fighting for. These men fought for a unifying concept, a belief constructed more from passion than fact. For this concept to succeed, there needed to be a fundamental core of agreement, with the space between the differences that naturally arise when dealing with independently thinking humans kept as small as possible.

It is this space that is the key to the success, and ultimately survival, of the great American experiment in democracy. Here, Newton’s Third Law of Physics applies in full force—for every action, there is an equal and opposite reaction. American democracy is not a singular entity operating on its own, but rather formed from millions of threads of beliefs and passions that have come together in harmony.

These threads work if they operate on the same—or similar—wavelength, bending this way and that in relative unison. There can be pushing and shoving, but the harmonic holds so long as the resistance is minimal.

This notion fails, however, when the threads start to collide significantly—a strong push gets an equally strong pushback. The harmony is broken, and the weave of the threads unravels. So long as the American political parties served as a buffer to the passions and beliefs of their constituent threads, harmony could be sustained. To do this, the parties need to operate from the same sheet of music, directed by the same conductor.

A unifying narrative must be maintained to shape the perception of the people. When competing narratives exist, they must adhere to a similar core concept, or else risk being torn apart by the destructive echo produced by the space between.

The concept of a “stolen election” is the antithesis of the model of a free and fair election that underpins American democracy. For the supporters of Donald Trump, the events of Jan. 6 did not occur in a vacuum but were rather the culmination of what they believed to be a four-year campaign to undermine the legitimacy of the president they voted for and, by doing so, disenfranchising not only their vote, but by extension their role as citizens.

The collapse of the Russian collusion allegations is, today, historic fact. The recent declassification of additional documents related to the FBI’s counterintelligence investigation targeting the Trump campaign only reinforce what most Trump supporters had come to firmly believe—that the FBI, working in concert with the Obama administration and sympathetic Democrats and anti-Trump Republicans (John McCain comes to mind), sought to manufacture a narrative that could sustain the perception of Trump-Russian collusion in an effort to prevent Trump from prevailing in November 2016 or, failing that, serve as the basis of undermining his presidency going forward.

The persecution of Carter Paige, the politicization of the Steele Dossier, and the failure of the Mueller investigation have all been well documented, while the issue of legal culpability regarding the various Constitutional abuses associated with these, and other, activities may never be finalized.

In the end, the lack of legal finality misses the point. In the minds of Trump’s many supporters, there was clear and incontrovertible proof that the establishment was conspiring to suborn the victory they had achieved at the polls. The drawn out political drama that was the Democrats’ first effort to remove Trump from office through the vehicle of impeachment only reinforced this conclusion.

As fervently as the Democrats and their “never Trump” allies in the Republican Party believe that Trump and his supporters represent a clear and present danger to American democracy, so, too, do the supporters of Trump view those who conspired to undo the will of the people as expressed in a free and fair election as enemies of the state.

These perceptions remain valid in the minds of tens of millions of Americans as they watch the second impeachment trial of Trump get underway. Some view the proceedings as necessary justice; others as an act of political revenge. There is no common ground, and no outcome—either conviction or acquittal—will change that.

Joe Biden supporters will have four years to try and repair the institution of American democracy, but for all the rhetoric of unity, the impending second impeachment trial of Trump provides living proof that there remains a deep and dark divide between those who support the 46th president, and those who continue to support his predecessor—and never the two shall meet.

The Biden Regime Will Be America’s First Totalitarian Government

Q&A on the U.S. Capitol Attack and Government Response

0 thoughts on “Tearing Down the Edifice of American Democracy”