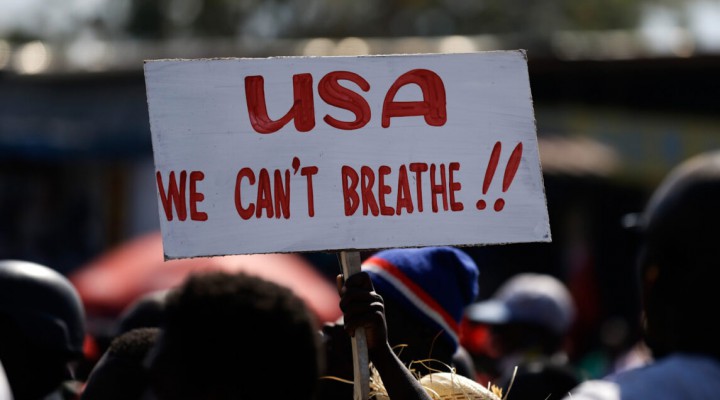 Dan Cohen- U.S. media has called for a U.S. military intervention in Haiti following the assassination of President Jovenel Moïse. MintPress News spoke to Haitians to ask them what they think about a possible fourth U.S. military invasion of Haiti since 1915.

Two weeks after the assassination of Haitian President Jovenel Moïse, the specter of U.S. military intervention looms large over the island nation. While the Biden administration has rebuffed a request for intervention made by Claude Joseph – a longtime NED asset whom Washington briefly backed as prime minister in the immediate aftermath of the killing – it has not completely ruled out the possibility.

​In the days immediately following Moïse’s grisly machine-gun murder on July 7 by U.S.-trained Colombian mercenaries, the Washington Post editorial board published a call for a “swift and muscular intervention” — what would be the fourth U.S. military invasion of Haiti since 1915, when U.S. Marines first occupied the hemisphere’s second independent nation.

WaPo Editorial Board’s call for UN intervention in Haiti is dripping with colonial condescension and implies Haitians are incapable of running their country. It never mentions the revolutionary fervor gripping the streets, only warns of possible “anarchy.” https://t.co/lf0dKUVhXH

On July 13, as the Biden administration signaled its reluctance to launch a full-scale invasion of Haiti, the Post editorial board published a second call for U.S. military intervention, suggesting that it was the least bad option.

WaPo Editorial Board’s call for UN intervention in Haiti is dripping with colonial condescension and implies Haitians are incapable of running their country. It never mentions the revolutionary fervor gripping the streets, only warns of possible “anarchy.” https://t.co/lf0dKUVhXH

Powerful interests want UN troops once again deployed to Haiti to reinforce its status as a US neo-colony, otherwise known as “peacekeeping.” https://t.co/QmRwEIYbos

Even the ostensibly progressive lawmaker Rep. Alexandria Ocasio-Cortez (D-NY) refused to take a clear position against an intervention, saying that she opposed it “right now” and “without any sort of plan.”

Asked about a potential US invasion of Haiti, @AOC stumbles through a statement opposing it but adds qualifiers that it’d be bad “right now” and “without any sort of plan.”

She won’t outright reject it because her career ambitions are too great. pic.twitter.com/flbY677sg1

While the Washington consensus is firmly in support of U.S. military deployment in Haiti, MintPress News traveled to Port-au-Prince to ask random Haitians in the street what they thought of a possible intervention.

​“We don’t want a military intervention,” Adrien Willien told MintPress. “We are for Haitians putting their heads together.”

​“We don’t want any foreign intervention to come resolve our problems for us,” echoed Ernst C. Denoir. “On the contrary, that would be pouring gas on the fire, making the situation worse.”

Contrary to the claims of self-appointed spokesman for the Haitain people Max Boot and his fellow neoconservative ideologues at The Washington Post, not a single Haitian with whom MintPress News spoke agreed. In fact, many were outraged at the suggestion and hold the United States responsible for the current violence and dysfunction plaguing Haiti.

“The insecurity you see here is programmed by the oligarchy and the imperialists,” thundered Denoir.

Meanwhile, thousands of Haitians turned out on Friday, July 23 for Moïse’s state funeral in Cap Haïtien, the capital of the northern department where he was raised. Many hurled curses at the U.S. delegation — which included U.S. Ambassador to Haiti Michele Sison, and was headed by U.S. Ambassador to the UN Linda Thomas-Greenfield — as it approached the funeral’s stage. The U.S. delegation fled the ceremony before it was over, when police fired warning shots and tear-gas to repel angry crowds wanting to enter the ceremony or stop it until the intellectual authors of the assassination are found.

​Despite its claims to have no plans “for now” to invade Haiti, the U.S. has appointed a Special Envoy to Haiti, Daniel Foote, and will begin advising the Haitian National Police (PNH) in “anti-gang fighting,” Haitilibre reported July 24.

​U.S. troops, backed by those from France and Canada, last invaded Haiti immediately following the February 29, 2004 coup d’état against President Jean-Bertrand Aristide. As was done after their 1994 intervention, they handed the ensuing military occupation of Haiti over to a United Nations “peace-keeping” force after three months. UN forces occupied Haiti for the next 15 years.

​The troop deployment violated Chapter 7 of the UN Charter, which specifies that the Security Council can use force only “to maintain or restore international peace and security” (i.e., in a conflict between two states), not to meddle in an internal political conflict. The Haitian Constitution also forbids foreign troops on Haitian soil.

​The 2004 intervention began on February 28 when a SEAL team, led by U.S. Chargé d’Affaires Louis Moreno, surrounded Aristide’s home, then threatened and browbeat the president into boarding an unmarked jet, which whisked him away to Africa. Aristide later called the abduction a “modern kidnapping.”

​“We remember that the U.S. came and took our charismatic leader, Jean-Bertrand Aristide,” in 2004, recalled Willien. “That coup d’état is the cause of the state we are in today.”

“The U.S. betrayed the Haitian people when it kidnapped Aristide,” Willien concluded.

The bitter taste of past military interventions and occupations informs the almost universal Haitian public opinion against another U.S. incursion.

Featured photo: A protester holds up a sign during a protest to demand the resignation of Haiti’s president Jovenel Moise in Port-au-Prince, Haiti, Wednesday, Jan. 20, 2021.  ( AP Photo/ Dieu Nalio Chery)

0 thoughts on “Haitians Reject Calls For US Military Intervention”