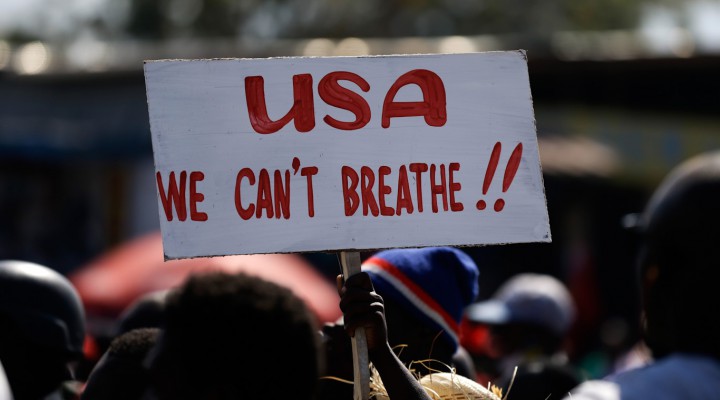 Protests in Haiti have led to hundreds of deaths yet have drawn little attention in the west, thanks in large part to its strongman leaders’ continued loyalty to the United States.

MPN- After five years of highly contentious rule, Haitian president Jovenel Moïse was scheduled to finally step down last week. However, his announcement that he would stay in office for (at least) one more year brought fresh impetus to nationwide protests that have continued almost unbroken since 2018. The protests have led to hundreds of deaths yet have drawn little attention in the West, largely because Moïse continues to be a loyal U.S. ally.

Thousands of people are out on the streets of Port-au-Prince daily, building barricades, burning tires, and demanding the president’s resignation. Many have been met with rubber bullets and even live ammunition from Moïse’s forces.

Pro-democracy protest in #Haiti's capital continues to swell in size. People insist term of @moisejovenel ended Feb. 7, 2021 and a new govt of transition must oversee next elections pic.twitter.com/uMcHrqvgBI

Increasingly, however, public anger and frustration are turning towards the United States, and in particular, U.S. Ambassador Michele Jeanne Sison. “Down with Sison” has become a rallying cry of the movement after the U.S. State Department threw its weight behind Moïse, backing his plan to stay in power until next year. “In accordance with the Organization of American States position on the need to proceed with the democratic transfer of executive power, a new elected president should succeed President Moïse when his term ends on February 7, 2022,” said State Department spokesperson Ned Price.

In a widely shared video on social media, one Haitian protester sent a message directly to the ambassador. “Madame Sison…Haiti is not for George Bush. It’s not for the Clintons; it is for Jean Jacques Dessalines,” he says, referencing the country’s revolutionary hero. “Sit your ass somewhere and stop interfering in our lives and in our nation…Down with Jovenel. Take him away and do whatever you want with him,” he adds.

WATCH: Message to US Ambassador to #Haiti Michele Sison, who lies on our constitution to keep her puppet dictator in power.

"Sit your ass somewhere and stop interfering in our nation. Haiti is for Jean Jacques Dessalines and his children. It's not for Lincoln, Bush or Clinton." pic.twitter.com/vceRFLWm7T

Experts appeared unsurprised that the United States was drawing the protesters’ ire. “The embassy is making clumsy attempts at fending off a crisis of legitimacy that has been mounting for years now,” Jeb Sprague, author of “Paramilitarism and the Assault on Democracy in Haiti,” told MintPress News this morning. “The US government holds the biggest share of responsibility, with the OAS and UN coming in a close second.”

The U.S. has been interfering in Haitian politics throughout the nation’s 200-year existence. For decades, it refused to recognize the new republic, fearing that legitimizing the slave uprising led by Toussaint L’Ouverture and Jean Jacques Dessalines would inspire its own enslaved black population to rebel. It also supported the forced payment of enormous reparations to France, something which Haiti was not able to pay off until 1947.

Throughout much of the twentieth century, the United States directly occupied Haiti, doing so for 19 continuous years between 1915 and 1934. At other times, it kept vicious and brutal dictatorships in place on the island, most notably the regimes of François “Papa Doc” and Jean-Claude “Baby Doc” Duvalier. Baby Doc was overthrown by a popular rebellion in 1986, paving the way for the country’s first popularly-supported leader, Jean-Bertrand Aristide, elected in 1990 (despite considerable American pressure against it). Aristide was quickly overthrown with American help, and after he was reelected again, the U.S. engineered another coup in 2004, exiling him to South Africa. Since his banishment, Washington has partnered with successive rulers to plunder the Caribbean nation. This process accelerated after the devastating 2010 earthquake that left Haiti in such a poor state that it was powerless to stop a foreign takeover of the island engineered by the U.S. and the UN.

“The political scene in Haiti has been manipulated through a long history of Western intervention,” Sprague said. “Today we see the latest example, with the US backed government of Jovenel Moïse attempting to illegally do away with the country’s anti-Duvalierist constitution.”

Four Years After The Haiti Earthquake, What Have Billions In US Aid Bought?

After dismissing parliament last year, Moïse has been ruling by decree. While he has lost support from a number of important sectors of society, including the influential Catholic Church, if history is any judge, continued backing from Washington could remain crucial in extending his rule for at least one more year — one reason why the protest movement is turning its sights directly towards President Biden and the U.S. embassy.

Feature photo | A protester holds up a sign during a protest to demand the resignation of Haiti’s president Jovenel Moise in Port-au-Prince, Haiti, Jan. 20, 2021. Dieu Nalio Chery | AP

0 thoughts on ““Stop Interfering in Our Lives”: Haitians Protesters Condemn US Support for Dictator”