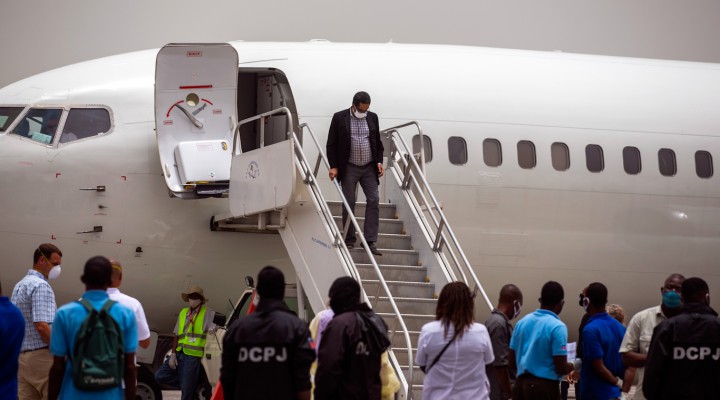 Emmanuel “Toto” Constant was immediately arrested after touching down in Port-au-Prince, 26 years after he fled to the US following the Raboteau massacre.

MPN– After decades escaping justice, the United States finally deported death squad leader Emmanuel “Toto” Constant back to Haiti yesterday. Constant, leader of the infamous Revolutionary Front for the Advancement and Progress of Haiti (FRAPH) paramilitary, was immediately arrested as he touched down on the tarmac in Port-au-Prince, 26 years after he fled to the United States, where he received de facto political asylum. Constant was sentenced in absentia to life in prison by a Haitian court for his role in leading the 1994 Raboteau massacre, where the FRAPH slaughtered supporters of the recently ousted President Jean-Bertrand Aristide, who had been protesting the military dictatorship that overthrew him.

However, none of the Haiti experts that MintPress spoke to saw the news as a welcome development.

“The timing of Constant’s deportation is especially worrisome. Not only did it occur in the midst of a global pandemic, with local resources stretched thin and attention focused elsewhere, but he can count on the support of certain segments of those in power in Haiti today,” said Jake Johnston, Senior Research Associate at the Center for Economic Policy Research in Washington, D.C., a think tank specializing in domestic and Latin American matters. “Prior Haitian governments had requested the U.S. deport Constant so that he could face justice for his role in the Raboteau massacre. The U.S. refused. Now, however, with one of his codefendants in the high command of the newly reinstalled military, former allies close to power, and a deeply politicized judiciary, his deportation is unlikely to lead to real justice or accountability – as surely the U.S. administration understands,” he added.

Jeb Sprague, a Research Associate at the University of California, Riverside, and author of “Paramilitarism and the assault on democracy in Haiti,” agreed. “My guess is that the government of Jovenel Moïse will not prosecute him. That government is very close to the far-right. And in fact it has a lot of former death squad and military members in official positions in the government,” he told MintPress.

Kim Ives, a journalist at Haiti Liberté, was even more downcast: “I’m disgusted. I suspect he may walk freely in Haiti soon, one way or another” he told MintPress, explaining that “his return to his homeland couldn’t come at a worse time. His right-wing political allies are in power. President Jovenel Moïse of the Haitian Bald Headed Party (PHTK) currently rules Haiti by decree. Parliament has been disbanded, and Haiti’s judges are on strike.”

Constant, the son of a military general under the murderous Duvalier dictatorship (1957-1986), modeled his FRAPH on the feared Tonton Macoutes death squads that terrorized Haiti throughout that era. Human rights groups estimate that the FRAPH killed some 3,000 political opponents during the 1991-1994 dictatorship that deposed Aristide, the country’s first democratically elected leader. It was public knowledge that he was supported by Washington. “We know that he was getting paid monthly by the CIA. He would brag that he was protected by them, later on, so it is very scary the level of impunity that these types of individuals have,” said Sprague. As Aristide returned to power in 1994, Constant fled to New York City, where he worked as a real estate broker. The U.S. blocked all extradition requests from Haiti. Despite his connections, in 2007, an American court found him liable for torture, attempted extrajudicial killings and crimes against humanity, ordering him to pay compensation to women who claim they were raped and had their breasts cut off by his forces.

A history of violence

“For the brief period of Haiti’s democracy, between 1995-2004, the U.S. protected the many killers that it used in its long-running war against the Haitian people. Emmanuel Constant was the most egregious example. Through a coup and occupation, Haiti’s sovereignty was destroyed. Returning Constant to COVID-afflicted, ruled-by-decree Haiti is another insult to the people of the country and the victims of Constant and FRAPH. Haiti is in no position to bring such people to justice, and the U.S. knows it. But whatever miscarriage of justice happens now, the U.S. will comfortably blame Haiti for it,” Justin Podur, author of Haiti’s New Dictatorship, told MintPress.

In 2008, Constant was convicted of mortgage fraud and grand larceny, serving 12 years in a New York prison. As part of the Trump administration’s push to expel more immigrants, he was immediately scheduled for deportation after his sentence was up. However, his case kept getting stalled, leading to suspicions that he was still under CIA protection.

The US Keeps Trying, and Failing, to Deport a Former CIA Operative Back to Haiti

Constant’s mission during the 1990s was to destroy the progressive, grassroots movement around Aristide, pacifying the country and paving the way for a return to the military dictatorship that had ruled for decades. Aristide unexpectedly came to power in 1991 in the country’s first (reasonably) democratic election, beating a U.S.-backed Duvalier official Marc Bazin, a former World Bank economist. Aristide was a radical priest who preached the doctrine of liberation theology and called for a political revolution, and unbeknownst to the outside world, a huge nationwide democratic movement was building. He took the election in a landslide, winning 68 percent of the vote to Bazin’s 14 percent, shocking the Haitian establishment and Washington alike.

However, hope was dashed as he was deposed in a coup that the first Bush administration, behind the scenes, worked hard to ensure was successful. Bazin was installed as leader anyway. With their man at the helm, Washington, the World Bank and others were confident that Haiti would finally become “the Taiwan of the Caribbean” they had been predicting it would be since the 1980s. But the only results of the wide ranging structural adjustment reforms was to destroy Haitian agriculture and to turn the country into one of the most exploited sweatshop states in the world.

Remarkably, Aristide’s career was far from over, returning to the country’s top position in 1994, being re-elected in 2001. While in power, he oversaw a massive public education, health and literacy drive, doubling the minimum wage and introducing land reform measures. However, the second Bush administration managed to orchestrate his removal in a coup in 2004. Since then, the country has been in serious political decline, resulting in a situation today where President Moïse has canceled elections and rules by decree, triggering nearly two years of ongoing nationwide protests that have rocked the nation but have received scant attention in the Western press.

“The US diplomatic-military-intelligence apparatus has local allies on the ground that it works with and Constant is a perfect example of that. And so Haiti itself suffers from this total impunity for past right-wing violence. After the 2004 coup d’état, so many of the people involved in massacres and assassinations of social movement activists, labor and left-wing protestors, and so many of the individuals who had been involved in the killing of these grassroots now have complete impunity,” said Sprague. Thus, while on the surface, the news about Constant may seem like a positive step, it is far from certain whether he is returning to face justice or because it is now totally safe for him to do so. Most fear the latter.

Feature photo | Emmanuel Constant who has just been deported from the US walks down the stairway of a plane as he arrives at the Toussaint Louverture International Airport in Port-au-Prince, Haiti, June 23, 2020. Dieu Nalio Chery | AP