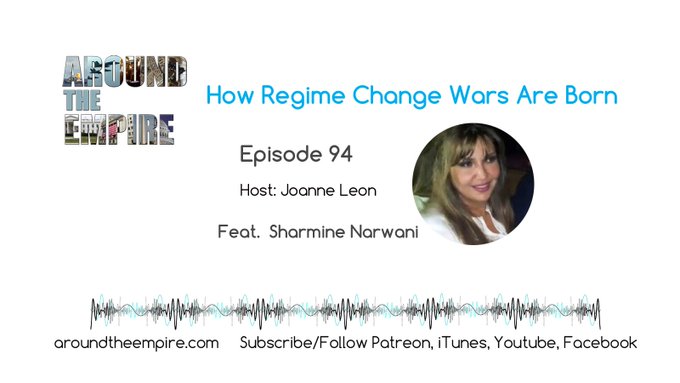 Sharmine Narwani joins us today to talk about how western regime change wars are born and raised. She offers some of her research and analysis on Middle East wars, particularly the war in Syria as a comparison to what we are seeing in Venezuela today and with a special focus on how it all starts with a carefully crafted narrative.

Sharmine is a commentator and analyst of Mideast geopolitics based in Beirut. She is a former senior associate at St. Antony’s College, Oxford University and has been published by a wide variety of publications, including the New York Times, the Guardian, Asia Times Online, al Akhbar English, Al Jazeera and RT.  And you can always find her writing at her website, MidEastShuffle.com.

The methods used in much of the regime change and destabilization that we have seen so frequently in recent years is laid out in the 2010 Unconventional Warfare (UW) Manual of the US Military’s Special Forces, which was leaked in 2010. Sharmine has written about it and shares some of those insights today. This manual begins with the following paragraph:

But, as we note in our conversation, the world is changing and the success rate of these methods, used for decades by the American empire and its allies, is declining. The political environment in America and even more consequential, the balance of power in the world is also in a state of flux, dynamic and uncertain. There are many signs that the American people want to adopt a new approach toward the world and foreign policy. But it remains to be seen whether the elected government, the plutocrats and the dominant national security state will be able to accept a new global reality and the loss of their sole superpower empire.

How the West Weaponizes Refugees it Creates