HOME / WORLD / The myth of the HIMARS ‘game changer’: American-supplied rocket system is effective, but it won’t bring victory to Ukraine

The myth of the HIMARS ‘game changer’: American-supplied rocket system is effective, but it won’t bring victory to Ukraine 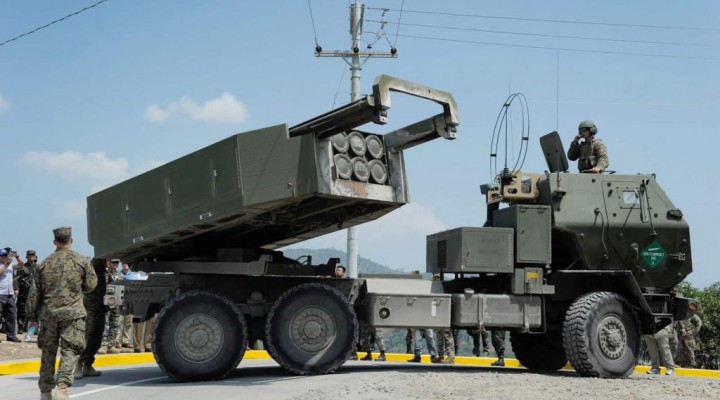 As former US President Donald Trump proved before he was banned by the platform, there’s always a tweet.

“HIMARS have arrived to Ukraine. Thank you to my US colleague and friend @SecDef Lloyd J. Austin III for these powerful tools! Summer will be hot for Russian occupiers. And the last one for some of them.”

Thus wrote Aleksey Reznikov, the Ukrainian minister of defense, on June 23. He followed it up with another tweet on July 4, wishing the American people a “Happy Independence Day” while thanking them for their continued support for the Ukrainian cause. Reznikov highlighted the role being played by HIMARS, which he called “a game changer at the front lines.”

In the weeks following Reznikov’s announcement of the arrival of the US-made M-142 High-Mobility Artillery Rocket System (HIMARS), the hype that accompanied the deployment of this new weapon, from both the Ukrainian and Russian sides, does not appear to substantiate the minister’s claim that Kiev now possesses “game changing” technology.

The harsh reality of war is that any modern weapons system, when employed effectively, is capable of inflicting casualties on an opponent.

Igor Strelkov, a pseudonym for Russian nationalist Igor Vsevolodovich Girkin, whose past employers include the FSB (state security service) and the Donetsk People’s Republic’s militia, reported some of the ensuing destruction on his Telegram channel.

“Over the past five to seven days,” he wrote on July 10, “more than 10 large warehouses of artillery and other ammunition, several oil depots, about a dozen command posts and about the same number of personnel locations in our near and deep rear were hit. As well as several air defense and artillery positions. BIG losses in personnel and equipment have been suffered.”

Alexander Sladkov, a military journalist and special correspondent for Vesti VGTRK, a Russian television channel, appeared to confirm Strelkov’s information, posting the following on his own Telegram channel: “Ukrainian missile and artillery have already struck several times at our decision-making centers. With results. The centers are not big, but important.”

Both Strelkov and Sladkov were dismissive of Russia’s response for what they – correctly – describe as a major escalation on the part of Ukraine and its US-NATO supporters.

A typical HIMARS battery, as employed by both the US and NATO, includes nine launchers supported by dozens of other support vehicles. The US has, to date, reportedly provided Ukraine with eight to 12 of these systems, which are manned by specially trained Ukrainian artillerymen who have undergone a three-week training course in Grafenwoehr, Germany, provided by the US Army.

According to the Institute of War, a US-based think tank, “Ukrainian forces are increasingly targeting Russian military infrastructure with indirect fire and US-provided HIMARS systems deep in occupied territory.” It concludes that “the increased ability of Ukrainian forces to target critical Russian military facilities with Western-provided HIMARS demonstrates how Western military aid provides Ukraine with new and necessary military capabilities.”

The Kyiv Independent, a Western state-funded propaganda outlet, reported that “by July 7, Russia had lost most of its key ammunition depots, and many of its smaller depots in occupied Donbas. Notably, many key targets as much as 50-80 kilometers into Russian-controlled territory have been successfully destroyed.”

Max Boot, a Moscow-born military analyst who writes for the Washington Post, was so impressed with the performance of HIMARS that he wrote an op-ed in which he confidently announced “To shorten the War, send 60 HIMARS to Ukraine.”

I mean, if eight HIMARS have brought the vaunted Russian war machine to its knees, imagine what could happen if Ukraine had 60? Wait, there is an answer to that question. In a recent interview with the Sunday Times, Reznikov revealed that Zelensky “had ordered Ukraine’s military to retake occupied coastal areas which are vital to the country’s economy.”

Ukraine, it seems, is winning the war against Russia.

Except, of course, it is not. Not even close. The notion that the HIMARS is a “super weapon” capable of turning the battlefield narrative in eastern Ukraine on its head is, simply put, pure nonsense.

Russia has, over the course of the past three months, perfected the art of war when it comes to defeating the Ukrainian military. John Boyd, the famous American fighter-pilot-turned-military theorist, coined a concept, known as the “OODA-Loop” (Observe, Orient, Decide, Act), which represented the phases involved in military operations. The side that could master the OODA-Loop more efficiently than its opponent would “get inside their decision-making cycle,” forcing the enemy to operate in a purely reactive mode, enabling the superior party to achieve victory.

Russia has got “inside the decision-making cycle” of every one of its opponents during the military operation in Ukraine, dominating the conflict economically, politically, and militarily.

HIMARS does not change this reality.

The Russian military, like any successful military organization, is highly adaptive – it must be to survive on the modern battlefield. The conflict in Ukraine is unlike any experienced in modern times, requiring Russian military leaders to adapt operational theory as defined by doctrine to the demanding realities of the eastern Ukrainian front. The fact that approximately 200,000 Russian forces can impose their will on over 700,000 Ukrainian defenders while achieving casualty ratios that are decisively in their favor speaks to the reality of their OODA-Loop dominance.

At the end of the day, HIMARS – and other so-called “advanced Western weapons” – is but a tool wielded by the same actor who has been systematically defeated by the Russian military. This will not change, whether Ukraine employs four, eight, 12… or even 60 HIMARS systems.

First and foremost, the survivability of the HIMARS is a critical factor – Russia excels at destroying Western-provided weaponry. The HIMARS footprint is a large one, with dozens of trucks needed to carry the ammunition used by the launcher. Vehicles need fuel, and ammunition needs protective storage – as do the launchers. This considerable footprint creates a signature which is detectable by any capable intelligence service – and the Russians have capable intelligence services. Indeed, the irony is that the larger the number of HIMARS brought into service by Ukraine, the greater the likelihood of detection and interdiction (i.e. destruction) by Russia.

Already, Moscow has claimed to have destroyed two of the initial four HIMARS systems sent to Ukraine (this assertion has been vehemently denied by both Ukraine and the US.) It also claims to have destroyed several warehouses where HIMARS ammunition was being stored. The point is that Russia is not a passive actor on the military stage. The deployment of HIMARS was not a secret, and Russia had plenty of time to prepare for its appearance on the battlefield. This does not mean Ukraine is not inflicting casualties – HIMARS is a deadly weapon which, employed properly, can inflict death and destruction on its target. According to Kiev, the system was used in a recent attack on a Russian command post that killed a senior general officer (the Kremlin has not confirmed this result.)

Pro-Russian military analysts say the effectiveness of HIMARS has been enhanced through a tactic which involves the Ukrainian military firing off several salvos of long-range multiple-launch rocket systems. This prompts Russian surface-to-air missiles to engage over the intended target. Ukrainian forces then fire off the HIMARS rockets, which are able to penetrate the overwhelmed Russian air defense network.

The Russian military, however, is highly adaptive. It won’t take long for an adequate tactical answer to the HIMARS problem to be developed and employed. In the meantime, Russian military operations continue unabated throughout Donbass, with Moscow’s forces continuing their lethal domination of their Ukrainian opponents.

With all due respect, Aleksey Reznikov, HIMARS is not a game changer.

US to Send “Game-Changer” HIMARS to Ukraine: The Rest of the Story

The myth of the HIMARS ‘game changer’: American-supplied rocket system is effective, but it won’t bring victory to Ukraine

0 thoughts on “The myth of the HIMARS ‘game changer’: American-supplied rocket system is effective, but it won’t bring victory to Ukraine”