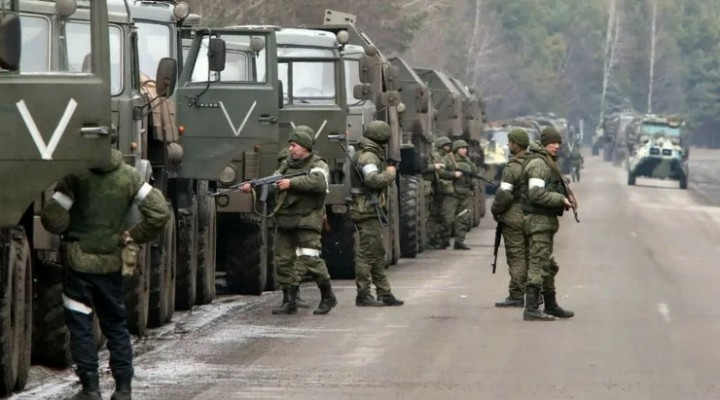 Few understand much about the Ukraine War. The Neocon staged coup in 2014 and the subsequent war, Ukrainian gangsters and NATO against the civilian population of the two regions that refused to accept the NATO takeover, was systematically eradicated from all reporting.

Israel has used this same method, broad control of the press while comfortably engaging in decades of war crimes is quite familiar.

In fact, it was Israel that put the Neocons in power in Washington. It was Israel that directed the 2014 coup and Israel behind the scenes in Syria, dictating US policy, the secret US/Israel/Saudi Arabia partnership with ISIS and al-Qaeda (both banned in Russia).

A Touch of History

Those few that risk naming names and point fingers at those really guilty see a historical pattern. Ukraine is, in actuality, made up largely of the ancient Jewish kingdom of Khazaria. In fact, the vast majority of Jews in Israel and around the world have no Semitic genes but are rather of the Indo-Turkish Khazarian peoples.

That kingdom was established in the 8th Century, and it is Khazarians, fleeing the Mongols and Huns, which made up the entirety of the Jewish population of Europe.

There was absolutely no immigration from Judea and Samaria to Europe, certainly not to Germany, Poland or Hungary, not before 1500 and not afterward as well.

There are no “Ashkanazi.” That’s just another fairy tale.

That said, a valid explanation of what we are seeing and fighting over today is the Zionist expression of Upper and Lower Khazaria, meaning Ukraine and Israel.

But rather than looking at these are a “restoration” of a Turkish people who chose the Jewish religion, something far darker is at hand.

What we have is “ground zero” for centuries old organized crime, all powerful, its hands in every cookie jar, its tentacles reaching every capitol.

Media disinformation regarding the root cause still dominates. Even alleged “pro-Russian” pundits damn Ukraine but fail to touch on those involved behind the scenes.

This “blindness” is pervasive and those who charm and entertain do so without touching on meaningful truth. Those who violate this cardinal rule get the bone saw or worse, if worse exists.

After 150 days of the current conflict in Ukraine, a detailed analysis of the players has made one thing clear, there would be no war, no insane expansion of NATO to the gates of Moscow without a “full court press” by Israel and its powerful lobby in the US.

Thus, when looking at who to blame, the “usual suspects,” big oil, the banks or even the shadowy “military-industrial complex” gets the nod from the tame and controlled.

Time and time again, when tracing back not just fabricated atrocities but the full-blown cooperation between Western media and Ukraine’s intelligence services, there is always one result.

The media war on Russia is run from Israel.

Leading the way are traditional lie machines long experienced at defending an apartheid state and damning the victims such as Newsweek, the New York Times, the BBC, the Guardian, the Daily Beast, CNN and the worldwide Mossad run Murdoch/Greenbaum/Maxwell organization.

They funded the Maidan coup in 2014 and the Trump coup attempt in 2021. The control America’s courts and they do the same in Great Britain and across the EU.

Congress, the Pentagon and the White House are simply “middle management” in their efforts to enforce a chaotic world order of poverty and oppression.

They rule Britain through Freemasonry and a long history of blackmail that was only touched on before the massive coverup of the “News of the World” Murdoch scandal exposed Britain as a Zionist client state.

There is much more to be learned from the “war of lies” than the battlefield. Simply put, in a world where national leaders and nation states themselves are little more than theatrical constructs, the media’s ability to sell false narratives is doomed to fail.

The power of the media is no longer absolute and there is a good reason. For years the “masters of the universe” worked to “dumb down” generation after generation” in America, pushing public focus on issues like transgenderism, birth control or fake terrorism.

Then they spice it up with fund raising events, generally mass shootings that seldom pass the “sniff test.” Gunmen are often police informants or carefully groomed “lone gunmen” who go on their shooting rampages often helped directly by police or aided by police “stand downs.”

To understand a “stand down,” think of 9/11 when that supposed jet airliner was heading toward the Pentagon while it was tracked minute by minute until impact. Do note that well before 9/11, the Pentagon was protected not only by air defense systems, but also by Stinger missiles deployed on the roof (like the White House) and, of course, by the largest air force in the world.

The Ukraine War takes things to new levels, however. One minute, the Zelenskyy forces are driving Russia to the Sea of Japan and then hours later the Russians capture a new city.

No one asks a question and there is no accusation of fakery as there is no one who can report them, no one not cleansed from the airwaves or internet by Google or the US Department of Justice.

In suicidal misjudgment, the Western media began spreading fake atrocity stories from day one, Russia “rape gangs,” and, of course, every bomb or shell hit an orphanage or maternity hospital.

We watched it play out in Ukraine in 2014 when snipers trained at the massive CIA gulag complex in Poland unleashed one of its terror brigades in a theatrical coup against an elected government in Ukraine.

In Poland, the CIA has 11,000 acres, some of it a secret prison with adjacent mass graves, leftovers from the fake “war on terror” as well as “Gladiator Schools” for ultra-nationalist/Nazi extremists who “serve” in every nation in Europe as a NATO “fifth column” against itself.

Yes, this is the world you live in.

NATO began destroying Europe half a century ago with Operation Gladio, a marriage between the Freemason “Mafia” and terror groups like Black September, Bader Meinhof and the Red Brigades.

Africa got Boko Harum (banned in Russia), al-Shabaab and others.

Perhaps the biggest victim, one generally ignored, is the United States.

The battle against the US began with 9/11, after years of planning, gaining control of any and all organizations that might impede the operation, Pentagon, White House and, of course, the Department of Justice.

Later those responsible would create the Department of Homeland Security as a mechanism for controlling it all, an empire built on fake intelligence, fake news and Snowden’s “surveillance state.”

A vital aspect of the “shell game” being played deeply parallels the effort made in Ukraine.

The same Americans and Israeli Americans that nazified Ukraine began the same process in the US under the guise of Christian Nationalism and “conservatism.”

Though painfully obvious, no pundit will report this, no whistles are blown and any voice that speaks up is shouted down by the totally controlled “liberal press” which really isn’t “liberal” at all.

Making things even worse, the world never sees what Americans think or believe as the biggest lies of all are those that misrepresent Americans as woefully ignorant and angry and fully in support of the false narrative, they are fed.

This is far from the case, particularly involving Russia and Ukraine. Efforts to put Zelenskyy in military garb are comic at best.

Still the Israel lobby and its press assets keep a continual flow of anti-Putin stories going and, using their stranglehold on Wikipedia (banned in Russia), Google’s search engines, Twitter and Facebook, any attempts worldwide to learn the truth leads to a spiraling descent into black propaganda.

In the US, the recent hearings over the January 6 coup attempt have revealed that the United States Secret Service was fully complicit in the try to overthrow the government.

An organization that had, for its existence, covered up personal failings of American leaders began, after 9/11, in taking part in trafficking children to the Bush (43) White House (direct sources) and, under Trump, being invited in as full partners in a much-broadened version of that effort.

Then there is this other mysterious issue, Trump’s extremely strange and divergent, even purposefully self-defeating COVID effort that led to one million American deaths.

While claiming COVID would simply go away, Trump poured endless millions in vaccine development and billions more into failed treatments and other ramshackle schemes.

Billions were stolen, much by Trump family members but more by the MEGA billionaires who created companies just to absorb untraceable COVID cash.

Then we also remember how they supplied drinking water, unfiltered, pumped straight out of the sewage fed Euphrates River. No one was ever allowed to investigate; no lawsuits were allowed for Typhoid and Diphtheria outbreaks among American “war fighters.”

With COVID new games were tried out with MEGA billionaires pouring cash into anti-lockdown efforts, support by endless Israeli financed pundits telling Americans that vaccinations and masks actually cause disease.

These same pundits, for cash of course, disputed ties between cigarettes and cancer, fracking and poisoned drinking water and the dangers of poorly run nuclear power plants.

Is there something “Israeli” about loving pollution?

Then again, when did Israel fall in love with Naziism? Israeli oligarchs funded Azov and Aidar (banned in Russia) and Israel trained their fighters.

Then again, Israel has never had a bad experience with al Qaeda or ISIS (both banned in Russia) as well.

The issue is one of facing reality.

It doesn’t matter what Americans believe or think as the electoral process disappeared long before Donald Trump came on the scene. Rare candidates that were allowed to enter office with some shred of decency were quickly murdered or, as with Jimmie Carter, destroyed by a federal reserve shut down of the money supply and an Iranian hostage issue orchestrated by the CIA and George H.W. Bush and his “October Surprise.”

All Sides Of The Ukrainian Conflict Underestimated Each Other