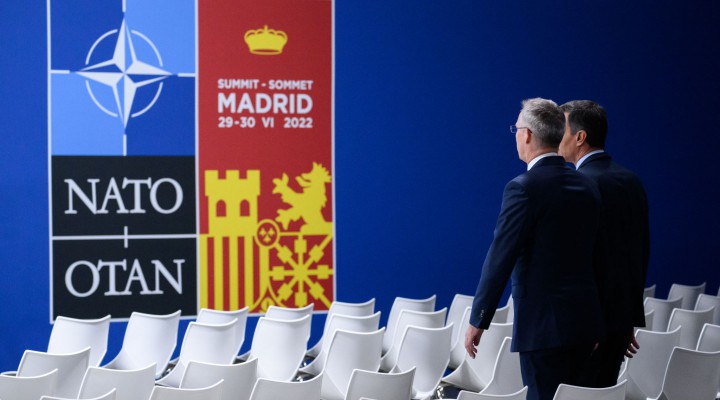 From an ostensible defensive alliance, NATO has grown into an aggressor designed to promote ‘rules’ dictated by the US

The North Atlantic Treaty Organization, or NATO, has just wrapped up its annual summit in Madrid, Spain. The one-time trans-Atlantic defensive alliance has, over the past three decades, transformed itself from the guardian of Western Europe into global cop, seeking to project militarily a so-called values- and rules-based posture.

NATO’s first Secretary General, Lord Ismay, famously noted that the mission of the bloc was “to keep the Russians out, the Germans down, and the Americans in.” In short, NATO served as a wall against the physical expansion of the Soviet Union from the perch it had established in eastern Europe at the end of the Second World War. Likewise, the creation of NATO prevented a treaty from being concluded between Germany and the Soviet Union that would enable the reunification of Germany. And lastly, the existence of NATO mandated that the US retain a significant full-time military presence in Europe, helping break America’s traditional tendency toward isolationism.

At the Madrid Summit, NATO radically redefined its mission to reflect a new mantra which could be encapsulated as “keep the Russians down, the Americans in, and the Chinese out.” It is an aggressive–even hostile–posture, premised on sustaining Western (i.e., American) supremacy. This mission is to be accomplished through the defense and promulgation of a so-called “rules-based international order” which exists only in the minds of its creators, which in this case is the United States and its allies in Europe. It also represents a radical break from past practice which sought to keep NATO defined by the four corners of its trans-Atlantic birthright by seeking to expand its security umbrella into the Pacific.

The guard dog had, it seems, been re-trained as an attack dog.

When an organization undergoes such a radical transformation in terms of its core mission and purpose, logic dictates that there exists a reason (or reasons) sufficient to justify the consequences attached to the action. There appear to be three such reasons. First and foremost is the fact that Russia refuses to accept NATO demands that it exist as a junior “partner” whose sovereignty must be subordinated to the collective will of post-Cold War Europe. Russia’s President, Vladimir Putin, has made it clear that Russia considers itself to be a great power, and fully expects to be treated as such–especially when it comes to issues pertaining to the so-called “near abroad”–those former Soviet republics, such as Ukraine and Georgia, whose continued ties with Moscow are existential in nature.

NATO, on the other hand, while calling Russia a “partner,” was never serious about extending a viable hand of friendship, instead undertaking a thirty-year program of expansion which violated verbal promises made to Soviet leaders, leaving Russia weakened and not to be taken seriously by the self-proclaimed “victors” of the Cold War. When Russia pushed back, a process marked by Putin’s iconic speech to the 2007 Munich Security Conference, NATO undertook a more aggressive stance, promising Georgia and Ukraine eventual membership in the Alliance and, in 2014, supporting a violent coup against a government in Ukraine that kicked-off a series of events which culminated in the ongoing military operation being conducted by Russia in Ukraine.

Speaking at this week’s NATO Summit, the Secretary General of the organization, Jen Stoltenberg, ended all pretense that the bloc was an innocent bystander in the events leading up to Russia’s military intervention in Ukraine, noting with pride that NATO had been preparing to fight Russia since 2014–that is, since the US-led coup. Indeed, NATO has, since 2015, been training the Ukrainian military to NATO standards.

Not to bolster the self-defense of Ukraine, but rather for the purpose of fighting ethnic Russians in the Donbass. NATO, it seems, was never interested in a peaceful resolution to the crisis, which flared up when Ukrainian nationalists began brutalizing the region’s Moscow-leaning majority.

Two NATO members, France and Germany, helped perpetuate a fraudulent peace process, the Minsk Accords, which former Ukrainian President Petro Poroshenko recently admitted was nothing more than a sham perpetrated for the purpose of buying time so that NATO could train and equip the Ukrainian military for the purpose of forcibly seizing control of both Donbass and Crimea.

All the 2007 Munich Summit really did was strip away any pretense that NATO was serious about peacefully coexisting with a powerful, sovereign Russian nation. A truly defensive alliance would have readily embraced such an outcome. NATO, it is now clear, is anything but.

NATO has been exposed as little more than a component of American global power projection, providing supplementary military and political backing for an American empire defined by the “rules-based international order” premised on sustained US military and economic supremacy. Keeping America on top, however, is proving to be a bridge too far, largely because the American empire itself is crumbling at its foundations, struggling economically to sustain the so-called “American Dream” and politically to keep alive the flawed promise of American democracy which underpins the very image the US seeks to promote abroad. The extent that the US can function with a modicum of credibility in the international arena today is determined purely by the level of “buy in” by the rest of the world to the golden idol that is the “rules-based international order.”

While the US has been able to strong-arm both NATO and its economic doppelganger, the G7, into actively promoting the “Rules based international order,” Russia and China have come together to create an alternative world view.

That is international law, premised on the concepts enshrined in the United Nations Charter.

The G7 declared that the BRICS economic forum, comprised of nations who are more aligned with a “law-based” world order, and not a US-dominated “rules-based” one, represents the greatest threat to its relevance on the world stage. NATO, likewise, has declared that the Russian and Chinese challenge to the “rules-based international order” represents a major threat to NATO’s core values, prompting an expansion of NATO’s reach into the Pacific as a counter.

In short, NATO (together with the G7 group) is declaring war against the principles of international law that are encapsulated in the United Nations Charter. At its Madrid Summit, NATO has made it clear that it’s ready to shed blood to defend a legacy whose legitimacy exists only among the collective imaginations of its members. And not all of them, either.

The goal of the rest of the world now needs to be to seek to minimize the damage done by this beast and find a way to dispose of it before it can do any more harm to the global community.

You’re either with us or you’re a “systemic challenge”

Is NATO’s Northern Expansion Really A Major Defeat For Russia?

The Road to Armageddon Is Being Set in Stone

War With the Russian Federation