HOME / WORLD / For the US, ‘arms control’ is just another bludgeon and pulling out of the Open Skies Treaty proves it 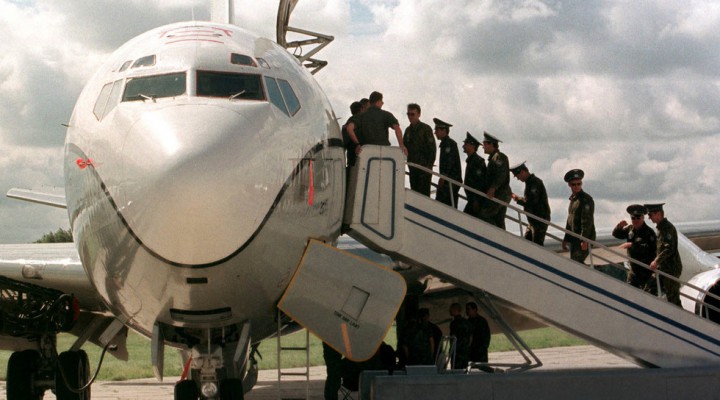 Donald Trump’s precipitous withdrawal from major arms control agreements indicates the US is more interested in gaining unilateral advantage than actual arms control. Can Joe Biden turn this around? Unlikely.

The withdrawal from the Open Skies Treaty on November 22 is just the latest in a series of departures on the part of the US from arms control agreements that has many in the world questioning not only its commitment to verifiable disarmament but also its reliability as a negotiating partner.

Arms control as an institution came into vogue during the height of the Cold War, when the strategic nuclear forces of the US and the Soviet Union were seen by both parties as threatening both (threats to their) their respective national survival, as well as the survival of the entire planet.

Initial agreements, such as the Strategic Arms Limitations Talks, or SALT, sought to place a limit on the number of nuclear weapons delivery systems each side could deploy. Later agreements, such as the Intermediate Nuclear Forces (INF) treaty and the Strategic Arms Reduction Treaty (START) resulted in their reduction. These later agreements also incorporated extensive compliance verification measures, including on-site inspections.

There is no shortage of national self-interest when it comes to the negotiation of any treaty or agreement which places limitations on the means of self defense available to a nation, and the US, Russia and any other country entering into such an agreement has every right to seek as much advantage as the other parties are willing to yield. However, once the negotiations have ceased and a final document has been signed (and, if necessary, ratified), then both the intent and letter of the agreement is sacrosanct.

Given the nature of the beast, most agreements allow for a mechanism where disputes over implementation and compliance can be raised and resolved without putting at risk the underlying agreement itself. Likewise, most agreements contain provisions which allow the parties to withdraw if its interests are no longer being served.

The US has a sordid history of using the multi-lateral disarmament agreements overseen by the United Nations for its own unilateral benefit. The decades-long effort to rid Iraq of its weapons of mass destruction under the auspices of the United Nations Special Commission (UNSCOM) ended up being hijacked by the US as a means of regime change via disarmament. Likewise, the efforts undertaken by the Organization for the Prohibition of Chemical Weapons (OPCW) to verifiably dismantle Syria’s chemical weapons capability has, under US pressure, morphed into little more than a vehicle for which to enable the so-called Syrian opposition to conduct false flag attacks which are then blamed on the Syrian government as a means of justifying US-led military action.

Regarding Iran, the US has used the International Atomic Energy Agency (IAEA) as a vehicle to undermine the theocratic regime in the Islamic Republic of Iran by fabricating information about a military dimension to Tehran’s demonstrably peaceful nuclear program to justify stringent sanctions that have placed a veritable boot on the neck of the Iranian economy. When the initial program of sanctions failed to halt Iran’s work on enrichment, the US led the way for the negotiation of the Joint Comprehensive Plan of Action (the JCPOA, or Iran nuclear agreement) which saw sanctions lifted in exchange for Iran agreeing to subject its nuclear program to certain restrictions and intensive monitoring inspections.

The JCPOA was negotiated by President Barack Obama and came into force during his tenure. However, the agreement was not subject to Senate ratification, and as such existed only under the authority of an executive order which, when Obama left office in 2017, was then placed under the direct authority of President Donald Trump, and led to his withdrawal from it in May 2018.

The ability of the US to manipulate these multi-lateral arms control agreements stems largely from the reality that the agreements in question are unilateral in their application, meaning that there is no reciprocity involved. Iran, Iraq and Syria all were compelled, in one way or another, to agree to disarmament measures which had outside parties intruding on their sovereignty to implement arms control measures which were unilateral in their application. This lack of reciprocity is further compounded when combined with the dominant position enjoyed by the US in the Security Council of the United Nations, whose authority underpins the respective disarmament mandates being pursued by UNSCOM, the OPCW and the IAEA.

If you can’t bend it, break it

With Russia, the opportunity for such abuse is limited due to the issue of reciprocity, both in terms of the negotiated instrument (a treaty), and the means of implementation (i.e., inspections.) Unlike the disarmament mandates imposed on Iran, Iraq and Syria, where the greater good of the world community trumped whatever national interest those nations attached to their proscribed programs, the arms control agreements negotiated between the US and the Soviet Union/Russia were done for the mutual benefit of both parties.

Without exception, the US has, over the course of the past two decades, abused its treaty relationship with Russia for its own self-interest. The first treaty to suffer such a fate was the Anti-Ballistic Missile Systems Treaty (ABM), which President George W. Bush withdrew from in 2002. The ABM treaty limited the scope and scale of any prospective missile defense system, in theory making both parties extremely vulnerable to nuclear attack, and thereby invoking the aptly named doctrine of “mutually assured destruction,” or MAD.

The US claimed it was compelled to withdraw from the ABM treaty so it could develop defenses against so-called “rogue nations” such as North Korea and Iran. Russia always believed that US missile defenses could be redirected in a manner which threatened Russian strategic nuclear forces, thereby disrupting the delicate balance of nuclear power that had constrained either side from employing nuclear weapons. Russia warned the US that any developments in ballistic missile defense that threatened Russia’s nuclear deterrent force would force Russia to withdraw from any strategic arms reduction treaty that may exist between the two nations.

Next, in August 2019, the US withdrew from the INF treaty, citing the existence of Chinese intermediate-range missiles not covered by the treaty (China was not a signatory) as representing an unacceptable threat to the US so long as the treaty prohibited US possession of similar weapons. The next treaty on the chopping block was the Open Skies Treaty, which provided for the overflight of signatory nations by specially equipped reconnaissance aircraft of the other parties. As was the case with the INF treaty, the US claimed Russian non-compliance made the treaty unworkable (in both cases, the US claims never went beyond simple allegation – no direct evidence was ever put forward to document the substance of the alleged violations).

The administration of President Trump has been playing a cat-and-mouse game of negotiations with Russia over the last remaining arms control agreement in place between these two nations, the New START treaty. This treaty is scheduled to expire of February 5, 2021. The treaty provisions allow for an automatic five-year extension if both parties agree. While Russia has indicated that such an agreement is, in its opinion, in the best interests of both the US and Russia, the Trump administration has sought to pressure Russia into adopting restrictions outside the framework of the existing treaty before any extension could be agreed to. Russia has rejected such efforts and, given Trump’s failed bid for reelection, has been looking to the prospects of extending New START once a Biden administration assumes power on January 20, 2021.

But even here the US inability to remain faithful to its undertakings regarding arms control has proven to be its undoing. The November 17 test of a Standard Missile-3 (SM-3) Block IIA missile fired by a US Navy destroyer to shoot down an ICBM-like target could complicate, and even prove fatal to, any effort by a Biden administration to breathe new life into New START. Russia has taken umbrage over what it claimed were past US assurances that the SM-3 missile was not technically capable of intercepting an ICBM.

The test of the SM-3 missile in an anti-ICBM configuration places at risk not only a potential extension of New START but also any future arms reduction agreement that might be negotiated with the US. Even if Russia does not decide to terminate the New START treaty, there will be little incentive to agree to any future limitations on its strategic nuclear weapons in the face of the threat posed by the SM-3. Moreover, at some point in time Russia, together with China and any other nation engaged in arms control-related discussions with the US, must question the value of engaging with a partner whose history of compliance to both the letter and intent of any disarmament agreement has been so abysmally poor.

0 thoughts on “For the US, ‘arms control’ is just another bludgeon and pulling out of the Open Skies Treaty proves it”