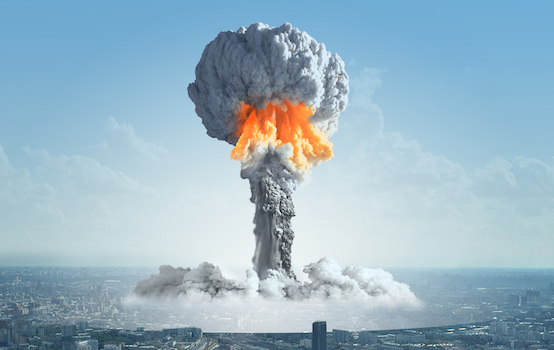 He said he could destroy Afghanistan but was signaling elsewhere. The scary part is there’s already a plan.

On Monday during a press conference between Donald Trump and Pakistani Prime Minister Imran Khan, Trump spoke rather casually of having reviewed plans to annihilate Afghanistan.

Trump’s seemingly blasé reference to a hypothetical mass murder on a scope and scale never seen in the history of mankind (it took Nazi Germany more than four years to kill six million Jews) was stunning. We know, given the state of play in Afghanistan, that it will never happen. But it wasn’t offhand. Such a policy of total destruction could also be seen as applying to Iran, and the potential for the use of nuclear weapons in the event of a U.S.-Iranian conflict is far from hypothetical. He knew exactly what he was doing.

There is a tendency among observers of the Trump White House to be dismissive of the daily barrage of outlandish statements and tweets. Reporters who cover him have grown so inured to this endless stream of hyperbole that they forget that this man is the commander in chief of the greatest military force in history, possessive of enough nuclear firepower to destroy the world a hundred times over. In an era where tweets have become a forum for the expression of policy, it is also easy to forget that the traditional forms of policy expression, such as the 2018 Nuclear Posture Review (NPR), continue to exist, and hold actual meaning.

Achieving a balance between “the lowest level of damage possible” and “the best achievable terms” for the U.S. and its allies is not something Washington has shown a propensity for achieving—one only need look at the devastation visited upon Kobani, Mosul, and Raqqa in the struggle against the Islamic State in Iraq and Syria. That the U.S. would opt to level entire cities in order to defeat lightly armed insurgents possessing zero strategic capacity speaks volumes about the calculus behind any notion of “balance.” When one factors in the destructive power of modern nuclear weapons, it becomes clear that “the lowest level of damage possible” is an absurd standard that literally has no meaning.

As such, the question becomes at what threshold does the employment of the U.S. nuclear enterprise become likely. First and foremost, the ongoing conflict in Afghanistan does not remotely enter into any equation regarding the potential employment of nuclear weapons by the United States. U.S. military officers ostensibly operate in strict adherence to the Vienna Convention and the Additional Protocols, as it deals with issues of reciprocity during armed conflict. The International Court of Justice has determined that the use of nuclear weapons is incompatible with the laws of war.

However, U.S. and NATO military planners have carved out an exception, noting that once a conflict begins, traditional theories of humanitarianism and international law will become moot. But this exception would never apply to the current situation in Afghanistan, which makes a lie of President Trump’s claiming to have reviewed plans for such. There is simply no chance of America’s military leadership ever allowing such plans to be considered, let alone drawn up and prepared for implementation.

But Trump is clearly using Afghanistan to signal a very different conflict, one between the U.S. and Iran. Amid rising tensions between the two nations, Trump, during the same press conference where he threatened Afghanistan with nuclear annihilation, said of the situation with Iran, “We’re ready for the absolute worst.” Trying to define what Trump meant by “absolute worst” doesn’t take much imagination. Speaking to reporterson June 26, 2019, Trump stated that any war with Iran “wouldn’t last very long, I can tell you that. It would not last very long. I’m not talking boots on ground…or sending a million soldiers.”

This statement was made a day after Trump tweeted out similarly threatening words, declaring, “Any attack by Iran on anything American will be met with great and overwhelming force. In some areas, overwhelming will mean obliteration.” There can be no doubt in any rational observer’s mind that the president was, and is, speaking about the use of nuclear weapons.

Unlike the situation vis-à-vis Afghanistan, where the mere consideration of using nuclear weapons on the scope and scale needed to kill 10 million people is inconceivable, the situation vis-à-vis Iran is a far different scenario. The 2018 NPR speaks specifically of the role played by U.S. nuclear deterrence in confronting Iran on several potential points of conflict.

First and foremost, the NPR states that “Iran retains the technological capability and much of the capacity necessary to develop a nuclear weapon within one year of a decision to do so.” It should be noted that the 2018 NPR was written and published while the U.S. was a member of the Joint Comprehensive Program of Action (or JCPOA, popularly known as the Iran nuclear agreement). The U.S. withdrew from the JCPOA in May 2018, and since that time has engaged in a policy of “maximum pressure” against Iran to compel it to enter new negotiations about limiting its nuclear program. Rather than accede to this pressure, Iran has increased its nuclear capabilities beyond that permitted by the JCPOA, meaning that the one-year threshold mentioned in the 2018 NPR has been shortened considerably.

The U.S. is also concerned about nuclear proliferation and “denying terrorists access to finished weapons, material, or expertise.” Iran has been declared a state sponsor of terrorism, and its Revolutionary Guard Command, which plays a critical role in its nuclear program, a terrorist entity. The 2018 NPR declares that “Preventing the illicit acquisition of a nuclear weapon, nuclear materials, or related technology and expertise by a violent extremist organization is a significant U.S. national security priority.” It notes that the acquisition of nuclear weapons by “rogue states” such as Iran “that possess nuclear weapons or the materials, technology, and knowledge required to make them” increases the likelihood that terrorist organizations will acquire them. “Further,” the NPR notes, “given the nature of terrorist ideologies, we must assume that they would employ a nuclear weapon were they to acquire one.”

It doesn’t matter that Iran isn’t pursuing a nuclear weapon today, or that the designation of both Iran and the Iranian Revolutionary Guard Command as terrorist entities by the U.S. is an entirely political move devoid of reality. The fact remains that, when it comes to the issue of U.S. nuclear deterrence policy, the theoretical ability and intent on the part of Iran to both acquire nuclear weapons and share this technology with terrorist organizations has been solidified in American policy. As such, any declaration by the U.S. that deterrence has failed creates the very “extreme situation” under which Washington can consider the employment of nuclear weapons  “to defend the vital interests of the United States, its allies, and partners.”

It would take the United States, using nuclear weapons, less than a week to destroy Iran’s nuclear infrastructure and eliminate their government and ancillary organizations, including the Iranian Revolutionary Guard Command. The numbers of Iranians who would be killed in such an attack could very well exceed 10 million. President Trump understood that his reference to annihilating Afghanistan was nonsensical. But his willingness to use nuclear weapons to achieve a short, decisive military victory was not.

The fact that the United States has defined conditions that would legitimize the use of nuclear weapons against Iran should frighten all Americans. The fact that the current crisis could meet these conditions should alarm the entire world. Under normal circumstances, the American people could expect a rational president to walk away from any situation that needlessly invited the specter of nuclear war. That President Trump so easily invokes his powers amid critical international tensions should give us serious pause.

0 thoughts on “Did Trump Just Threaten to Attack Iran With Nukes?”