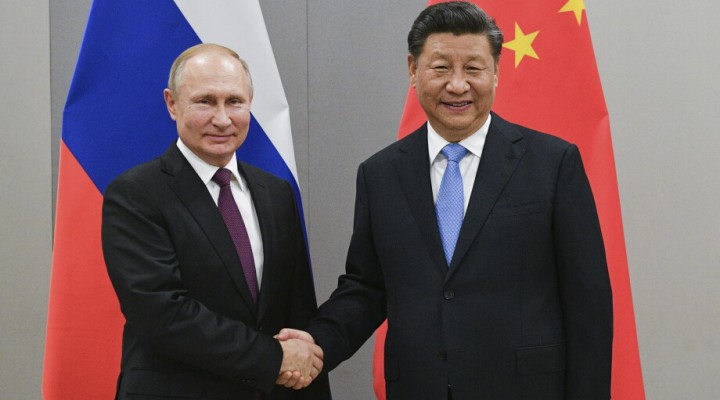 The US has singled out both Russia and China as presenting ideological, economic, and geopolitical threats to the US-led, rules-based international order that has governed global interaction since World War II. While Russia and China have historically eschewed formalizing either an economic or military alliance, the impact of the US-led campaign against both has led to closer economic ties, and the formalization of military cooperation. The result is the creation of the very Russian-Sino partnership the US had long sought to prevent, a self-fulfilling prophecy that is all but irreversible given the fragile, inconsistent nature of US and European policy making when confronting the longevity and consistency of Russian-Sino rule.

On Nov. 23, Russian Defense Minister Sergei Shoigu, in a video call with his Chinese counterpart Wei Fenghe, signed a “roadmap” for Russian-Chinese military cooperation for 2021-25. While the document fell far short of an official alliance, it did create a framework that builds on a considerable record of joint military exercises and activities that have brought these two nations closer than at any time in the past six decades.

Perhaps most telling are the conditions that prompted the cooperation agreement in the first place — frequent sorties, including 30 flown in November alone, by US nuclear-capable B-52 bombers near the Russian border. Shoigu highlighted that in the recent “Global Thunder” exercise, “10 [US] strategic bombers practiced the scenario of using nuclear weapons against Russia practically simultaneously from the western and eastern directions,” coming as close as 12 miles to the Russian border. Shoigu also accused them of practicing the launching of cruise missiles, and noted that such actions threatened both Russia and China.

The irony is that such cooperation between Russia and China was all but unthinkable before the collapse of the Soviet Union in 1991. During the Soviet era, China was often seen as an ideological competitor and intense border skirmishes broke out in the late 1960’s. Exploiting this tension was a centerpiece of President Richard Nixon’s China policy, which led to the warming of US relations with China and the economic reforms that led to China’s dominant position in the world today.

Indeed, the strength of China’s economy, and the relative weakness of Russia’s, has been seen as the greatest roadblock to formation of any formal economic alliance, alongside Russia’s long paranoia over China’s potential to economically dominate Russia’s thinly populated Far East region. Trade between Russia and China exceeds $100 billion annually, with much of that from a 2014 gas supply agreement valued at over $400 billion. However, continued Russian reticence over creating a formal legal structure for economic cooperation beyond that has frustrated China, which would like Russia’s cooperation in expanding the Belt and Road Initiative (BRI) into Central Asia and Russia itself.

The past Russian-Sino military connection was primarily economic in nature, as well, with Russia providing top-of-the-line military equipment and China reciprocating by making available high technology that had otherwise been unavailable due to economic sanctions imposed on Russia following its 2014 annexation of Crimea. In the past year, however, Russia and China have expanded their military-on-military cooperation to include large-scale joint exercises where Russian and Chinese troops worked under a unified command, utilizing joint operational procedures — in short, preparing to fight side-by-side against a common foe using a common military doctrine. This sort of joint military cooperation has normally been the exclusive purview of formal military alliances, such as Nato and the former Warsaw Pact.

The idea of Russia and China entering into a formal military alliance should send shudders through all Western nations, which have over the past decade supported the expansion of Nato as a means of containing Russia, and the expansion of Nato into the Pacific — while creating quasi-military alliances such as “the Quad” (the US, Australia, India, and Japan) and the recently constituted Australia-UK-US (Aukus) alliance.

As recent events highlight, Nato was virtually impotent in the face of Russia’s mobilization of 100,000 troops along its border with Ukraine in April, and neither “the Quad” nor Aukus have demonstrated the collective capacity to halt Chinese expansion in the South China Sea or deter aggressive Chinese maneuvers off Taiwan. It’s possible that Western militaries could deal with Russia or China individually, but a Russian-Sino alliance that treated an attack against one as an attack against the other would stymie any conventional military activity by any existing US-led military alliance.

While Russia and China have in the past rejected the possibility of a formal military alliance, in 2020 Russian President Vladimir Putin declared that such a prospect could not be ruled out. This has seen the US seeking to build a coalition of “liberal democracies” to counter what the US calls “the forces of autocracy,” led by Russia and China, and efforts by US President Joe Biden to revive a Cold War-like ideological flavor to the US’ increasingly dysfunctional relationship with not only Russia and China, but also the rest of the world, including much of Europe.

The reinvigoration of the so-called “rules-based international order” has seen pushback not just from targeted nations like China, but also from long-time allies. Germany has balked at US efforts to halt Russia’s Nord Stream 2 pipeline, and France has openly questioned European overreliance on the US for its security.

The fact is that when the US foisted the rules-based international order on the world in the aftermath of World War II, it was the world’s foremost democracy, with both a military and an economy second to none. Today, the US is a declining power. Its military, while still impressive, is no longer dominant.

The same holds true on the economic front. Russia is an energy superpower, and China has not only surpassed the US in manufacturing, but recently took over as the world’s largest economy by some calculations. In a decade, China is expected to take the top position from the US even in terms of nominal GDP. In the ideological struggle between US-inspired “democracy” and Sino-Russian “autocracy,” the US, faced with its own considerable domestic political dysfunction, is unlikely to rally many nations to its calling. In any case, Russia and China have opted out of the ideological front, and are instead focused on the economic and geopolitical aspects of competition.

China’s recent exploitation of the US withdrawal from the Trans-Pacific Partnership (TPP) is but one example of this. China immediately filled the vacuum created by US posturing to create the world’s largest free-trade association, the Regional Comprehensive Economic Partnership, or RCEP. Moreover, US missteps in the Middle East opened the door for Russia’s re-emergence as a regional power in the Mediterranean, with power projection in both Syria and Libya. And the precipitous US withdrawal from Afghanistan paved the way for the Russian- and Chinese-led Shanghai Cooperation Organization to forge a pan-Eurasian economic and political bloc from the ruins of US military misadventure.

Current Sino-Russian military cooperation is more the result of a self-fulfilling prophesy for the US-led West, which engaged in deliberatively provocative military and economic policies against both China and Russia, while exaggerating the military threats they posed. Now the West’s worst nightmare has become reality. Russia and China have taken a critical first step toward the kind of formal military alliance no one — not even Russia and China — wanted. The “Axis of Autocracy” has become a reality.

Compounding the West’s problems is the genuine friendship that exists between Vladimir Putin and Chinese President Xi Jinping. The two have met 30 times, and their friendship is not about to go away anytime soon. Putin, 69, will likely remain in power at least until 2036, while Xi, 68, is positioning himself to become “president for life.” None of the US or European leaders has the tenure or ruling potential of either Putin or Xi. In the battle of “democracy” versus “autocracy,” this fact alone virtually guarantees a Russian-Chinese victory.

Biden’s foreign policy is built on one big lie

0 thoughts on “Axis of Autocracy: The West’s Self-Fulfilling Prophecy”