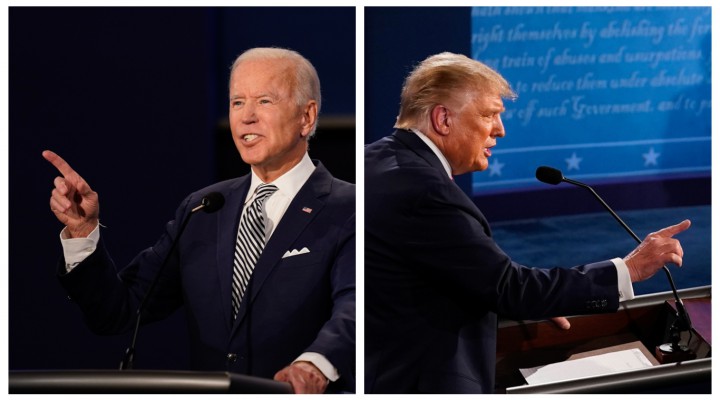 Americans are taking to social media to express disdain over the first presidential debate, with one poll finding that 69% of viewers felt annoyed by it and only 17 percent felt informed.

MPN- Tuesday night’s much anticipated presidential debate between incumbent Donald Trump and Democratic challenger Joe Biden drew the attention of tens of millions around the world. But few appeared satisfied or enlightened after watching it. Although it touched on many serious topics, including the Supreme Court, climate change, policing, and the coronavirus pandemic, little of any substance was actually said by either man, the event descending into a farcical bickering battle. Biden repeatedly attacked Trump’s character. “You’re the worst president America has ever had. Come on,” he said, describing the president as a “clown” and a “racist” and telling him to “shut up.” Trump, meanwhile, constantly interrupted his opponent, attacking Biden’s intelligence and accusing him of being in thrall to the radical left on healthcare, a charge he vehemently denied (despite the fact that a socialist-style healthcare plan is highly popular among Americans).

Few on social media appeared impressed by the spectacle, or able to draw meaningful policy distinctions between the two from the debate. “I don’t think the 3 minute summary clips of the debate tomorrow are going to capture just how much despair you feel watching it all,” was a common sentiment. Andrew Yang, a candidate for the Democratic nomination who ran on the concept of universal basic income, reacted by saying, “Everyone who watched that debate deserves $1,000 a month.” Former MintPress writer Whitney Webb described the event as a “shit show” consisting of “two old, grumpy career con artists yelling at each other.” Green Party presidential candidate Howie Hawkins noted that the “debate” was actually a carefully choreographed show where both parties had vetoes over moderators. “This isn’t a debate, it’s a farce,” he said.

That debate was the worst thing I've ever seen & I was in The Star Wars Holiday Special.

Surprisingly, the reaction from the press was remarkably similar. Political commentator Andrew Sullivan described it as the lowest point in American political culture in his lifetime. “That was a hot mess inside a dumpster fire inside a train wreck. That was the worst debate I have ever seen. In fact, it wasn’t even a debate, it was a disgrace. The American people lost tonight,” said CNN anchor Jake Tapper, live on television, with countless talking heads on the network suggesting that was the final debate and all others should be canceled.

A snap NBC/YouGov poll found that, of Americans who watched the debate, 69 percent felt annoyed by it, but only 17 percent were informed. Less than one in three were entertained, and one in five felt pessimistic about the future after watching. By a figure of 83-17, viewers felt the debate was negative, rather than positive.

at least i get a free lobotomy tonight

Despite the lack of substance, a few notable moments did occur. Moderator Chris Wallace repeatedly pressed Trump to condemn white nationalists groups like the Proud Boys. The president refused, instead telling them to “stand back and stand by,” a comment that sounds more like a general ordering his troops than a condemnation. He quickly deflected and attacked Antifa, insisting that they were the real problem. Even when Wallace tried to change the subject, Trump interrupted him twice to express his distaste for the leftist anti-fascist movement. Massachusetts senator Ed Markey commented that “Trump won’t condemn white supremacists because he is one.”

The president also expressed his serious concern over the upcoming “fraudulent election.” “I’m encouraging my supporters to go into the polls and watch very carefully,” he said when asked if he would respect the results. “If I see tens of thousands of ballots being manipulated, I can’t go along with that,” he added.

that utter shitshow of a "debate" between two geriatric racist rapists who barely possess object permanence was the perfect symbolic representation of a corrupt, decrepit, dying empire

Televised presidential debates have become a centerpiece of American life for the past sixty years since 66.4 million people watched the first Kennedy-Nixon debate in 1960. Americans consistently agree that they help them make a choice in who to vote for. In 2016, for instance, nearly two-thirds of the country said they found them useful in deciding which party to choose. Yet the very format itself, with candidates able only to discuss or present issues in small, quotable sound bites might be helping to dumb down the process altogether. Grand ideas usually need more than one minute to be explained properly. An increasing number of people are questioning the purpose of the events. With last night’s disaster, their case will be made stronger.