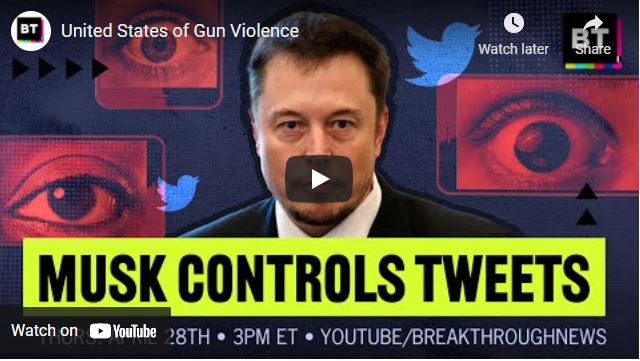 From serial killers to school shooters, what explains America’s one-of-a-kind culture of violence?

What’s behind Biden’s bellicose posture in Asia? Were his Taiwan comments really a “gaffe?”

Dr. Ken Hammond joins BT to help us understand the reality behind the rhetoric.

The upcoming election in Colombia could be momentous. Journalist @ZoPepperC joins BT to discuss the impact of a left victory for the first time in the modern era.

Women’s rights are under enormous attack with a Supreme Court decision looming that could overturn Roe v. Wade.

Karina Garcia of @pslweb  says “now is the time to fight.”

“There’s something deeper that’s wrong with American society & culture contributing to this. Everyone in Lebanon has guns. There are guns all over Yemen & Syria, but they don’t have these bizarre senseless mass shootings.” –
@RaniaKhalek

West’s Support for Extremism “Blows Back” in New York Shooting

Is White Genocide in Our Future?

Mass Shootings and Political Misuse of Them Have Unintended Consequences

One thought on “United States of Gun Violence”