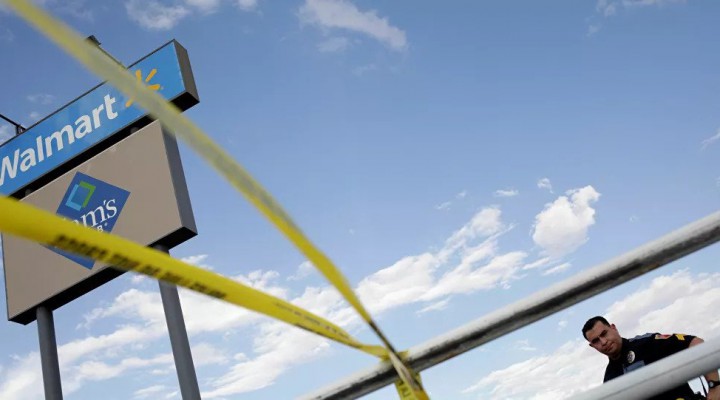 What was President Trump thinking of when he posed with a baby orphaned by the El Paso massacre? It’s such a horrifying, heartrending story. And yet here was Trump beaming a smile, giving the thumps up.

The photo was taken while Donald Trump and his wife Melania were visiting survivors of the mass shooting last week. Melania is seen holding the two-month-old baby boy whose Latino mother and father were shot dead in the atrocity, along with 20 other victims, many of whom were also Latino.

Tragically, the infant survived because his parents bravely shielded him with their bodies as the gunman sprayed the supermarket with an assault rifle.

When Trump flew to El Paso to visit the survivors in hospital many of them reportedly refused to meet the president. They believe that Trump’s anti-immigrant rhetoric and policies have fueled violence towards Latinos.

Fair enough, so maybe Trump was happy to hear that. Maybe in a moment of lightness amid such tragedy, Donald and Melania wanted to appear strong and supportive of the grieving family.

Still, the photo looks in bad taste. At best, it looks like a photo-op exploiting a baby whose parents had just been slaughtered days before. The insensitivity is mind-numbing. Where were Trump’s media advisors? Where was Trump’s basic decency and common sense to avoid potential controversy? Surely, he must have known that critics would jump on the opportunity to impugn him?

The gunman, who is in custody, has told police officers that he deliberately targeted Latinos when he launched his murderous attack. A manifesto published online by the self-declared white supremacist just before he went on his shooting spree is littered with the same rhetoric often espoused by Trump, referring to immigrants from Mexico as an “invasion” of the United States.

Following the mass murder, Trump condemned the atrocity, as well as racism, bigotry and white supremacism. His daughter and political aide, Ivanka, has also denounced the “evil” of white nationalist terrorism.

Nevertheless, this president can’t so easily dissociate himself from the horror of El Paso and several other recent incidents of racial terrorism.

Democrat opponents have all roundly accused Trump of inciting white supremacists and Neo-Nazis by his continual derogatory language inveighing against Latino immigrants and other ethnic minorities. Trump has been censured for deliberately stoking racism.

At a recent rally in Florida, Trump even whipped up the crowd with xenophobia to the boiling point where a person shouted out “shoot them!”. A moment before the outburst, Trump had asked the question: “What do you do with them [illegal immigrants]?

Rather than rebuking the crowd, Trump joked, “You can’t do that stuff, only in the Panhandle.”

This is the dangerous and mercurial context American politics has slid into. A President is playing on insecurities for electoral gain, sowing thoughts of violence, almost appearing to endorse violence, and then when a calamity happens, he vocalises a seeming condemnation.

That’s why this photograph of Trump posing with the orphaned baby of the El Paso mass shooting is appalling.

That’s the benign interpretation. Others are seeing a darker, far more sinister impression. American political analyst Randy Martin claims that the imagery is loaded with malign messaging to the growing number of white supremacists and Neo-Nazis who see in Trump a political leader that is “on their side”.

That’s the truly scary thing. We may give Trump the benefit of doubt, and say his photo-op was ill-advised PR; it was stupid and insensitive.

But given the climate of racial hatred, ignorance and fear in the US, given the prevalence of heavy weaponry, given the proliferation of Neo-Nazi networks among American white nationalists, it is horrifying to think what nefarious forces Trump is unleashing, wittingly or not.

As one former US Neo-Nazi remarked in a recent interview about the rise of white supremacism and Trump’s insidious influence: “He’s very good at kicking little buckets of gasoline over sparks of fire that already exist.”

The Survival of the Fittest

Mass Shootings and Political Misuse of Them Have Unintended Consequences