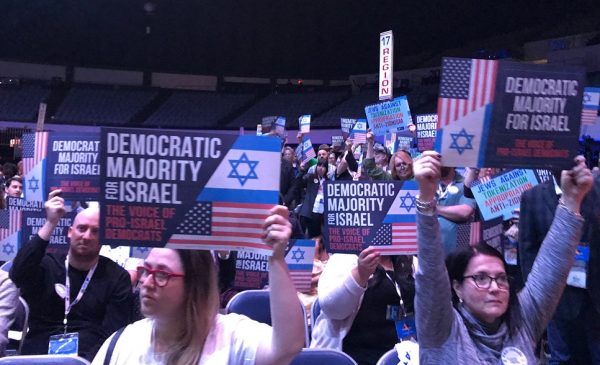 There are two recent stories that involve the arrogance of the Jewish community in the United States. The first involves a lobbying group in Washington and the second concerns a hospital in New York City. It has often been observed that some Jews of the Alan Dershowitz persuasion boast about how powerful Jews are in the U.S. When challenged, they would argue that the Judaization of American culture and politics has been a good thing, bringing with it liberal values that have particularly benefited other minority groups in particular. What is not discussed much is the quid pro quo, whereby Jews reward themselves for their goodness by allocating to the tribe top positions in high profile and richly remunerated professions where they are hugely overrepresented.

Much of the Jewish self-congratulation takes place behind the scenes, at events that are for Jews only or in discussions inside the Jewish media, but of late the empowering of Zionist and Jewish interests by President Donald Trump and the success in shutting down criticism of Israel has served to embolden those who like to boast of the tribe’s accomplishments. The latest bit of bragging rights in respect to Jewish power in the U.S. belongs to a group called the Democratic Majority for Israel (DMFI). The DMFI is a registered political action committee (PAC) that lobbies on behalf of the Jewish state. It was organized in 2019 by Democratic Party activists to counter what was perceived to be pro-Palestinian sentiment within the party’s progressive wing.

In 2016 the Democratic Party dodged the bullet on Israel by a cheap maneuver which included not permitting a floor vote on a proposed platform plank that would have expressed support for Palestinian statehood. Opinion polls do indeed suggest that half of Democrats who are aware of the Boycott, Divestment and Sanction (BDS) movement approve of it. Criminalizing BDS has been a principal target of Jewish groups in the U.S., to include both AIPAC and DMFI.

The DMFI has particularly chosen to go after Senator Bernie Sanders who, more than anyone running for the nomination to run for president, has emphasized the suffering of the Palestinians and has suggested withholding money from Israel until its behavior improves. On the morning after Sanders withdrew from the race DMFI president Mark Mellman sent out an email to supporters expressing his pleasure over the result. He also took some credit for the outcome “Bernie Sanders suspended his campaign for president. That’s a big victory — one you helped bring about.”

Mellman also reminded his associates that the victory was only a first step in making sure that the Democratic Party platform continues to be pro-Israel, writing that “Extreme groups aligned with Sanders, as well as some of his top surrogates — including Congresswomen Rashida Tlaib and Ilhan Omar — have publicly declared an effort to make the platform anti-Israel. As a career political professional, I will tell you that if Democrats adopt an anti-Israel platform this year, the vocabulary, views, and votes of politicians will shift against us dramatically. We simply can’t afford to lose this battle.”

The destruction of Bernie Sanders by the Democratic Party establishment, to include DMFI, is eerily reminiscent of what was done to Jeremy Corbyn by similar pro-Israel groups in Britain. Mellman in effect admits that he has interfered with the electoral process of the Democratic Party on behalf of a foreign government, but no one is disturbed by it. That he is actively engaged in politicking from inside the Democratic tent to destroy one candidate purely because he is mistrusted by a foreign government appears to bother no one in the mainstream media, nor on the Democratic National Committee. Nor has the Treasury Department required Mellman to register under the terms of the Foreign Agent Registration Act (FARA) of 1938. In fact, no pro-Israel organization has ever been required to register under FARA in spite of the fact that they are clearly visible and quite open in their advocacy.

The other story is somewhat more bizarre and it involves Jews in Brooklyn receiving priority treatment at a taxpayer funded hospital. Maimonides Medical Center is Brooklyn’s largest hospital, and, in spite of the name, it is non-sectarian. Brooklyn is one of the epicenters of coronavirus and many of the patients are Hasidic Jews who refuse to comply with the government orders to stay at home and not attend large gatherings. A number of recent weddings and other celebrations have been attended by hundreds of people in New York and New Jersey, leading to sharp jumps in positive tests among the participants as well as among other local residents. According to Deborah Lipstadt, Jews are unwilling to forego large gatherings that endanger them and the people around them due to the “Holocaust.”

New York City has an ultra-orthodox Jewish volunteer ambulance service called Hatzalah which is in part taxpayer funded and was founded due to “cultural differences” between extreme orthodox Jews and gentiles. Hatzalah has somehow managed to obtain 50 ventilators, which are used in the extreme cases of coronavirus to assist the patient’s breathing. It is projected that ventilators will be in short supply as the number of sick patients increases.

At Maimonides, Hatzalah has given the ventilators to the hospital but only under the condition that Jews will get first access to them. In cases where an elderly Jewish patient is dying and a gentile child might be able to recover using a ventilator, the Jew has to be allowed to retain his ventilator until he dies.

Jewish power is the real deal in the United States. It is well known in political circles that Israel interferes in U.S. politics more than any other country, though it is not considered safe to mention that fact if one is running for office. And it is also true that American Jewish organizations are active in that process, in this case working to eliminate a candidate for office solely because his views on Israel are considered to be suspect. And if you should happen to live in Brooklyn and become ill enough with coronavirus to need a ventilator, pray you don’t wind up in Maimonides Medical Center. Ventilators are Jewish-only.

0 thoughts on “The Arrogance of Zionist Power”