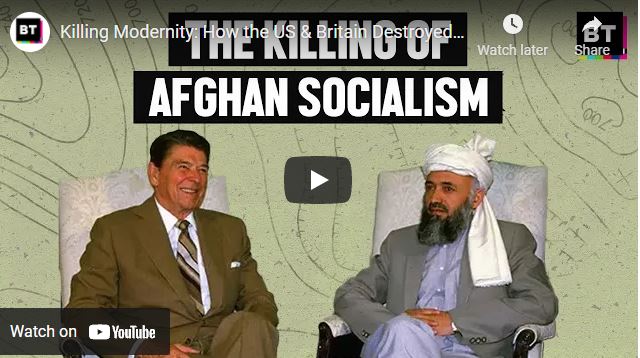 It’s been 20 years since the US invaded Afghanistan. As the US finally withdrew, Taliban control over Afghanistan has been portrayed as inevitable. But what happened to the other political forces in the country?

The war on Afghanistan didn’t really start in 2001. US meddling goes back to the 1970s and British meddling even further. Most people don’t know that there have been liberal, secular nationalist and communist Afghan foforces who tried to transform their country but were prevented from doing so by Western imperial powers who supported religious and tribal conservatives to maintain control.

To make sense of it all and to uncover some of this buried history, Rania Khalek was joined by Vijay Prashad, Executive Director of the Tricontinental Institute for Social Research and author of the book “Washington Bullets: A History of the CIA, Coups, and Assassinations.”

0:00 Intro
1:22 100 years of Western meddling in Afghanistan
7:10 When the CIA’s Mujahideen killed Afghan teachers to undermine communism
9:03 Why was mass literacy in Afghanistan such a threat?
11:25 Why so much opposition to liberalism and leftism in Afghanistan?
12:58 History of close ties between the Soviets and Afghanistan
16:07 The rise and fall of Afghan communism
20:50 Why & how did the Soviets intervene in Afghanistan?
26:01 How did the international left react to the CIA’s intervention in Afghanistan?
31:42 Would there have been a 9/11 without the US backing the mujahideen?
39:23 Taliban rule was NOT inevitable
46:59 Why did the US withdraw from Afghanistan now?
52:57 What should the left’s position on Afghanistan be today?

0 thoughts on “Killing Modernity: How the US & Britain Destroyed the Afghan Left, w/ Vijay Prashad”