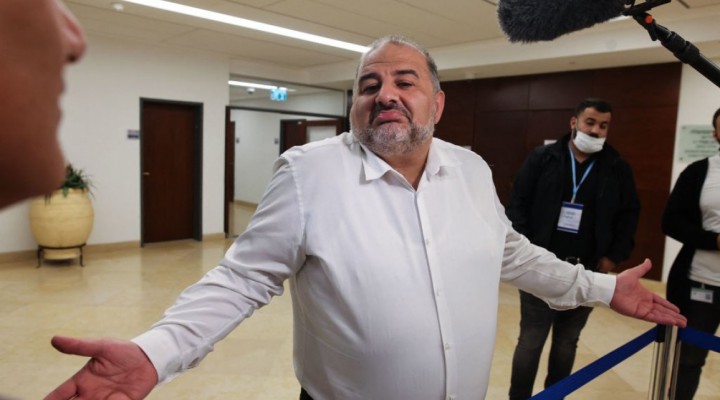 Mansour Abbas, Ra’am Party leader in the Israeli Knesset, portrays himself as a pragmatist by denying Israeli apartheid. But this pragmatism he proclaims is merely an extension of Israel’s exclusionary colonial politics, writes Ramona Wadi.

If last year the Israel human rights organisation B’Tselem made headline news over its designation of Israel as an apartheid state, this year’s report by Amnesty International which reached the same conclusion raised an even bigger furore internationally. Israel is scrambling to save its public image while remaining reassured by some governments’ reactions who outrightly rejected the reality of Israeli apartheid.

Palestinians have been asserting their experiences of apartheid long before the B’Tselem and Amnesty International report, to little avail because within the international community the Palestinian people exist only to perform a role in the humanitarian paradigm created by the UN.

Yet at a time when consistency is needed more than ever to hold Israel accountable for its international law violations, along comes Ra’am Party leader Mansour Abbas and his usual attempts to derail the Palestinian people’s slightest possibilities for justice and political rights.

“Abbas described his role as “trying to bridge the gaps.” However, as evidenced on other occasions, Abbas prefers to downplay the consequences of Israeli settler-colonisation”

This is not the first time that Abbas, who joined Israel Prime Minister Naftali Bennett’s coalition government, has spouted Israel’s colonial narrative against the Palestinian people. What Abbas and Israel describe as “pragmatism” is one Palestinian politician’s attempt to marginalise Palestinians further by rejecting their narrative from within the Israeli parliament.

Abbas described his role as “trying to bridge the gaps.” However, as evidenced on other occasions, Abbas prefers to downplay the consequences of Israeli settler-colonisation and to pitch forth suggestions on compromise while dismissing the need to focus on decolonisation and justice.

His reaction to Amnesty International’s report proved to be no exception. Instead of asserting the obvious – that Israel is an apartheid state as a result of its settler-colonial enterprise, Mansour Abbas became the most prominent Palestinian to openly espouse Israel’s narrative. Not even the Palestinian Authority (PA) has stooped so low.

Whereas the PA was swift to utilise the report either as further proof of Israel’s international law violations or else as the basis upon which the African Union should reconsider its acceptance of Israel as an observer state – a recent endeavour by the PA’s Prime Minister Mohammed Shtayyeh, Mansour Abbas’s rejection of compiled evidence proving Israel’s apartheid played directly into Israel’s normalisation of its violent roots and present manifestation.

The PA is keen to grab at international designations of Israel as an apartheid state because such occasions lend themselves to the International Criminal Court’s investigations which PA leader Mahmoud Abbas is under pressure to withdraw. While of course, Abbas will do anything to protect his standing, even if it means reversing the only recourse Palestinians have for a sliver of justice, the PA would not be caught denying Israeli apartheid at such a moment.

After all, as an actor in the international community’s illusory state-building of Palestine, Amnesty International’s report is perhaps the most influential tool the PA has at its disposal since Palestinian narratives do not particularly matter to the PA, having discredited them through its ongoing security coordination with Israel.

On the other hand, had Mansour Abbas accepted Amnesty International’s report, he would have had to explain his earlier statement in December 2020 affirming, with no introspection, Israel’s identity as a Jewish state which is in itself exclusive and therefore undemocratic. Israel’s identity is first and foremost European settler-colonial, and this should be the departure point for any analysis of how Israel came to declare itself a Jewish state as enshrined by its law, and apply apartheid policies and practices against the Palestinian people.

The rejection of Amnesty International’s apartheid designation is also a rejection of the Palestinian experience under Israel’s brutal, settler-colonial military occupation. It is only in Israeli media that Mansour Abbas is depicted as brave for not only compromising but rejecting his Palestinian roots as well as his history which, like that of other Palestinians, is imbued with Israel’s ethnic cleansing. Aligning with the oppressor is an act of cowardice and enticement of political gain. There is no genuine partnership, as some Israeli writers have opined, in forcing the Palestinian experience of apartheid to remain subjugated to Israel’s dominant narrative.

Mansour Abbas – head of the United Arab List, a Palestinian-Islamist political party that is part of the governing coalition in Israeli Knesset – has been condemned for reportedly accepting Israel as being a Jewish state 👇https://t.co/faKkvCpAL3

What Mansour Abbas has achieved is the equivalent of international governments pretending to clamour for Palestinian rights yet normalising Israel’s colonial origins, existence and policies. Only this time, coming from a Palestinian, Abbas’s words have bolstered Israel’s denial of apartheid.

Specific focus on Israel’s human rights violations without context is partly to blame for the entrenched apartheid practices Palestinians suffer daily. Displacement and demolitions are ensconced within their own paradigm, as are settler violence, colonial expansion, segregation, checkpoints and permits. To stave off criticism of Israel’s colonial violence, the UN preferred to focus on specific violations, thus breaking up the colonial structure Israel implemented and avoiding dealing with the fact that the international community legitimised and normalised Israel’s violence against the Palestinian people.

Mansour Abbas is promoting the same tactic. Looking at specifics without context, while refuting meticulous research that has the potential to shift international perspectives on Israel is an outright endorsement of Israel’s violence. Apartheid maintains the Israeli colonisation of Palestinian territory, it maintains the demographics which have allowed Israel to declare itself an exclusively Jewish state and divest Palestinians of their political rights. If Abbas had to point out specific instances of Israeli “discrimination”, where would he start from?

“Mansour Abbas keeps portraying himself as the Israeli government’s coveted pragmatist, but the pragmatism he proclaims is merely an extension of Zionist exclusionary colonial politics”

All the so-called “specific fields”, as Abbas ambiguously termed Israel’s violations against the Palestinian people, have affected the people’s daily lives. In particular, the absence of Palestinian freedom of movement, which is itself a derivative of Israel’s ethnic cleansing and dispossession of the Palestinian people, is one major factor that spills over to determine the segregation Israel created by its exclusivity to its Jewish settler-colonist society.

Perhaps Mansour Abbas would do well to remember that Palestinians have been calling for a single democratic state as an alternative to the defunct two-state compromise which also plays into Israeli apartheid.

By normalising Israeli colonialism and negating the Palestinian experience of apartheid as a derivative of Zionist settler colonialism, the Ra’am Party leader is promoting Israeli supremacy. Mansour Abbas keeps portraying himself as the Israeli government’s coveted pragmatist, but the pragmatism he proclaims is merely an extension of Zionist exclusionary colonial politics.