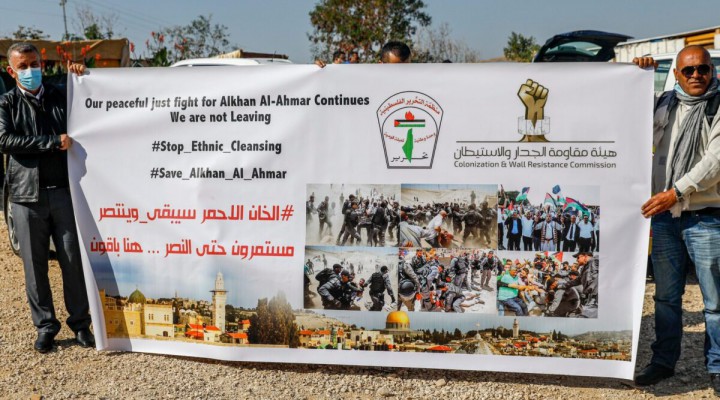 Israel has announced new plans for the village of Khan Al-Ahmar in the occupied West Bank, which has been demolished and rebuilt several times, and which attracted international attention in 2018 after the Israeli Supreme Court approved its destruction. For a brief period in 2019, Khan Al-Ahmar’s impending destruction was exploited by former Israeli Prime Minister Benjamin Netanyahu, who stated on several occasions that it would be preferable for the demolition to happen before the Israeli General Election. The International Criminal Court warned that the demolition of the village would constitute a war crime.

Despite the delays, however, Netanyahu’s statement that the destruction of Khan Al-Ahmar is an integral part of Israel’s colonial policy still rings true, as the apartheid state seeks territorial contiguity in the area. Under the recent proposal, the village will be destroyed and rebuilt 300 metres away. Unsurprisingly, the Palestinian villagers were not consulted about the plans.

Talk of Israeli annexation has been shelved since the Abraham Accords, with the government focused on de facto annexation to stave off international scrutiny. While it is Israel that holds the upper hand in territorial contiguity, Palestinians are being accused of embarking strategically upon a “take over” of land; their own land. The CEO of the Israeli NGO Regavim, Meir Destsch, pointed out its opposition to the proposed relocation of Khan Al-Ahmar: “The area in question, the Mishor Adumim area, is the most strategic, lying between Jerusalem and the Jordan Valley, Jericho and Ramallah. That’s why the place gets so much attention from the PA and the EU.”

However, the only attention that the Palestinian Authority and EU have spared for Khan Al-Ahmar has been sporadic, and usually in parallel with mainstream media attention. As such, Destsch’s claim that the Israeli Defence Ministry is playing into any purported Palestinian scheming is unfounded: “The strategic location is what draws this attention. The defence minister’s desire to whitewash the place is the realisation of the Palestinian strategy to take over the area.”

More pertinent to the issue at stake is the repetitive forced displacement which the residents of Khan Al-Ahmar have endured since their first expulsion from the Naqab after the Nakba, as well as Israel’s refusal to recognise Bedouin villages.

For the Palestinian Authority, Khan Al-Ahmar provides a PR opportunity when it is deemed beneficial. After all, the Palestinian experience of forced displacement is not alien to the PA, even though Ramallah does not deem the refugees and their legitimate rights to be relevant to its diplomatic discourse.

The EU, on the other hand, is concerned with the village only as long as it fits into the humanitarian paradigm. A 2018 European Parliament resolution outlined clearly the EU’s concerns on the matter, not least linking the issue to the two-state paradigm. Its warnings to Israel on the forced evictions are no different to those issued on various other occasions; this merely reminds Israel that it is jeopardising the two-state compromise, and that forcible transfer “constitutes a grave breach of international humanitarian law”.

It is ludicrous to speak of Palestinians attempting de facto annexation on their own land, as Regavim claims. They have a more than legitimate right to their land, which Israel’s presence has denied for decades. Moreover, despite the wild claims over any Palestinian strategy, the truth is that the international community’s support for Palestine is inconsequential compared to its complicity with Israel and its own de facto annexation plans, as the Abraham Accords have exposed so clearly.