HOME / WORLD / Who Is Killing Whom in the Middle East? Blaming Iran Might be an Excuse for War 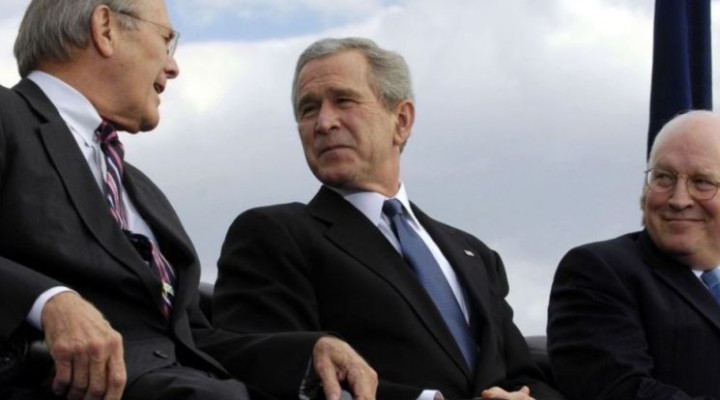 Iran did not kill those 4,424 American soldiers who died in Iraq. President George W. Bush, Vice President Dick Cheney and the band of psychopaths at the Pentagon and National Security Council did that.

Newsweek is reporting a story regarding how Iran “was responsible for the deaths of at least 608 American troops in Iraq between 2003 and 2011.” The account is sourced to a newly revised estimate prepared by analysts at the Pentagon that was discussed by Special Representative for Iran Brian Hook at a State Department press briefing on April 2nd. According to Hook, Tehran is now being blamed for 17 per cent of all US military deaths because it supplied weapons to the several Shiite militias that were opposing the US invasion, occupation and subsequent presence in the country.

Hook also stated that the American casualties are in addition to the “thousands” of Iraqi troops and civilians that were killed in attacks initiated by what he referred to as the Iranian proxy forces. Hook noted that the new number is higher than the 2015 confirmed death total of 500 that was reported by then Chairman of the Joint Chiefs of Staff General Joseph Dunford, who qualified his estimate by saying “We were not always able to attribute the casualties that we had to Iranian activity, although many times we suspected it was Iranian activity, even though we did not necessarily have the forensics to support that.”

There is little doubt that Tehran provided weapons to Shiite militias in Iraq after the invasion of the country by American forces in April 2003 and the defeat and replacement of the Saddam Hussein regime. The US was occupying the country at the time and Shiites were a repressed majority of the population given the fact that Saddam ruled through his Sunni minority.

The most controversial and lethal weapons used by the Shiite and Sunni resistance to the United States were the Improvised Explosive Devices or IEDs, subsequently also referred to as Explosively Formed Penetrators or EFPs which were capable of penetrating the armor on US military vehicles. They first appeared in Iraq in the summer of 2004, but they were initially mostly used by Sunni insurgents, not by the Shiites.

Now that the US occupation has ended, Iran and Iraq enjoy a close relationship that is based on their common Shiite religion. The former militiamen are now referred to as Popular Mobilization Forces, which were key to the eventual defeat of ISIS. The United States, which retains a major military base inside Iraq, continues to rail against Iran. During the briefing, Hook said “We are imposing costs on the [Iranian] regime for behaving as an outlaw expansionist regime. The regime is weaker today than when we took office two years ago. Its proxies are also weaker. Unless the regime demonstrates a change in policy and behavior, the financial challenges facing Tehran will mount.”

There are several problems with the Hook analysis, if that is actually what it was. The United States government has been arguing since 2005 that Iran is “interfering” in neighboring Iraq, combined with allegations about “they are killing our soldiers” to make sure that Tehran continues to be everyone recognizable regional enemy. Specific claims by generals and US politicians were made between 2005 and 2007 regarding Iranian involvement in the production of the shaped charges, which were increasingly exacting a bloody toll of US and allied military personnel.

But the claims being made by the Bush Administration, by Congress, and by the media regarding Iranian support of militants in Iraq had a number of things in common: they were generic and lacking in specificity, they were based on possibly unwarranted assumptions about Iranian interactions with other players in the region, they played fast and loose with statistics, and they seldom provided actual verifiable evidence to back up the assertions being made. One might also point out that nearly all the reports were derivative in that they build on each other to develop credibility, much like the reports about Iraq in 2002.

It has also been noted that the arguments about Iranian involvement are logically inconsistent. The Iraqi insurgency in the period 2004-2006 was largely Sunni. That the Iranians would be supplying the Sunnis or that the Sunnis would even seek such assistance does not appear probable. In an April 2007 briefing Major General William Caldwell explained, “We have, in fact, found some cases recently where Iranian intelligence services have provided to some Sunni insurgent groups some support.” Three uses of “some” in one sentence suggest a degree of uncertainty. Even the relatively tame media at the briefing were skeptical, asking “Do the Iranians support all the militias in Iraq?”

The fact that the EFP is very simple to make also argues against a largely Iranian provenance. The EFP or variations thereof has been around for a long time. It was reportedly used under its old name “shaped charge” by the French resistance against the Germans and by the Irish Republican Army against British armored vehicles and it has been used extensively by both Hezbollah and Hamas against the Israelis.

The case against Iran basically relies on a basic argument that the EFP is actually a sophisticated weapon that has to have its copper disk machined in a weapons shop that is accustomed to milling metal to the finest tolerances. According to those who believe in an Iranian hand in EFP attacks, it is not possible that the weapons are being produced by Iraqis without Iranian assistance but the fact is that the Iraqis are more than capable of making the weapon. Iraq had a large and relatively sophisticated military prior to 2003. It had its own weapons shops and ordnance experts, many of whom were Sunnis and many of whom became unemployed in the spring of 2003 when the army was disbanded.

So Iran’s EFP weapon of choice that, according to the Pentagon, has killed 608 Americans turns out to be not that hard to make and not uniquely Iranian. But the real argument against Brian Hook’s numbers is the assumption made by the government analysts that supplying weapons, even if and when the end user can be demonstrated, makes one responsible for who gets killed as a result. Since the US is the world’s leading arms manufacturer, that argument leads down a slippery slope as “Made in USA.” weapons are likely featured in every conflict.

Also bear in mind that the United States in Iraq was an invading army in what became a guerrilla war in which that country’s civilians ultimately constituted most of the victims. By one estimate, 460,000 Iraqis died, many by US-made ordnance. To cite one other more recent example of what that measure of accountability might mean, the United States could be considered responsible for the deaths of tens of thousands civilians in Yemen, 5,000 in 2018 alone, as the Saudis are using US supplied weapons. And there are a lot of other instances of American made weapons winding up in all kinds of places, including the arsenals of ISIS and al-Qaeda. Al-Qaeda in its war against the Russians in Afghanistan relied largely on American weaponry. Some of those weapons are still being used to kill American rather than Russian soldiers.

Since the United States government is selectively charging Iran with offenses that might well be exploited by neoconservatives named Bolton and Pompeo to initiate a war it should be more careful in how it attempts to frame its arguments. Iran did not kill those 4,424 American soldiers who died in Iraq. President George W. Bush, Vice President Dick Cheney and the band of psychopaths at the Pentagon and National Security Council did that when they initiated a chain of events that began with attacking a country that they knew posed no threat against the United States. The bloody consequences of that action continue to this day.

0 thoughts on “Who Is Killing Whom in the Middle East? Blaming Iran Might be an Excuse for War”