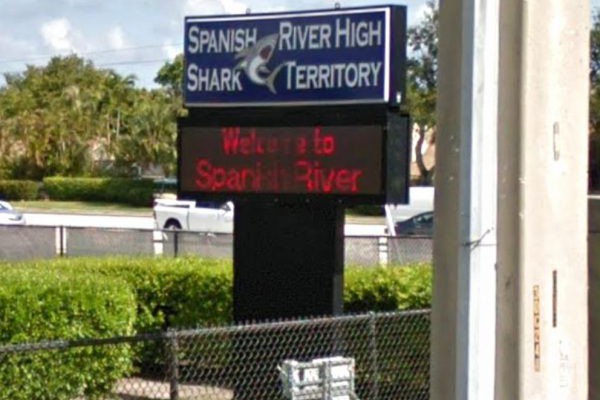 A friend of mine recently commented that if the current trend to reduce the study of history in schools to easily digestible politically correct soundbites that are being successfully pushed by social justice warriors continues, we will soon be limited to discussing how horrible slavery was, the Stonewall Inn riots and the so-called holocaust. Indeed, it seems that those who complain the loudest are the only ones listened to and no one complains more often or at greater volume than American Jewish groups intent on preserving the benefits that are derived from always being able to claim their perpetual victimhood.

Recent media accounts from Florida detail how low pandering to Israeli and Jewish interests can go. A high school principal identified as Dr. Willian Latson was removed from his position after he revealed to a parent that he considered the holocaust to be a belief and not a demonstrated fact. According to statement made by the school district, the action was taken “out of an abundance of concern” for students and staff after Latson had “made a grave error in judgment.” It added that “In addition to being offensive, the principal’s statement is not supported by either the School District Administration or the School Board.”

The story took place in the School District of Palm Beach County. Latson, now the ex-principal of Spanish River High School in West Palm Beach, presided over his school in a heavily Jewish district that includes Boca Raton. Latson is currently being considered for reassignment by the school district though there are have also been recurring calls from county and state legislators to fire him, which will undoubtedly occur.

The tale is somewhat convoluted and there are some disagreements about what actually took place, but it goes basically like this: roughly one year ago a high school parent, unidentified but presumably Jewish, emailed Latson asking him to confirm that holocaust education was a top priority in Spanish River H.S. He responded by email that the school has a “variety of activities” for holocaust education but “Not everyone believes the Holocaust happened. And you have your thoughts, but we are a public school and not all of our parents have the same beliefs.” He added that an educator has “the role to be politically neutral but support all groups in the school… I can’t say the Holocaust is a factual, historical event because I am not in a position to do so as a school district employee.”

After the emails were revealed to school officials, presumably by the parent, a year-long investigation commenced in which Latson apologized for having caused offense, saying his emails “did not accurately reflect my professional and personal commitment to educating all students about the atrocities of the Holocaust.” The school board initially ruled that he had not done anything meriting disciplinary action or a reprimand, but the story did not end there. Simultaneously, an online petitionwhich eventually included 6,000 signatures was initiated demanding Latson’s replacement and he was subsequently removed from his position. The school board officials justified their change of course by citing his apparent unwillingness to comply with instructions, stating that they previously had ordered him to “expand the Holocaust curriculum at Spanish River and ordered him to spend ‘several days at the United States Holocaust Museum to increase his personal knowledge.’”

Latson responded that his emails and comments were not “accurately relayed” to the media: “I have been reassigned to the district office due to a statement that was not accurately relayed to the newspaper by one of our parents. It is unfortunate that someone can make a false statement and do so anonymously and it holds credibility but that is the world we live in.”

His statement implicitly blaming a school parent generated new problems for Latson with two Palm Beach County state lawmakers and the Anti-Defamation League (ADL) calling for his firing because he had not groveled sufficiently. ADL stated that “ADL had hoped his apology was sincere and Latson could learn from his mistakes. Given that he cannot take responsibility for his actions, Latson should resign, and if not we believe the district should end his employment.”

The two state officials, Senator Kevin Rader and Representative Tina Polsky issued a statement saying “By his latest email, Dr. Latson has shown no remorse for his actions and we call on the district to immediately terminate him.”

The publication of Latson’s comments also unleashed heavy criticism from a broad range of other Florida public officials. Governor Ron DeSantis, who calls himself the most pro-Israel governor in American, joined in with “Look, to act like the Holocaust is a matter of debate, I mean, is just absurd.”

Senator Rick Scott called Latson’s comments anti-Semitism and tweeted that the “fact that someone charged with educating children would be unable to speak unequivocally on the realities & horrors of the holocaust is incredibly concerning.” Jewish State Representative Randy Fine, who recently introduced legislation officially banning “anti-Semitism” in Florida public schools, said “the law does not allow a Holocaust-denier to serve as a public school principal.” In a publish statement he expanded on that point, writing that “anti-Semitism by public employees in our K-20 public education system must be treated the same as racism.”

The controversy inadvertently revealed the extent to which state law now requires the holocaust to be taught in all Florida public schools. Ironically, Spanish River High has one of the country’s most rigorous holocaust education programs with the subject being taught both in ninth- and 10th-grade English classes as well as a component of both U.S. and world history. There is also an elective course as well regular holocaust assemblies for the entire school featuring keynote speakers. After the Latson controversy started, the school district required all 10th graders to read “Night” by Elie Wiesel. There are now plans to add multiple annual assemblies for students in every grade in the school district this year.

So, if you go to school in Florida your English and history courses will be about the holocaust and you will have to attend holocaust assemblies just in case some alleged atrocity has not been described extensively enough in class. Well, when does it end? When does the almost incessant pandering to Zionists and Jewish groups become too much for the deliberately kept-in-ignorance American public to tolerate?

The so-called holocaust was an historical event that took place in Europe seventy-five years ago. It has an established but very debatable narrative that pretty much has been contrived over the past fifty years for political reasons, see Professor Norman Finkelstein’s brilliant deconstruction of it in his book “The Holocaust Industry: Reflections on the Exploitation of Jewish Suffering.” Those inconsistencies in the holocaust story and its general lack of credibility may have been what Latson was referring to.

The imposed holocaust narrative is full of holes and contradictions in terms of who was killed and how, but it is impossible for genuine academics to critique it if they want to stay employed. Books like Wiesel’s “Night” are largely works of fiction. The narrative exists to perpetuate the belief in Jewish suffering, which brings with it a number of practical advantages. First, it is regularly deployed to excuse the horrific treatment of the Palestinian people by Israel – Jewish suffering means that the creation of a homeland is a debt that all the world owes to the Jews without regard to what has been done to the area’s other inhabitants. Second, guilt over the alleged holocaust means that reparations from countries involved must be continued indefinitely. Currently the Poles are resisting new Jewish claims while the Germans have been paying for years. It is now being asserted that the descendants of so-called holocaust survivors have been genetically psychologically damaged, in the womb as it were, so reparations will presumably continue forever.

Third, holocaust guilt is used in the United States to counter any criticism of what Israel and Jewish groups are up to, as they use their wealth and access to power to corrupt America’s institutions and drive the country to needless wars. One might well ask, when confronted by the taxpayer funded holocaust museums that appear to spring up like mushrooms, why so much interest in a possible crime that has nothing to do with the United States? Where are the museums and courses in Florida schools discussing the mass killing that happened on our own shores, the genocide of the native Americans?

Lest we forget, the holocaust industry operates everywhere in America, particularly in the education system. Eight states already have laws mandating holocaust education (California, New York, New Jersey, Rhode Island, Florida, Illinois, Indiana and Michigan) and there is considerable pressure to make it universal in the United States. An alarmed World Jewish Congress (WJC) is urging required holocaust education for everyone everywhere “citing statistics from a 2018 poll revealing half of millennials can’t name a single Nazi concentration camp.”

A currently circulating WJC petition in Congress expresses concern over the rise in anti-Semitism, with a warning that “the horrors of the Holocaust are fading from our collective memory…” A bill to brainwash students so they will not forget, ‘The Never Again Education Act’, is currently making the rounds in the House of Representatives. It would make holocaust study mandatory in public schools and set up a Department of Education program that would train teachers to properly instruct students about the story of Jewish suffering.

Yes, the “Never Again Education Act” will soon be sucking up taxpayer money like an enormous vacuum cleaner and creating lots of new jobs for holocaust instructors, who will, of course, all be Jewish. Public schools will be teaching the next generation about what a great place Israel is and how the holocaust justifies vigilant groups like AIPAC and ADL, though it will not mention how they have corrupted the U.S. government and turned America’s foreign policy into an Israeli wag-the-dog. But who’s complaining? It’s good for the Jews, isn’t it?

So Dr. William Latson will be unemployed and possibly unemployable because he spoke the truth, a lesson to all of us that one must never cross the red lines established by the wielders of Jewish power in America. One might reasonably currently expect that serial pedophile Jeffrey Epstein will use the holocaust get-out-of-jail-free card in his defense, claiming that his recollection of the event has so traumatized him that he did bad things that he would not have otherwise considered. Poor Jeffrey. He has suffered so much.