HOME / WORLD / Regime Change in Iran: Been There, Done That

Regime Change in Iran: Been There, Done That 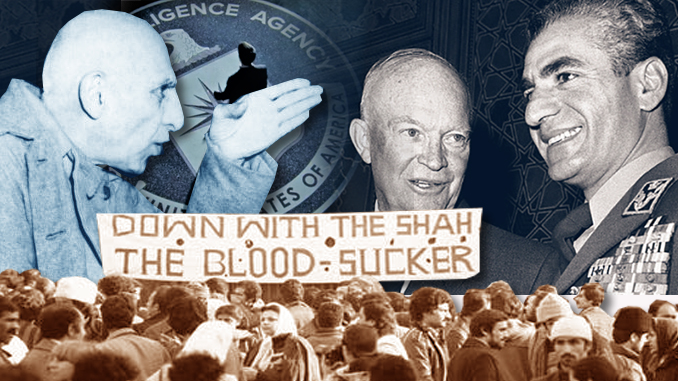 As the drums of war are banged for war against Iran, don’t forget the CIA’s disastrous overthrow of Iranian Prime Minister Mossadeq in 1953.

The failed coup attempt in Caracas in early May brings to mind the techniques used by the Central Intelligence Agency (CIA) and British intelligence in Iran in 1953 to overthrow the Mohammad Mossadeq government. It is quite astonishing how that regime-change long-ago operation parallels what is currently taking place in Venezuela and also with regards to Iran yet again.

Mossadeq was the democratically elected prime minister of Iran beginning in 1951, serving in a government in which the Shah with limited authority was the head of state presiding over a parliamentary system. Iran was nominally independent at the time, but it was heavily influenced by the neighboring Soviet Union, which retained control over several Iranian provinces after the Second World War ended, and Great Britain, which exploited the country’s oil resources through the mechanism of the Anglo-Iranian Oil Company (AIOC), which was owned by the British government. When Mossadeq, frustrated by lack of progress in negotiations with the British over sharing of oil revenues, eventually declared that he would nationalize the AIOC, London and Washington conspired to remove him.

The new National Iranian Oil Company was immediately attacked by the British, who used the Royal Navy to block export of oil from Iran’s Abadan refinery. Ships carrying Iranian oil were stopped and boarded with their shipments confiscated as “stolen property” in light of the British government’s former ownership claim on the AIOC.

By mid-1952, Britain’s blockade of Iranian oil exports had badly hurt the Iranian economy, which eventually led to government bankruptcy. Meanwhile, the American CIA, which was initially ambivalent about what the proper role in the Anglo-Iranian conflict might be, joined British agents in supporting groups inside Iran that were hostile to Mossadeq. In the Majlis parliamentary election in the spring of 1952, Mossadeq faced serious opposition funded by the Anglo-Americans, and the election eventually was suspended. By early 1953, pro-communist and pro-Shah mobs supported and coordinated by the U.S. and Britain roamed the streets, sometimes fighting each other. Fearing a communist takeover and also under pressure from London, which was threatening to withdraw from the Korean War as a quid pro quo, President Dwight D. Eisenhower agreed to carry out a joint coup d’état.

Losing popular support due to a sinking economy, as early as August 1952 a struggling Mossadeq began ruling by emergency powers and started to jail opponents, which only aggravated the crisis. A rigged referendum to dissolve parliament and grant Mossadeq authority to govern by decree passed with 99.9% approval but led to accusations that the prime minister was seeking “total and dictatorial power.” The New York Times reported, “A plebiscite more fantastic and farcical than any ever held under Hitler or Stalin is now being staged in Iran by Premier Mossadeq in an effort to make himself unchallenged dictator of the country.” The move by Mossadeq also led to the first coup attempt, which was organized by the CIA.

On Aug. 15, 1953, Col. Nemathollah Nassiri, the commander of the Shah’s Imperial Guard, delivered to Mossadeq a decree from the Shah dismissing him. Mossadeq, who had been warned of the plot, had Nassiri arrested, and the Shah and his family fled into exile in Italy. The first coup thus ended with a whimper, but it was lessons learned for the second, better organized successful attempt which followed a few days later, Operation Ajax, coordinated by Kermit Roosevelt of the CIA.

Exploiting pro-Shah sentiment in the military, the CIA and the British turned to their stables of recruited army officers while also exploiting agents infiltrated into the communist party Tudeh, which rose to the occasion by launching mass demonstrations, to include looting and arson, which quickly alienated the public and also provided a pretext for Western support of the coup as it could be promoted as “anti-communist.” Efforts were also made to turn influential clerics against Mossadeq. The Iranian people blamed the government for all their woes and rioting soon led to the calling out of the army to restore order. The army did so and then had Mossadeq arrested. He was condemned to death, but his sentence was later commuted to three years in solitary confinement followed by house arrest. He died in 1967.

End of story, but not quite. All the elements currently being used against Venezuela and Iran were there back in 1953 to bring down Mossadeq and also appear in a detailed 2018 Pentagon plan describing how to bring about a coup in Caracas. Wrecking the countries’ economies through sanctions and exclusion from the global banking network creates a crisis where one need not have existed. Meanwhile, a sustained campaign of vilification by Western political leaders and the media establishes the narrative that the benevolent intention is to block extremism and restore democracy while also eliminating a threat to the United States. And, as a last resort, the threat or actual use of force to stop the export of commodities to further wreck the economy becomes a clearly stated policy option, currently also employing secondary sanctions for anyone who dares to trade with the designated victim. Recently, America’s unilaterally imposed global ban on the export and sale of Iranian oil began. Venezuela’s oil sales are also being blocked and even its electricity grid is being attacked in an attempt to starve the Venezuelan people into rebelling against their government.

But you also have to have spies, secret agents, to get the ball rolling, just as was true in 1953. One assumes that the CIA has been active in recruiting the agents of influence inside Venezuelan political opposition as well as military circles who will bring out increasingly larger mobs as the situation continues to deteriorate. How successful they have been is difficult to determine, but Venezuelan opposition leader Juan Guaido failed the first time around, reportedly because the Venezuelan government was aware of what was happening and the contacts that CIA was relying on to bring out the army were in fact double agents.

The suffering Iranian and Venezuelan people have yet to rise up in revolt. No matter. It took more than one try to bring down Mossadeq, and National Security Advisor John Bolton has recently warned Iran that its government won’t have any more anniversaries to celebrate if it continues with its “threats.” The Trump administration is also reported to be preparing military options for dealing with Venezuela.

Bolton has even warned the Russians, who are assisting Venezuela’s government: “This is our hemisphere. It’s not where the Russians ought to be interfering. This is a mistake on their part.”  He is seemingly unaware of the irony, that the Russians might make the same claim about Eurasia and the Iranians regarding the Persian Gulf, where Bolton and his neocon friends in Washington have been the source of nearly continuous conflict.

Regime Change in Iran: Been There, Done That

0 thoughts on “Regime Change in Iran: Been There, Done That”