HOME / WORLD / No One Is Listening: A Country Divided Against Itself 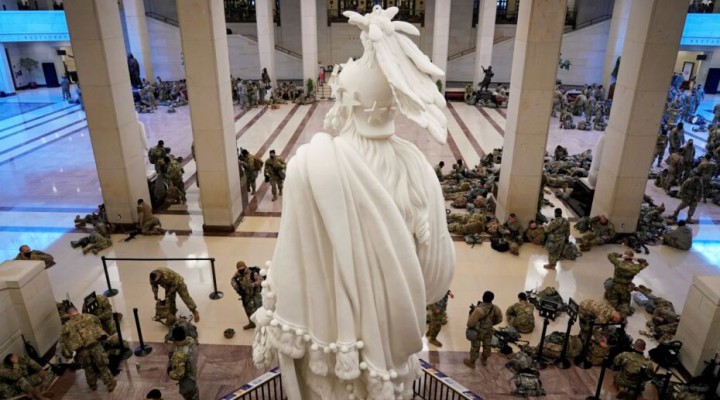 The U.S. may morph into two nations with the increasingly impoverished helot “deplorables” under the heel of the empowered social justice warriors.

In a recent article Catholic University professor Claes G. Ryn wrote “Few people are really open to persuasion in any case—not just on political subjects but on any subject about which they care and on which they have adopted certain views. Diehard partisans for a certain outlook will refuse to have their beliefs questioned, and so will many others. They will be no less dismissive of a document challenging their opinions if it is full of footnotes and appendixes. Such a document will, indeed, make them resist it even more. As for the relatively few people who are truly open-minded, they will not find another person’s observations dispositive. They will, as they should, want to consider the evidence on a contested matter for themselves.”

The observation immediately calls to mind the red-blue political division that has hardened in the United States over the past several years, with the two sides persistently talking past each other. Part of the problem is that once someone has staked out an essentially ideological position, he or she will regard new developments in such a way as to fit with that preconception. Once one is locked into a viewpoint in that fashion it becomes practically speaking impossible to “consider the evidence on a contested manner” for oneself.

That tendency to want to believe that something is indisputably true means that most people find it difficult to entertain two somewhat contradictory ideas at the same time. In the current context it should be possible to believe that Donald Trump has been a very bad president based on some aspects of his performance while also conceding that many of his failings have been spawned by the unrelenting criticism he has received from the media as well as the clandestine efforts within the government establishment to undermine and destroy him. Most who emphasize the conspiracy against the president also feel compelled to defend his record. Those who don’t believe there was a conspiracy against him, including Russiagate, support his being impeached and also condemn his achievements.

Or there is the election itself, with one side believing it was stolen and the other maintaining that there was no fraud. In reality, an objective review of the actual evidence and examination of the registration and voting systems that are in place suggests that there certainly was fraud, though the issue of whether it amounted to a change in the outcome is likely a question that will never be answered as the Democrats are now in charge. Voting by mail, much promoted by the Democrats, either was a way of expanding the voters’ rolls or a mechanism that would permit widespread fraud. It is not unreasonable to regard it as doing both.

COVID-19 is another good example of linear thinking. Critics of the pandemic tend to go all the way, minimizing the impact of the disease while also contending that it is a hoax contrived by the government to take away the rights of citizens. Against that, one should be able to recognize that the disease is both highly contagious and deadly for certain demographics while also accepting that the government has mishandled the response to it and is seeking to aggrandize its power over ordinary citizens. So both viewpoints can more-or-less be true.

So, we come to the incident at the U.S. Capitol building in Washington on January 6th. Various unofficial estimates put the number of “Stop the Steal” protesters objecting to what was seen as a fraudulent election at between 20,000 and 200,000. The language being used to describe what occurred that afternoon is suggestive and would likely delight George Orwell. The liberal media (nearly all of it) as well as some Democratic congressmen have officially declared it “incitement of insurrection.” Other expressions that are popping up include “domestic terrorism,” “sedition,” “right wing mobs,” a “coup” or a “storming” of the building, all reportedly driven by incendiary language used by President Trump. Others preferred describing a “breaching” of security or even a “riot” or possibly “treason.”

A local newspaper in Virginia wrote a headline saying that the Capitol building was “ransacked” while Politico sounded the alarm about the “mob who breached the Capitol.” The New York Times thundered that the “mob” included “infamous white supremacists and conspiracy theorists.” What is not in dispute is that five died during the incursion into the building, including a woman Air Force veteran who was unnecessarily shot and a Capitol Police Force officer who was murdered by being hit in the head with a fire extinguisher. That the death toll was not higher is inevitably being attributed by some to restraint by the police due to “white privilege” as most of the demonstrators were Caucasian.

Trump allies reject the language and all it implies, insisting that the president did not ever unambiguously encourage actual violence on the part of participants in the “March to Save America” and that most of the demonstration was peaceful, consisting of ordinary Americans who are shocked by the dying spasms of the country that they grew up in. A Newsweek poll determined that nearly half of Republican voters supported the demonstrations at the Capitol, while no less than 68% opined that they were no threat to the American political system, demonstrating just how divided the country is. There have also been claims that infiltrators from Antifa and BLM might have exploited the opportunity to initiate the successful assault by the demonstrators that broke the police line and forced the entry into the Capitol building. Some Democrats are also suggesting that the entry was itself aided by some of the police, a not completely unreasonable suggestion given the inexplicably poor performance by the Capitol Police Force and some photographic evidence showing demonstrators being assisted by security personnel.

One might have noted that the only thing missing from the event had been the allegations that it included “interference” by the Russians or possibly even the Chinese, but it now appears that some Democrats are actually pointing their fingers at Vladimir Putin. And surely the Iranians and even the North Koreans must have had something to do with it. We will have to wait until the Biden Administration is installed, if it is, to find out which foreigners exactly will have to be implicated and punished. One eagerly awaits the inevitable Washington Post cartoon showing Putin in his office laughing while watching on TV events in Washington.

One thing that is for sure and that is being ignored by many of those who have taken up contrary positions is that there will be consequences from what took place last week. Given the polarization in the discussion itself, “truth” will be the first entity sacrificed as the Republicans will make haste to walk away from Trump while the Democrats will not be eager to permit anyone to dig any deeper into the mechanics of the election. No matter what the GOP chooses to do, it will be the long-term loser even if Trump himself is successfully made the designated fall guy and it will have to learn how to retain the support of the Trumpsters without Donald Trump.

In spite of all the media and talking head fulminations, it nevertheless remains unlikely that Trump will actually be impeached and convicted by both houses of Congress or removed under Article 25 as that would permit his lawyers to mount a defense, which would embarrass everyone. Speaker of the House Nancy Pelosi has nevertheless raised tension by contacting the Chiefs of Staff at the Pentagon and inquiring whether the president can be denied the nuclear weapons’ codes as he appears to be “unhinged.” There is also speculation that an attack on Iran in coordination with Israel might be under consideration to change the narrative.

Perhaps more interestingly, some Democrats are calling for investigation and punishment for some fellow politicians, government employees and ordinary citizens who might be found guilty of supporting the Trump “coup.” Several identified demonstrators have already lost their jobs while the Washington Post has demanded that “seditious Republicans must be held accountable.” There is even some discussion of setting up a “truth commission” to investigate and punish those individuals who aided in Trump’s other alleged crimes. Such people might have their liberty to travel on commercial flights, to associate in groups and/or to hold certain jobs restricted, expanding on existing anti-terror legislation that would now include a focus on “rightwing terrorism” while also increasing the number of “hate crimes.” Surveillance of individuals who have committed no crimes would likely increase dramatically. Any or all of those moves by Biden would, however, set a very bad precedent, sure to beget more violence.

And also there are calls for greater restrictions on what appears on social media. One ex-Obama adviser has even claimed that social media caused the Capitol building riot by “enabling the spread of the lies, hate speech, and conspiracy theories [by rightwing extremists] that led to” the attack. Since the Democrats now command a majority in both houses of Congress as well as the White House that will mean that those labeled “white supremacists” and their message will be expunged while politically correct social justice content will be promoted. Several social media platforms have begun banning what they call right wing material and Biden as well as several senators have, in fact, already promised to bring in stronger “domestic terrorism prevention” legislation based on the Patriot Act. And even those who believe themselves “safe” as holding reliably progressive views will eventually discover that any deviance from Establishment acceptable positions will be forbidden. Free speech in America will become as dead at the Dodo and the United States would become effectively two nations with the increasingly impoverished helot “deplorables” under the heel of the empowered social justice warriors. It won’t be pretty, and it won’t be stable.

0 thoughts on “No One Is Listening: A Country Divided Against Itself”