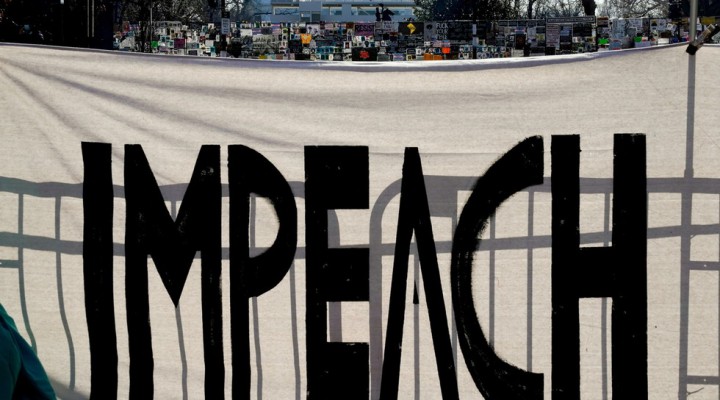 The rushed proceedings against Donald Trump are not about accountability, but a politicized act of theater that will deepen the ideological chasm which divides America today and drag us ever closer to the suicide of the Union.

One hour into the two-hour debate, it became abundantly clear that President Donald Trump was destined to become the first American President ever to be impeached twice. From the Speaker of the House, Nancy Pelosi, on down, this point was repeated, as if the political ignominy derived from that fact constituted the worst thing that could happen to a person. But this posturing was more than countered by the rhetorical responses from the Republicans, who did not defend the President so much as attack the process underway in the House of Representatives as little more than a hypocritical act of politicized point scoring.

The Republicans, it was clear, did not view the first impeachment effort, which failed to gain a conviction, as a legitimate exercise of governance, and as things stand it looks as if the vast majority of them feel the same about the current undertaking. Rather than looking at the efforts of House Democrats to paint the President with a scarlet letter of shame, the Republicans are treating the attack of Trump as an attack against themselves and those they represent, as and such view it more like a badge of courage.

The Articles of Impeachment levied against Donald Trump are serious charges derived from one of the darkest days in American political history—the storming and subsequent occupation of the US Capitol Building on January 6, 2020, by thousands of pro-Trump demonstrators who had assembled in Washington, DC to protest what they and the President believed was the certification by the US Congress of a fraudulent election which denied Trump a second four-year term in office. At the time of the attack, Congress sat in a joint session presided by the Vice President, Mike Pence, to carry out the tasks mandated by the 12th Amendment of the US Constitution regarding the counting of the votes of the Electoral College. There is little doubt that the timing of the action targeting the US Capitol was designed to disrupt this counting, making it, by definition, an act of sedition.

An act of sedition, in and of itself, is one of the most serious crimes with which an American citizen can be charged. While not meeting the Constitutional definition of treason, it is a treasonous act which requires a decisive response. This is even more so when the person accused of sedition is a sitting President of the United States. The Constitution of the United States provides Congress with a remedy for such a crime—impeachment. The impeachment hearing convened by Speaker Pelosi is ostensibly for this purpose—to hold the President accountable for his actions.

The problem confronting Pelosi and her democratic colleagues, however, is that they themselves have muddied the political waters surrounding President Trump as to make any legitimate impeachment exercise appear little more than an act of political revenge. As their Republican counterparts repeatedly noted in their impassioned replies to the Democrat’s vehement accusations, the problems which befell America were not created on a single day—January 6—but rather had their roots in a politicized process of delegitimizing the 2016 election of Donald Trump that began 19 minutes after he was sworn in as President.

Most if not all the Republicans were voted into office by an electorate that had been repeatedly denigrated by senior Democrats. Whether it was Barack Obama’s 2008 dismissal of working class Americans as “bitter” people who “cling to guns or religion or antipathy to people who aren’t like them…as a way to explain their frustrations,” or Hillary Clinton’s infamous 2016 gaffe, where she declared that “you could put half of Trump’s supporters into what I call the basket of deplorables,” calling them “racist, sexist, homophobic, xenophobic, Islamophobic—you name it,” and noting that Trump “has lifted them up.”

The House Democrats clamoring for the second impeachment of Donald Trump have applied a similar broad brush to all Americans—by last count, over 75 million—who voted for him in 2020. They ignore at their own peril the second half of Hillary Clinton’s statement, where she noted that the other half of Trump’s supporters “feel that the government has let them down” and are “desperate for change. Those are people,” she declared, “we have to understand and empathize with as well.”

For many Republican voters, Donald Trump was the first politician who resonated with them, for whatever reason. Their vote for him was more a rejection of Hillary Clinton’s Democratic Party and the mainstream Republican establishment than it was a well-reasoned decision linked to specific policies. Trump “felt” right, and they “felt” better by supporting him. The notion that these voters somehow turned on Trump after four years of uneven governance was belied by the fact that 12 million more Americans voted for him in 2020 than in 2016. The Trump phenomenon was, and is, real.

Donald Trump deserves due process. The very Constitution the Democrats claim he assaulted requires it. The current proceedings, built as they are on a foundation of political extortion (Pelosi’s effort to compel Vice President Pence into invoking the 25th Amendment), is a purely political act designed to destroy the political viability of Donald Trump and the movement he led. Because the Democrats are seeking revenge as much or more than they seek justice, their efforts are doomed to fail.

Logic dictates that the political equivalent of Newton’s Third Law of physics—for every action there is an equal and opposite reaction—applies in full effect here. The only outcome from this exercise can be more backlash and division, belief and desire are not mutually exclusive; the Democrats are blinded by their hatred for Trump and his “deplorables” to such an extent that normal causal analysis is foregone. The Democrats smell blood, and are moving in for the kill, not realizing that they are heading into a trap of their own making.

To better understand the nature of this trap, one only needs to turn to the history pages. In 1918, the German Army was defeated on the field of battle. Censorship and the dissemination of false and misleading information blinded the German population to this reality. They did not trust the words of their elected officials because there was no viable evidentiary proof presented of this defeat, leading to a cognitive dissonance that produced an outright denial of their military debacle. This mindset was furthered by statements made by German leaders to returning soldiers that “no enemy has vanquished you.” Thus was born the “stab in the back” legend from which the Nazi party of Adolf Hitler drew its motivation and strength.

In 2020, Donald Trump lost his bid for reelection. Four years of anti-Trump resistance at the hands of the Democrats in Congress, combined by an anti-Trump bias in the mainstream media, had conditioned Trump supporters to be distrustful of these election results. The post-election censorship of any discussion regarding the legitimacy of the 2020 election result only fuels the mistrust and misgivings of Trump’s supporters. This suspicion was furthered by the repeated statements of the President and his supporters that the election was stolen from them.

America is teetering on the edge of a political abyss which, once crossed, there will be no coming back. If 75 million Americans believe that their political future is being nullified by vengeful politicians in Congress, then the ideological foundation is being laid for the birth of an American “stab in the back” legend which will produce a divided nation incapable of ever being reunited.

The House Democrats have ignored this possibility, to the detriment of the nation. Having presided over a kangaroo court seeking a politicized rush to judgement, the House of Representatives will now turn the matter over to the US Senate for the conduct of a trial. Chuck Schumer, the Senate Minority Leader, is calling for a trial and conviction to take place prior to the inauguration of Joe Biden on January 20, 2021. The Senate Majority Leader, Mitch McConnell, would do well to resist this call.

Once the President has left office, the Senate can undertake the kind of evidence-based deliberations that the House ignored. Such a trial should examine every aspect of the conditions leading up to the events of January 6, 2020. Only in doing so can the United States avoid the trap of breathing life into a “stab in the back” theory that will only grow over time, condemning the American experiment in representative democracy to a self-fulfilling prophesy of its own demise.

Is the Establishment Planning a False Flag “Insurrection” for Inauguration Day?

We the People vs. US Elites

Making Sense of the Impeachment Charges