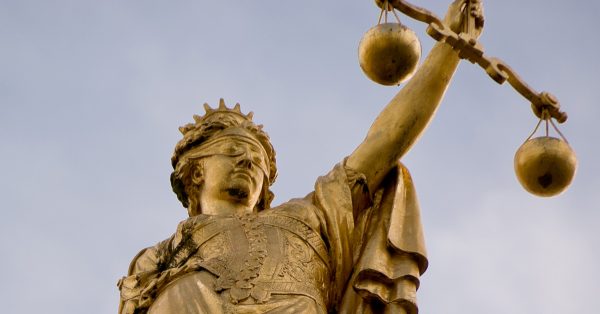 How “the Law” fails to deliver Justice

When one travels nearly anywhere in Europe where Medieval government centers, including courts, remain, one will frequently see the personification of a sometimes blindfolded woman representing Justice holding a sword in one hand and a scale or a scroll in the other. As soon as human beings came together to form governments, one of the first demands has always for justice that is accessible to all and that is readily understood. That is not to say that governments have not corrupted the mechanisms that were set up to deliver justice to serve their own parochial ends, but it does demonstrate that the human desire for fair treatment under law has been strong for thousands of years.

Now, it seems, those who seek justice often find that justice is denied through various artifices that have been contrived to give the government greater control over what constitutes criminal behavior. It is an emphasis on punishment of those the government has decided to make an example of. One only has to look at the treatment of whistleblowers by the US government, most notably the cases of CIA veterans Jeffrey Sterling and John Kiriakou, where punishment was the objective to discourage anyone from exposing criminal behavior by those in charge.

Even though in theory whistleblowers are protected because they have come forward to reveal illegal activity by the government, in practice that protection is often notional. And then there are those instances where justice is deliberately perverted, as in the current case of Julian Assange, whom the United States government would like to extradite so he can be tried under the Espionage Act of 1917. But the actual charges against Assange are where things get murky. Assange is accused of having collaborated with Chelsea Manning to steal and publish classified material relating to clear evidence that atrocities were carried out by the US military in Iraq and then covered up. And perhaps more to the point in political terms, Assange is also being accused of having participated in the theft of the Hillary Clinton emails in 2016. It should be pointed out that the Federal government has not provided any actual evidence of either alleged crime.

A British high court justice has approved Washington’s extradition demand re Assange but the case has now been moved to a final effort to appeal the ruling. It is likely that Assange will be convicted if he is sent to the US in spite of the fact that his only crime was that he was an effective journalist doing what good journalists do. His life has been destroyed in any event. He spent 82 months in the Ecuadorean Embassy in London having been granted asylum status and is now in solitary confinement in the top security Belmarsh prison, where Britain sends its terrorists. He has been in Belmarsh for 31 months and recently suffered a stroke. It is rather cruel and unusual punishment for someone who has not been convicted of anything.
It is perhaps not unreasonable to examine more closely the shenanigans related to the criminal justice system as it is mismanaged by today’s “democratic” governments to include the United States and Britain. Indeed, one might consider that the games being played could be summed up by the recently coined expression “lawfare.” The word came into common use after a 2001 essay by Colonel Charles J. Dunlap written for Harvard’s Carr Center. Dunlap defined lawfare as “the use of law as a weapon of war” including “the exploitation of real, perceived, or even orchestrated incidents of law-of-war violations being employed as an unconventional means of confronting” a superior opponent. It is “a method of warfare where law is used as a means of realizing a military objective” as well as a “cynical manipulation of the rule of law and the humanitarian values it represents.” In the United States, lawfare has been particularly associated with the concept of “universal jurisdiction,” that is, one nation or an international organization hosted by that nation reaching out to seize and prosecute officials of another. Or, as in Assange’s case, an Australian citizen residing in Britain being extradited for trial by Washington for an alleged theft of classified information by an American whistleblower.

Indeed, one of the most disturbing aspects of American foreign policy since 9/11 has been the assumption that decisions made by the United States are binding on the rest of the world, best exemplified by President George W. Bush’s warning that “there was a new sheriff in town.” Apart from time of war, no other nation has ever sought to prevent other nations from trading with each other, nor has any government sought to punish foreigners using sanctions with the cynical arrogance demonstrated by Secretary of State Mike Pompeo. The United States uniquely seeks to penalize other sovereign countries for alleged crimes that did not occur in the US and that did not involve American citizens, while also insisting that all nations must comply with whatever penalties are meted out by Washington. At the same time, the US government demonstrates its own gross hypocrisy by claiming sovereign immunity whenever foreigners or even American citizens seek to use the courts to hold it accountable for its many crimes.

Perhaps it comes as no surprise that the nation that has officially and openly incorporated lawfare into its conduct of foreign policy is Israel. Its lawfare center Shurat HaDin is in part financed by the Israeli government and has gotten involved in numerous court cases in the United States, where it finds a friendly judicial audience in New York City. The ability to sue in American courts for redress of either real or imaginary crimes has led to the creation of a lawfare culture in which lawyers seek to bankrupt an opponent through both legal expenses and damages. To no one’s surprise, Shurat HaDin is a major litigator against entities that Israel disapproves of. It boasts on its website how it uses the law to bankrupt opponents.

The Federal Court for the Southern District of Manhattan has become the clearing house for suing the pants off of any number of foreign governments and individuals with virtually no requirement that the suit have any merit beyond claims of “terrorism.” In February 2015, a lawsuit initiated by Shurat HaDin led to the conviction of the Palestinian Authority and the Palestine Liberation Organization of liability for terrorist attacks in Israel between 2000 and 2004. The New York Federal jury awarded damages of $218.5 million, but under a special feature of the Anti-Terrorism Act the award was automatically tripled to $655.5 million. Shurat HaDin claimed sanctimoniously that it was “bankrupting terror.”

Another legal victory for Israel and its friends occurred in a federal district court in the District of Columbia on June 1, 2020 where Syria and Iran were held to be liable for the killing of American citizens in Palestinian terrorist attacks that have taken place in Israel. Judge Randolph D. Moss ruled that Americans wounded and killed in seven attacks carried out by Palestinians inside the Jewish state were eligible for damages from Iran and Syria because they provided “material support” to militant groups Hamas and Palestinian Islamic Jihad.

Interestingly, one might observe that the United States is becoming more like Israel in its employment of lawfare. It sanctions foreign entities based on what might be hearsay information and then sets up a mechanism to fine or imprison anyone who provides anything that might be construed as “material support” to them. Some readers might be aware of a recent action by the Treasury Department’s Office of Foreign Assets Control (OFAC) directed against Russian-based news and analysis site Strategic Culture Foundation (SCF). The site is admittedly not friendly to current United States foreign policy, but the Biden regime seems to believe that it is a malignant instrument of the Kremlin’s intelligence service based on what appears to be no evidence whatsoever apart from that clear hostility to US policies. During the first week in November the Treasury Department issued a “cautionary letter” dated October 15th to me and a number of other Americans who were contributing regular articles to SCF. The letters were hand delivered by FBI Special Agents.

The letter was quite bizarre, describing how SCF was now a “designated entity pursuant to Executive Order 13848 of September 12, 2018” which in turn relied on an April 15th designation by OFAC. “As a result of OFAC’s designation, unless otherwise authorized or exempt, all property and interests in property of SCF that are subject to US jurisdiction are blocked, and US persons are generally prohibited from engaging in transactions with them.”

The letter went on to indicated that SCF has “interfered in or undermined public confidence in United States elections, as set forth in the Foreign Interference in US Elections Sanctions regulations…and Executive orders issued under the authority of the International Emergency Economic Powers Act…Under applicable law, each violation of the above referenced regulations is subject to a statutory maximum civil monetary penalty of up to the greater of $311,562 or twice the value of the underlying transaction.”

The clear intent of the Treasury letter and the legislation that it represents is to prevent American writers and journalists from contributing to foreign websites and publications if those sites and journals are critical of United States policies. The threat of a grossly punitive fine is a warning that one will be bankrupted or even imprisoned if the letter is ignored, which is lawfare at its most effective. It would appear that all of the US-based journalists involved have therefore cut their ties with SCF.

I would make several observations regarding this blatant move to eliminate or at least control freedom of speech in the United States. First, I would invite readers to go to the SCF site, where one will find numerous highly respectable international journalists and writers, including a number of former senior diplomats. Second, as a former intelligence officer who actually ran media operations for CIA in Europe and the Middle East, I absolutely reject the description of SCF as an intelligence front. Intelligence operations are based on absolute control of the agents by the directing authority, which would mean that SCF stories would have had to be scripted and designed to influence opinion in a certain way. I contributed to SCF a weekly column for nearly three years and no one ever suggested that I write on a certain subject or slant the reporting. I always went for the best story. That kind of freedom is not how an intelligence agency operates, which is a point I also made to the FBI couriers.

Finally, I would observe that the real damage is being done through the employment of government driven lawfare against ordinary citizens who are exercising their right of free speech. It is easy to claim that a foreign news service is “undermining confidence in US elections” as it is a charge that one need not have to prove. Indeed, it is unprovable and it is a weapon that can be used to manage dissent and to narrow the bounds of acceptable discourse. And it serves to cover up an unpleasant reality, which is that American elections have been tainted by the actions of two groups referred to as the Democrats and the Republicans aided by a lickspittle media, not by someone sitting in an office somewhere in the Kremlin.

Revanchist Nazism Throughout the Western World

In the Western world, journalism has been replaced by the Ministry of Propaganda

0 thoughts on “Killing the First Amendment”