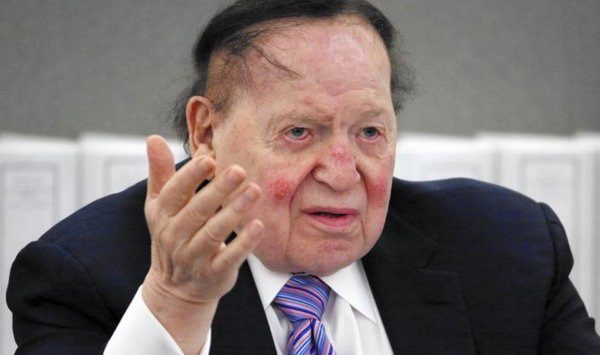 The malignant toad is dead
Casino magnate and Israeli patriot multi-billionaire Sheldon Adelson, one of the world’s richest men, died in Las Vegas on January 11th at age 87. He had been suffering from cancer and has been buried at the Mount of Olives Cemetery in Israel. When his body arrived in Israel it was met by Prime Minister Benjamin Netanyahu as well as Jonathan Pollard, the most damaging spy in United States history. Tributes to the fallen “hero” poured in from the political class in both the United States and Israel and it has even been reported that President Donald Trump was intending to hoist the American flag at half mast over federal buildings to honor the “great humanitarian philanthropist.” Unfortunately, the flag was already at half mast honoring the death of Capitol Police Force officer Brian Sicknick, who was murdered in the Capitol building last Wednesday.

Trump has not mentioned the service unto death of Sicknick and the flag lowering itself was apparently a bit of an afterthought on behalf of the White House, but he had plenty to say about his good buddy Adelson, who has been the principal funder of the Republican Party over the past five years. As he can no longer use Twitter, the president’s condolences were posted on the White House site: “Melania and I mourn the passing of Sheldon Adelson, and send our heartfelt condolences to his wife Miriam, his children and grandchildren. Sheldon lived the true American dream. His ingenuity, genius, and creativity earned him immense wealth, but his character and philanthropic generosity his great name. Sheldon was also a staunch supporter of our great ally the State of Israel. He tirelessly advocated for the relocation of the United States embassy to Jerusalem, the recognition of Israeli sovereignty over the Golan Heights, and the pursuit of peace between Israel and its neighbors. Sheldon was true to his family, his country, and all those that knew him. The world has lost a great man. He will be missed.”

Missing from the Trump eulogy is any mention of what Adelson did for the United States, which is his country of birth and where he made his fortune engaging in activity that many would consider to be a vice. In fact, Adelson was all about the Jewish state, positioning himself as the principal funder of the Republican Party under Donald Trump and receiving in return as a quid pro quo the U.S. withdrawal from the Iran nuclear agreement (JCPOA), the move of the U.S. Embassy in Israel to Jerusalem, the recognition of Israeli annexation of the Syrian Golan Heights, and a virtual concession that the Jewish state could do whatever it wants vis-à-vis the Palestinians, to include expelling them from Palestine. Adelson once commented that Israel does not have to pretend to be a democracy but it must be Jewish, presumably to help the process of Arab genocide move along.

Adelson’s mechanism, initiated under George W. Bush, is familiar to how the Israel Lobby operates more generally. It consisted of the exploitation of the incessant need of campaign money by the GOP, which Adelson provided with strings attached. He worked with the Republicans to completely derail the admittedly faux peace process begun under Bill Clinton, which depended on a two-state solution, and instead give the Jewish state a free hand to implement its own unilateral Greater Israel Project extending from “the Jordan River to the Mediterranean.” As part of that expansion, Israel has been building illegal settlements while also bombing and killing Lebanese, Syrians, and Iranians and assassinating scientists and technicians throughout the region.

All of the interventions against Israel’s neighbors took place even though the Jewish state was not technically at war with anyone. The U.S. meanwhile funded Israeli aggression and watched the spectacle without any complaint, providing political cover as necessary, while also maintaining a major military presence in the Middle East to “protect Israel,” as Trump recently admitted.

In short, Sheldon Adelson committed as much as half a billion dollars from his vast fortune to buy control over a major element of U.S. foreign policy and subordinated American interests to those of Israel. In addition to direct donations to both major political parties, he also paid for Congressional “fact finding” trips to Israel and funded a number of pro-Israel lobbies, so-called charities and other related Jewish projects. It is indisputable that he wielded an incredible degree of power to shape Washington’s actions in the Middle East. In her own tribute to her dead husband, Miriam Adelson, an Israeli, described how he “crafted the course of nations.”

Adelson was actively engaged on Israel’s behalf until the week before his death. He provided his casino’s private 737 luxury executive jet to transport Jonathan Pollard “home” to Israel. Pollard has served 30 years in prison after being convicted of espionage and was on parole, which restricted his travel. As yet another a gift to Israel, Donald Trump lifted that restriction, allowing him to fly to Israel where he received a hero’s welcome. It is generally agreed that Pollard was the most damaging spy in American history, having stolen the keys to accessing U.S. communications and information gathering systems. A month after Pollard’s arrest in 1985, C.I.A director William Casey stated: “The Israelis used Pollard to obtain our war plans against the USSR – all of it: the co-ordinates, the firing locations, the sequences, and Israel sold that information to Moscow for more exit visas for Soviet Jews.”

Sheldon Adelson used his wealth and political connections to shield himself from any criticism due to his openly expressed preference for Israel over the land of his birth. He famously publicly stated that he wished he had worn the Israeli Army uniform instead of that of the U.S. Army, where he served briefly as a draftee. He also expressed his desire that his son would serve as an Israeli army sniper, presumably allowing him to blow the heads off of Palestinians. In 2013 Adelson advocated ending nuclear negotiations with Iran and instead detonating a nuclear weapon in “the middle of the [Iranian] desert,” followed by a threat to annihilate the capital city Tehran, home to 8.6 million, to force Iran to surrender its essentially non-existent nuclear program.

So, the world is definitely a better place due to the passing of Sheldon Adelson. Or is it? His Israeli wife Miriam owns more than 40% of Las Vegas Sands Corp Casinos Inc., estimated to be worth in excess of $17 billion. She has proposed that a new chapter be included in the Jewish bible, the Book of Trump, and has pledged herself to continue her husband’s work. Trump had previously given her the highest award that a president can bestow, the Presidential Medal of Freedom. Freedom, of course, does not apply to Palestinians. And if one is concerned that the Democrats will not be cooperative, they too have their own major donor similar to Adelson. He is an Israeli film producer named Haim Saban, who, echoing a similar statement by Adelson, said that he is a one issue guy and that issue is Israel.