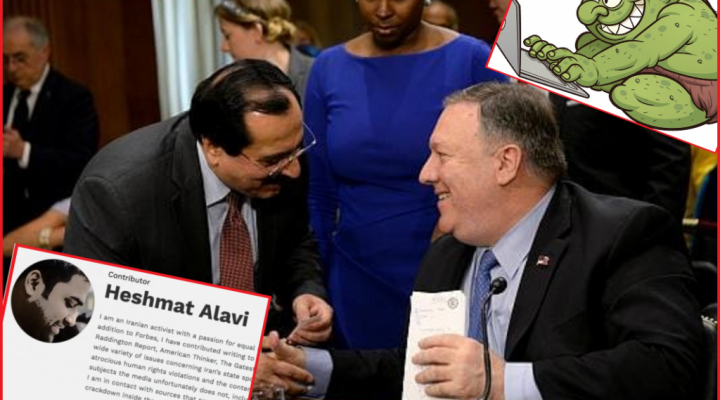 One of the claims made about alleged Russian interference in the 2016 U.S. election was that Kremlin-controlled entities were using fake identities to create dissension and confusion on social network sites. This should surprise no one, if it is true, as intelligence operatives have been using false names since Sumerian times.

The concern over fake identities no doubt comes from the deception involved, meaning that if you are dealing with a real person you at least have some handle on making as assessment of what something means and what is likely to occur. A false persona, however, can pretend to be anything and can advocate or do something without any yardstick to measure what is actually taking place. In other words, if Mike Pompeo says something you know that he is a liar and can judge his words accordingly but if it is someone otherwise unknown named Qwert Uiop you have to wonder if he or she just might be telling the truth. You might even give them the benefit of the doubt.

A prime example of a false internet persona has recently surfaced in the form of an alleged “activist” invented by the Iranian terrorist group Mojahedin e Khalq (MEK). MEK is a curious hybrid creature in any event in that it pretends to be an alternative government option for Iran even though it is despised by nearly all Iranians. At the same time, it is greatly loved by the Washington Establishment which would like to see the Mullahs deposed and replaced by something more amenable to western and Israeli worldviews.

MEK is run like a cult by its leader Maryam Rajavi, with a number of rules that restrict and control the behavior of its members. One commentary likens membership in MEK to a modern day equivalent of slavery. The group currently operates out of a secretive, heavily guarded 84 acre compound in Albania that is covertly supported by the United States, as well as through a “political wing” front office in Paris, where it refers to itself as the National Council of Resistance of Iran.

MEK, which is financially supported by Saudi Arabia, stages events in the United States in Europe where it generously pays politicians like John Bolton, Rudy Giuliani and Elaine Chao to make fifteen-minute speeches praising the organization and everything it does. It’s paying of inside the Beltway power brokers proved so successful that it was removed from the State Department terrorist list in 2012 by Hillary Clinton even though it had killed Americans in the 1970s. MEK also finds favor in Washington because it is used by Israel as a resource for anti-Iranian terrorism acts currently, including assassinations carried out in Tehran.

MEK’s fake journalist, who has recently been exposed by The Intercept, is named Heshmat Alavi. He, or if you prefer “it,” has very successfully gained access to a considerable body of generally conservative mainstream western media, including Forbes, The Hill, the Daily Beast and The Federalist. Alavi has placed scores of articles as “an activist with a passion for human rights,” aimed at discrediting Iran and its government while also subtly praising MEK as an alternative to the current regime. His bona fides have never been questioned, even by Forbes, which placed no less than 61 articles under the name between April 2017 and April 2018. The pieces appearing allegedly by Alavi are reportedly composed at a “troll factory” as a so-called “group account” in Albania where MEK members who belong to the organization’s “political wing” toil under tight security.

Alavi’s contribution to the damning of Iran has not been insignificant. An article written by him/it that appeared in Forbes claiming that the Mullahs had been able to increase their military budget due to having money freed up by the Joint Comprehensive Plan of Action (JCPOA) agreement. The article reached the White House and reportedly helped convince the Trump Administration to withdraw from the pact.

To supplement the Alavi propaganda effort, MEK’s Albania operation uses banks of computers manned by followers, some of whom are fluent in English, who serve as bots unleashing scores of comments supporting regime change in Iran while also directing waves of criticism against any pro-Iranian pieces that appear on social media, to include Facebook and Twitter. By one account, more than a thousand MEK supporters manage thousands of accounts on social media simultaneously. The objective of all the chatter is to convince the mostly English-speaking audience that there is a large body of Iranians who are hostile to the regime and supportive of MEK as a replacement.

While the Iranian government and MEK might well be regarded by most Americans as a far-away problem, there was considerable shock expressed even by congress and the media when it was learned shortly before The Intercept’s revelations that the United States government had been funding a so-called Iran Disinformation Project that was employing tactics remarkably similar to those of MEK in an attempt to control the discussion over Iran policy.

Interesting! Rumor has it that Saeed operates the @IranDisinfo account that State Dep just suspended funding for because of its smear campaigns. Terrified that media will look into this – and potentially reveal that the project is under FDD – he desperately tries diversion. Cute! https://twitter.com/SGhasseminejad/status/1134498609477689345 …

45 people are talking about this

The project, run by the State Department’s global engagement center, consisted of a trolling campaign which targeted online American citizens critical of the government’s Iran policy, labeling them as disloyal to the United States and tools of the Iranian government. It used, for example, the website IranDisInfo.org and the hashtag #NIACLobbies4Mullahs. Iranian-American activist and long-time State Department contractor Mariam Memarsadeghi headed the program, receiving hundreds of thousands of dollars to “relentlessly attack critics of the Iran policy on social media…accusing them of being paid operatives of the regime in Tehran.” In all, the “Iran Disinfo” operation received over $1.5 million through the Memarsadeghi contract entity the oddly named E-Collaborative for Civic Education.

“Constant studying & constant reading”—how @nikkihaley tells @CliffordDMay she got herself so very ready & able to take on everything, not least the tyrants, represented at the UN. So much respect for her. @FDD #FDDSummit 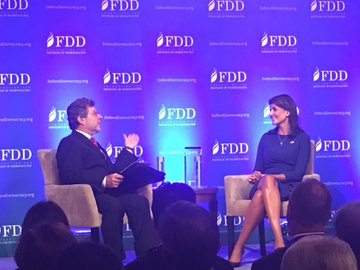 The investigation of Iran Disinfo also revealed that the neoconservative Foundation for Defense of Democracies (FDD), which has been leading the charge for war with Iran, had at least one employee working with E-Collaborative. FDD, which has been advising the Trump White House on a more aggressive policy towards Iran, has also been actively involved in the State Department effort and cross-posting material from the Disinfo campaign.

FDD has long been targeting Iran. It received $3.63 million in 2017 from Bernard Marcus, co-founder of Home Depot. Marcus is a hard-core Zionist who hates Iran and once referred to that nation as “the devil.” FDD has also received billions from Las Vegas casino mega billionaire Sheldon Adelson, the GOP’s largest individual donor, who has advocated dropping a nuclear bomb on Iran to send a message. The link between major Republican donors supporting FDD and an increase in FDD quasi-overt cooperation with the Trump Administration in demonizing Iran should not surprise anyone.

Even though the State Department operation was relatively insignificant compared to similar initiatives undertaken by Israel, the idea that an ostensibly democratic government should propagate lies to defend its own policies was definitely unsettling. Some might think that disinformation on Iran is of little importance, that it has little impact on actual policy, but they would be wrong. Bad information that is allowed to circulate freely creates its own reality. Most Americans believe that Iran actually threatens the United States, though they would be at a loss to explain exactly how that could be the case. Dubious stories that originated with Reuters about corruption in Iran have been used by Mike Pompeo to justify sanctions against the regime on humanitarian grounds, measures which have ironically hurt average Iranians disproportionately. The same story was also used in at least four books to discredit the Iranian leadership.

To be sure, the mainstream media is itself largely at fault, as it was with Heshmat Alavi, for not vetting their sources more carefully, particularly when a story is clearly providing unique information or representing a point of view that might be considered controversial. In some cases, of course, the news outlet wants the story to be perceived as true even when it knows that it is not, so it becomes an accomplice in the propaganda effort. A recent attempt to create a mechanism to establish standards by determining the reliability of online news content has, in fact, been little more than a neoconservative scheme to discredit sites that do not support the neocon point of view.

Since governments and various non-governmental constituencies now, by their own admission, are heavily into the game of providing false information and discrediting critics, most Americans will completely tune out of the process, meaning that there will be little or no measurable difference between truth and lies. One already hears complaints from all across the political spectrum that most news is fake. When one reaches the point where such skepticism becomes the consensus, both elections and democracy itself will be rendered pretty much meaningless.