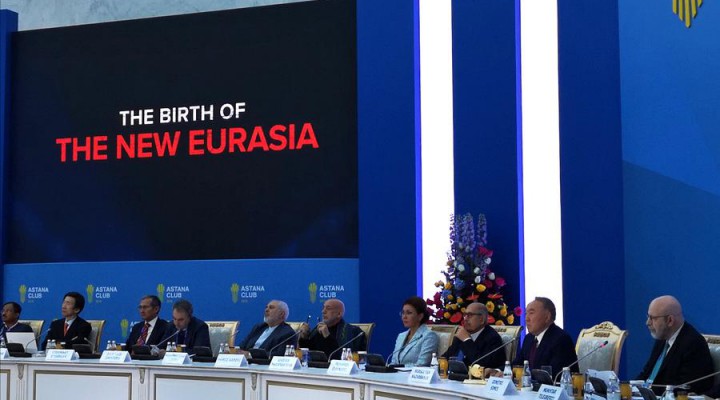 The Astana Club is one of the most crucial annual meetings in Eurasia, alongside the Boao forum in China and the Valdai discussions in Russia. China, Russia and Kazakhstan are all at the forefront of Eurasia integration. No wonder, then, that the 5th meeting of the Astana Club had to focus on Greater Eurasia – synonymous, it may be hoped, with a “new architecture of global cooperation.”

Astana Club congregates a fascinating mix of Eurasia-wide notables with Europeans and Americans. Virtually all relevant shades of the geopolitical spectrum are represented. Panels are very well structured (I moderated two of them). Discussions are frank and non-denial denials are heavily discouraged. Here is just a taste of what was discussed in Nur-Sultan, under the spectacular shallow dome designed by Norman Foster.

Vladimir Yakunin, chairman of the Dialogue of Civilizations Research Institute in Moscow, bets that China is “ready to prepare Eurasia for the future” even while there’s “no hint it will be treated by the West in a positive way.” Yakunin sees the New Silk Roads, or Belt and Road Initiative, as a “civilizational dialogue basis for China” even as Russia continues to assert itself again as a global power.

Wang Huiyao, from the Center for China and Globalization and a counselor of China’s State Council, sees China as “the biggest stabilizer” in international relations and trade as “the biggest mechanism for prosperity,” as demonstrated once again at the latest Shanghai Expo.

Senior Pakistani diplomat Iftekhar Chowdury, now at the Institute of South Asian Studies at the National University of Singapore, argues that the “liberal world order is not universal”; now it all comes down to “liberal capitalism against China.” Huiyao, for his part, is not fazed: he stresses that China already sees a “Eurasia 3D” as a new negotiation platform.

Huiyao points out how the “wrong methodology” is being applied as a “stabilizer of the world economy.” He emphasizes the role of the Asia Infrastructure Investment Bank  and especially Belt & Road as “a new impetus for developing the world in the next decades,” drawing on “Chinese culture, tradition, values” – plus a hybrid economy not only featuring state-owned enterprises. Belt & Road, he insists, is a “real international development plan.” In contrast, the great danger is “unilateralism”: “Do we have only one form of history?”

Jacob Frenkel, Chairman of JP Morgan International, clear-headed and didactic unlike many bankers, actually quotes from a Chinese proverb: “The honey is sweet, but the bee stings.” He emphasizes that “words matter. When you use ‘war’ in commerce, there are consequences” – especially when there are “millions of boats” navigating “the same ocean.”

Wang lends backing to Frenkel when he underlines the unintended consequences for third countries from the US-China trade war. Frenkel sees tariffs as “the wrong instruments” and stresses that businessmen “don’t believe in IMF models.” Boris Tadic, former President of Serbia, concentrates on how “arrogant big powers are ignoring smaller countries.”

The redoubtable Li Wei, President of the Development Research Center of the State Council Chair and a sterling negotiator, stresses that under serious “anti-globalist tendencies,” the need is for “new principles of coexistence.” China and the US should “stop exchanging punches; there have been 13 meetings to discuss the trade war.” What’s needed, says Li, in a new first stage of discussion, is for Xi and Trump to sign a memorandum of understanding.

Reacting to the possibility of China and the US signing protocols, Yakunin has to come back to his main point: “The US is not willing to see China transform itself into a great power.”

Li, unfazed, has to mention that Xi Jinping actually launched Belt & Road in Kazakhstan – at the nearby Nazarbayev University, in 2013. He’s convinced that the initiative is capable of “fully answering all challenges of the present historical moment.”

From MAD to SAD

Terje Todd-Larsen, former Under Secretary General of the UN and President of the International Peace Institute, laments that with the multilateral system weakened, and no multilateral organization encompassing the Middle East and Northern Africa, there is no table capable anywhere of congregating Arabs, Iran, Israel and Turkey. The best hope lies with Kazakhstan – and there are precedents already, with Nur-Sultan hosting the Astana process for Syria.

On the nuclear weapons front, Yakunin notes how nations that subscribe to the Non Proliferation Treaty actually now expect a “formal affirmation they won’t be threatened.” He sees “lack of trust” as the greatest threat to the NPT: “The P5 members of the NPT did not live up to their promises.”

The legendary Mohamed El Baradei, former Director General of the International Atomic Energy Agency and 2005 Nobel Peace Prize laureate, lays down the choice in stark terms: It’s either “maximum pressure, regime change and sanctions” or “dialogue, equity, cooperation, respect.” He stresses that “International institutions can’t deal with the world today – it’s way beyond them.” And the elephant in the room is, of course, nuclear weapons: “We seem frozen in place.”

El Baradei refutes the notion of the nuclear club as a model: “What is the logic and moral justification? This is an unsustainable regime.” On nuclear disarmament, it’s the nuclear states that have to start a new era. For the moment, what’s left is “to salvage the remains of nuclear arms control. We’ve gone from MAD to SAD – self-assured destruction.”

Back on the ground level, Dan Smith, director of the Stockholm International Peace Research Institute introduces lethal autonomous weapons systems – as in robots with a very high degree of autonomy – into the conversation. Not that these entities would prevent, for instance, cyber-attacks, which “can be counter-productive and self-destructive, because there will be a counter-strike.”

The undisputed star of the show at the Astana Club is really Kazakh First President Nazarbayev. There’s a feeling among seasoned diplomats and analysts that when the history of Greater Eurasia is written, Nazarbayev will be on the front page. Global turmoil may not favor it too much at the moment, but as the Russians stress, the Eurasian Economic Union, for instance, is bound to survive sanctions and the trade war, and 2025 offers a tantalizing glimpse of the future via open market for gas and transportation. The EU and the EAEU have complementary economics, and Russia can play a major role.

Nazarbayev quotes from washed up theorist Francis Fukuyama to stress that “only three decades later,” his “anticipation did not come true.” He is keen to “critically reassess” the Eurasian model of security, now combining Europe and Asia, as most experts who prepared a detailed report on the Top Ten risks for Eurasia in 2020 agree.

Nazarbayev does have a road map for peace in the 21st century, via a manifesto he presented at the UN. That would be constituted as a global alliance of leaders for a nuclear-free world – complete with global summits dedicated to nuclear security. He can speak like that with the “moral right” of having closed one of the world’s major nuclear arsenals – Kazakhstan’s.

What’s key as much for Nazarbayev as for Xi and Putin is that Belt & Road, the Eurasian Economic Union, the European Union, the Shanghai Cooperation Organization, the Association of Southeast Asian Nation – all these initiatives and institutions – should be on overdrive, together, creating multiple negotiation tracks, all geared towards Greater Eurasia. And what better platform to advance it, conceptually, than the Astana Club?

0 thoughts on “The road toward Greater Eurasia”