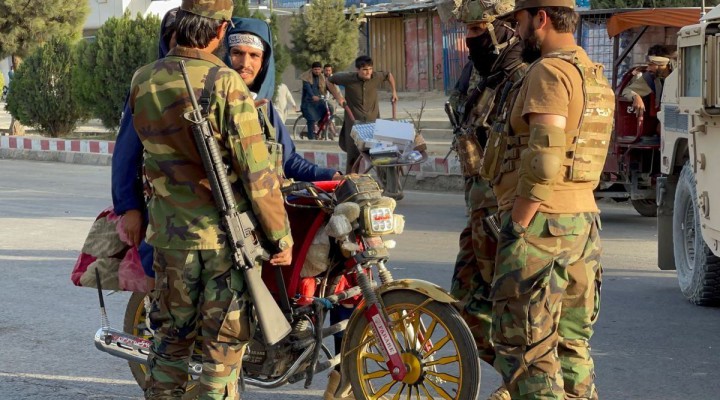 It was 20 years ago today. Asia Times published Get Osama! Now! Or Else…The rest is history.

Retrospectively, this sounds like news from another galaxy. Before Planet 9/11. Before GWOT (Global War on Terror). Before the Forever Wars. Before the social network era. Before the Russia-China strategic partnership. Before the Dronification of State Violence. Before techno-feudalism.

Allow me to get a little personal. I was back in Peshawar – the Islamic Rome, capital of the tribal areas – 20 years ago after a dizzying loop around Pakistan, tribal territory, a botched smuggling op to Kunar, biding time in Tajikistan, arriving by Soviet helicopter in the Panjshir valley, a harrowing road trip to Faizabad, and a UN flight that took ages to arrive.

In the Panjshir, I had finally met “the Lion”, commander Masoud, then plotting a counter-offensive against the Taliban. He told me he was fighting a triad: the Taliban, al-Qaeda and the Pakistani ISI. Less than three weeks later he was assassinated – by two al-Qaeda ops disguised as a camera crew, two days before 9/11.

No one, 20 years ago, could possibly imagine the subsequent slings and arrows of outrageous – terror – fortune. Two decades, $2.3 trillion and at least 240,000 Afghan deaths later, the Taliban are back where they were: ruling Afghanistan. Masoud Jr in theory leads a “resistance” in the Panjshir – actually a CIA ops channeled through CIA asset Amrullah Saleh, former Afghan Vice-President.

Al-Qaeda is a harmless skeleton, even rehabilitated in Syria as “moderate rebels; the new bogeyman in town is ISIS-K, a spin-off of the Islamic State in “Syraq”.

After negotiating a stunning package deal with the Taliban, the Empire of Chaos is concluding a humiliating evacuation from the land it bombed into democracy and submitted for two decades. Once again the US was de facto expelled by a peasant guerrilla army, this time mostly consisting of Pashtuns, descendants of the White Huns – a nomad confederation – as well as the Sakas, nomadic Iranic peoples of the Eurasian steppes.

ISIS-K, the new viper’s nest, opens multiple Pandora boxes that may lead to the new incarnation of the Forever Wars. ISIS-K has claimed responsibility for the horrific Kabul suicide bombing.

ISIS-K is apparently led by one ghostly emir Shahab al-Mujahir (no photo, no biography details), supposed to be an urban warfare expert who previously worked as a mere mid-level commander for the Haqqani network.

In 2020 media-savvy ISIS-K released one of his audio messages in Pashto. Yet he may not be Pashtun, but actually from some latitude in the Middle East, and not fluent in the language.

Even CENTCOM commander Gen Mackenzie has admitted that the US military are sharing intel on ISIS-K with the Taliban – or rather vice-versa: Taliban spokesman Zahibullah Mujahid in Kabul stressed that they warned the Americans in the first place about an imminent threat to the airport.

The Pentagon-Taliban collaboration is by now established. The perennial CIA shadow wars are a completely different ball game.

I have shown in this in-depth investigation how the top priority for the Taliban is to target the ramifications of the CIA shadow army in Afghanistan, deployed via the Khost Protection Force (KPF) and inside the National Directorate of Security (NDS).

The CIA army, as I explain, was a two-headed hydra. Older units harked back to 2001 and were very close to the CIA. The most powerful was the KPF, based at the CIA’s Camp Chapman in Khost, which operated totally outside Afghan law, not to mention budget.

The other head of the hydra were the NDS’s own Afghan Special Forces: four main units, each operating in its own regional area. The NDS was funded by the CIA and for all practical purposes, operatives were trained and weaponized by the CIA.

So the NDS was a de facto CIA proxy. And here we have the direct connection to Saleh, who was trained by the CIA in the US when the Taliban was in power in the late 1990s. Afterwards, Saleh became the head of the NDS – which happened to work very closely with RAW, Indian intel. Now he’s a “resistance leader” in the Panjshir.

My investigation was confirmed right away by the deployment of Task Force Pineapple last week, an operation carried out by CIA/Special Forces to extract the last sensitive intel assets from Kabul who were being chased by the Taliban.

In parallel, serious questions are piling up regarding the Kabul suicide bombing and the immediate MQ-9 Reaper response targeting an “ISIS-K planner” in eastern Afghanistan.

This page has been carefully tracking prime information regarding what could be described as the Abbey Gate Massacre, not surprisingly buried by Western mainstream media.

The You Tube channel Kabul Lovers, for instance, is engaging in street-level journalism that puts to shame every multi-million dollar TV network. A military officer who examined the bodies of many of the bombing victims at Kabul Emergency Hospital claimed that most were not victims of the suicide bombing: “All victims were killed by American bullets, except maybe 20 people out of 100.” The full, original report, in Dari, is here.

Scott Ritter, for his part, has emphasized the need of “perspective” on the claimed drone strike against ISIS-K “from an actual drone expert like Daniel Hale, but they put him in jail for telling the truth about how bad our drone program actually is when it comes to killing the right people.”

By now it’s established that contrary to Pentagon claims, the drone strike hit a random house in Jalalabad, not a moving vehicle, and there was “collateral damage”: at least 3 civilians.

And the civilian death toll of a subsequent missile strike on another alleged “ISIS-K planner” in a car in Kabul is already at 9 – including 6 children.

The much-lauded Pentagon offensive against ISIS in “Syraq” has been derided all across the Axis of Resistance as a massive farce.

Over the years, we have had exposés coming from Moscow; Tehran; Damascus; Hezbollah; and some of the People’s Mobilization Units (PMUs) in Iraq.

Hezbollah’s secretary-general Hassan Nasrallah has repeatedly asserted how “the US have been using helicopters to save ISIS terrorists from complete annihilation in Iraq/Syria and transporting them to Afghanistan to keep them as insurgents in Central Asia against Russia, China and Iran.”

The extremely well informed Russian Special Presidential Envoy for Afghanistan, Zamir Kabulov, has pointed out that Russia had received the same information from local tribal leaders. Even former President Hamid Karzai – now a key negotiator forming the next Taliban-led government in Kabul – has branded ISIS-K a “tool” of the United States.

It’s important to remember that ISIS-K has become much more powerful in Afghanistan since 2020 because of what I describe as a shadowy transportation ratline from Idlib in Syria to Kunar and Nangarhar in eastern Afghanistan.

Of course there is no smoking gun – yet: but what we do have is a serious working hypothesis that ISIS-K may be just another CIA shadow army, in collaboration with the NDS.

All that, if confirmed, would point to a dark future: the continuation of the Forever Wars by other means – and tactics. Yet never underestimate the counter-power of those no-nonsense descendants of White Huns and Sakas.

0 thoughts on “Enduring terror forever: from al-Qaeda to ISIS-K”