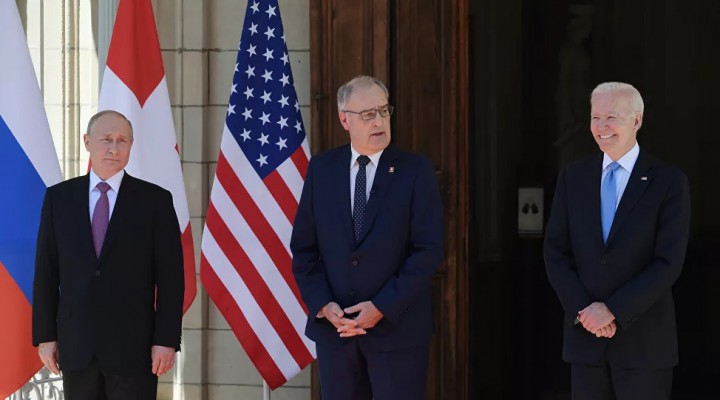 The Biden administration is looking into an alleged hack attack on Republican National Committee (RNC) computers, which has been attributed by some US media outlets to Russia. What’s behind the timing of the recent accusations, and how could it influence Russo-American relations following the 16 June Putin-Biden summit?

On 6 July, Bloomberg alleged that the reported hacker attack on the RNC was conducted by the same group said to have been behind the alleged breach of the Democratic National Committee (DNC) servers in 2016. According to the US Intelligence Community (IC), the perpetrators were a group named “APT29” or “Cozy Bear”, linked by the IC to the Russian Foreign Intelligence Service, something that Moscow dismissed as an absurd claim.

The allegations of Russian government involvement in the suspected cyberattack on the RNC were denied by Kremlin spokesman Dmitry Peskov. For his part, Russian Deputy Foreign Minister Sergei Ryabkov presumed that the US media’s “fairy tales” about Russia were specifically designed to hurt relations between Moscow and Washington.

Meanwhile, the RNC specified in its official statement on Tuesday that although its contractor Synnex “had been hacked”, no access was gained to any of the committee’s data.

“Once again, our media is citing anonymous sources to accuse Russia of a cyber-attack without any evidence“, says Earl Rasmussen, executive vice president of the Washington-based think tank Eurasia Centre. “Did we not learn from 2016, where there was no evidence of a hack at the Democratic National Committee (DNC), nor was it Russia. Declassified sworn testimony from senior intelligence officials and senior executive of the cyber company CrowdStrike confirmed that there was no evidence of a hack or that Russia was involved”.

According to Rasmussen, “the only reliable evidence and only somewhat credible forensic analysis” was carried out by Veteran Intelligence Professionals for Sanity (VIPS). One of its members, former NSA Technical Director William Binney, proved that “the DNC compromise was a result of a leak and not a hack”, the scholar points out.

He believes that the mainstream media’s effort to promote evidence-free disinformation could be caused by “elements that are seeking to disrupt any type of rapprochement and to continue to support global chaos”.

The “Russian hackers” narrative keeps the image of Russia as an enemy alive, believes Dr Paul Craig Roberts, an American economist and former assistant secretary of the Treasury for economic policy under President Ronald Reagan.

The US has instrumentalised the “Russian threat” to maintain control over Europe, to proceed with the growing US spying on the American population to the power and profit of the US military-security complex, according to the economist. The military-security complex remains stuck to the “Russian threat” narrative since any lessening of this perceived “threat” reduces the budget and power of the complex and the importance of NATO and the US foreign policy complex, he explains.

Whatever Washington says, it is unwilling to build bridges with Moscow on an equal basis, according to the economist: “What Washington means by the US and Russia cooperating is that Russia cooperates with Washington”, Dr Roberts notes. “Washington does not see it as a reciprocal relationship”.

Rasmussen agrees that Washington’s “dominance” remains a cornerstone of America’s foreign policy, which hinders any attempts to maintain constructive and equal relations between the US and Russia.

“Neoconservatives and intelligence entities that seek to maintain US hegemony and desire more conflict to put additional political pressure on Russia or China have an interest”, the scholar notes. “Moreover, some technology companies have financial stakes and often may be the indirect beneficiaries”.

© AFP 2021 / YURI KADOBNOV
A man walks in front of a tower of the Kremlin and the Russian Foreign Ministry building in central Moscow on September 10, 2020.

What’s Behind the Timing of Latest Hacking Allegations?

The timing of the latest accusations against Russia is “very interesting, as we just finished a somewhat positive summit and finally, primarily due to Russia’s initiative, have begun work on a joint Cyber Security Agreement, and now this”, Earl Rasmussen notes.

The reports discussing the supposed RNC attacks came on the heels of a summit between President Vladimir Putin and his American counterpart Joe Biden, at the latter’s request, on 16 June in Geneva. The meeting was described by the sides as constructive and fruitful.

Rasmussen recalls that although he did not expect much from the summit, it ended up “to be somewhat productive or at least had that initial indication”. The recent events have once again proved that many in Washington do not seek rapprochement.

“It is unfortunate, but we still have many lingering ‘Cold War warriors’ that are very influential in government”, he admits. “In my view, their objectives are not the true interest of the nation or its people”.

For his part, Dr Roberts believes that the Putin-Biden meeting has not eased simmering tensions between Moscow and Washington since Donald Trump’s presidency. However, this does not appear to be Trump’s fault. The economist draws attention to the fact that ex-President Donald Trump was labelled as a “Putin agent” specifically because he wanted to mend fences with Russia.

The Trump-Russia investigation, conducted by Special Counsel Robert Mueller, and accompanied by uncorroborated media claims that the former president had “colluded” with Moscow, was “orchestrated to prevent Trump from working to normalise relations and to drive him from office”, the economist explains.

“When the Russiagate investigation failed to materialise formal charges against Trump, Trump was impeached”, the ex-Reagan official points out. “When impeachment failed, his re-election was stolen. When Trump voters protested the stolen election, it was labelled an ‘insurrection’ and another effort was made to impeach Trump after he was out of office. Clearly the message is to all succeeding presidents: If you try to normalise relations with Russia you will be removed from office”.

This is not the first time that a US president has been prevented from improving ties with Moscow, Dr Roberts continues. According to him, there is a peculiar trend showing that “every US president who worked to reduce tensions between the two countries was targeted”: President John F. Kennedy was assassinated; President Richard Nixon was “politically assassinated with Watergate”.

Ronald Reagan “had to push through his effort with [then Soviet leader Mikhail] Gorbachev over the opposition of the CIA and much of Reagan’s conservative base”, the economist notes. According to Dr Roberts, “some insiders believe that the failure of [Jimmy] Carter’s rescue attempt of US hostages in Iran was orchestrated to diminish his influence and further inflame tensions over the Soviet invasion of Afghanistan”.

“The way Washington works, there has to be an enemy”, the former official underscores. “Russia is the chosen enemy. Because of the long Cold War and ‘Soviet threat’, Americans are accustomed to Russia as an enemy”.